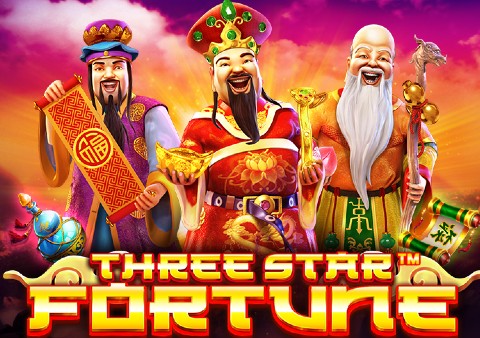 Pragmatic Play is the latest provider to invite players on a journey to Asia in the Three Star Fortune slot. There’s nothing very complicated about this 5 reel, 10 payline game though. Central to the action are the wild symbols that can appear on the middle 3 reels. When one hits it expands to fill the whole reel as well as awarding a respin. Straightforward it may be but Three Star Fortune is a highly volatile slot. Found out more in our detailed Three Star Fortune review.

While many developers are packing their games with more and more extras (yes, we’re looking at you, Blueprint Gaming), Pragmatic Play has gone in the opposite direction in Three Star Fortune. There’s not a huge amount on offer as far as features go here with the exception of the expanding wilds and respins. Let’s have a closer look at the Three Star Fortune features.

There are 3 wild symbols which appear on their own reel (the 3 middle reels). After a wild has expanded, it locks in position and the Respin feature is triggered. A free respin is awarded. If another wild lands on that respin, it too is held and another respin follows.

The prefect scenario is to land a stacked wild on all of the middle 3 reels with the respin to follow. Land a decent combination on either side of the block of wilds and the coins can really fly. That’s pretty much it as far as gameplay in Three Star Fortune is concerned.

Three Star Fortune is played using a 5 reel, 3 row game engine that offers 10 paylines. Land a winning combination by landing 3, 4 or 5 matching symbol in one of the those paylines from left to right, starting from reel 1 or reel 5.

You can play from 10p to £100 per spin. There are ample opportunities for autoplay in Three Star Fortune too. Click on the autoplay button beneath the spin button and you can set up to 100 auto spins. You can also set win and loss limits as well as end the autoplay when you trigger the feature. Quick and turbo spin modes are also available. If you want to keep things hands on you can also spin by pressing the space bar. It’s all very straightforward to manage.

The gameplay here might be rather basic but Three Star Fortune can still pack a big payout punch. This is a very volatile slot. You could endure lengthy winless spells. If the trio of stacked wilds fall together it’s possible to hit it big on a single spin. The maximum payout stands at 1,000 x your total stake.

The Three Star Fortune RTP is 96.27%. That’s not too bad a figure and bears comparison with many other slots. It’s not the highest value you’ll find but there are plenty of other slots that offer worse return to player rates. 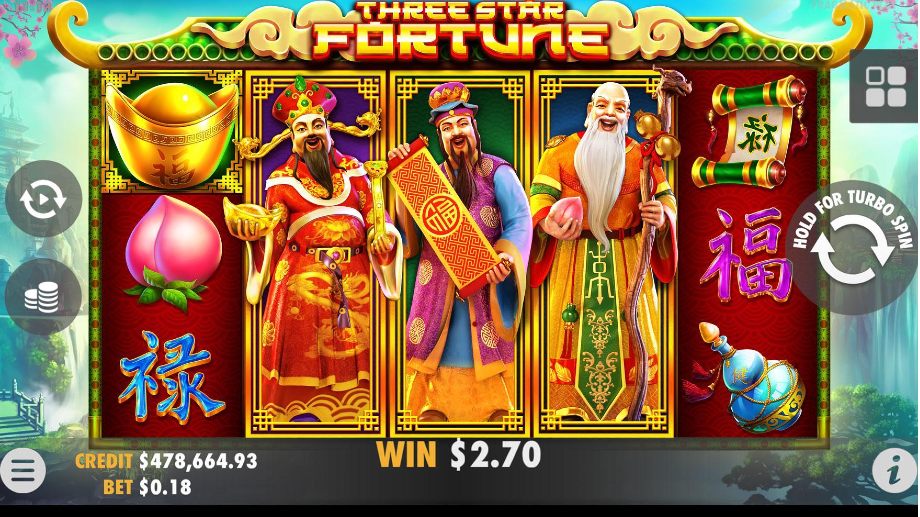 There’s a strong Asian feel to the Three Star Fortune slot. Behind the reels you’ll find a traditional rural scene of mountains, waterfalls and pagoda-style building. The visuals are bright, colourful and very clear. The soundtrack has a very traditional Asian feel too. Combined, they create a very decent atmosphere.

On the deep red reels, you’ll find Asian character symbols instead of the usual royal values. They’re joined by a potion bottle, a scroll and pink fruit. The most rewarding symbol is the gold pot. Land 3, 4 or 5 of these in combination and you’ll win a payout equal to 5, 20 or 25 times your total stake.

Three Star Fortune comes with 3 different wild symbols. These are the 3 smiling elder gentlemen who each sport rather impressive facial hair. These can only land on reels 2, 3 or 4. As usual, they replace all the standard symbols when they form part of a winning combination. That’s not all they can do though as they expand and trigger the Respin feature (more info above).

The Pragmatic Play game interface is very simple to use. Set bet levels via the + and – buttons next to the spin button. The i tab opens up the paytable. If you amend the stake level while the paytable is open it shows the new payout levels.

There’s also a setting option which allows you to make changes to the sound effects and music as well as adjust bet sizes and autoplay.

The Three Star Fortune mobile version offers the same simple but volatile gameplay as the desktop slot. The colourful design and straightforward features are well suited to mobile or tablet play.

You might expect a slot with such a limited array of features to be rather dull. We didn’t find that to be the case though. The stacked wilds come along just often enough to keep things interesting. Be warned though, Three Star Fortune is a high variance slot so you could see some big bankroll swings.

The design here impresses as we’ve come to expect from Pragmatic Play. If you like slots with plenty of variety and bonus features, this probably won’t be for you. For that, you can try Great Rhino Megaways which is Pragmatic Play’s first Megaways slot.

If you like simple, volatile gameplay with an Asian flavor, that’s what you’ll get with Three Star Fortune.

What is the Three Star Fortune slot RTP?

The Three Star Fortune slot return to player rate is 96.27%. That’s not an enormous percentage but is still better than you’ll find in many other similar slots. For every £100 wagered, £96.27 is returned on a long term average.

What is the max win in Three Star Fortune?

There’s isn’t a free spins round in Three Star Fortune. Instead, you can expect plenty of respins. These are awarded every time a stacked wild symbols lands on any of the middle 3 reels. You can land up to 3 respins in a block with potential big results.