Blast off into space and try and track down prizes of up to 25,000 x stake in the Star Bounty slot, an explosive sci-fi-themed game from Pragmatic Play. Highlights of this intergalactic adventure include tumbling reels, missiles that can turn a random assortment of symbol positions wild and a bonus round that awards up to 24 free spins complete with wild multipliers that can reach 27x. Superbly designed, it comes with a synth heavy backing track that ramps up the atmosphere. With a 96.61% RTP rate, discover all there is to know about this super volatile slot in our in-depth Star Bounty review.

Where to Play Star Bounty Slot

The Star Bounty slot is played on a 6 reel grid that offers 4,096 ways to win. To create a winner, land 3 or more matching symbols or wilds on adjoining reels, starting from reel 1.

You can play Star Bounty at stake levels to suit virtually all bankrolls. Stake sizes range from between 10p and £100 per spin. Use the + and – buttons next to the spin button to adjust. You can set between 10 and 1,000 autospins if required. There are also options for quick and turbo spin mode if required. There aren’t any win or loss stop limits though so pay attention.

The gameplay in Star Bounty is relatively simple. It can deliver a knockout payout punch though. The maximum payout here is a massive 25,920 x your total stake.

As you might imagine from that big max win number, the Star Bounty volatility is very high. We’re in 10 out of 10 variance territory here. The Star Bounty RTP is 96.61% which is an above average figure. 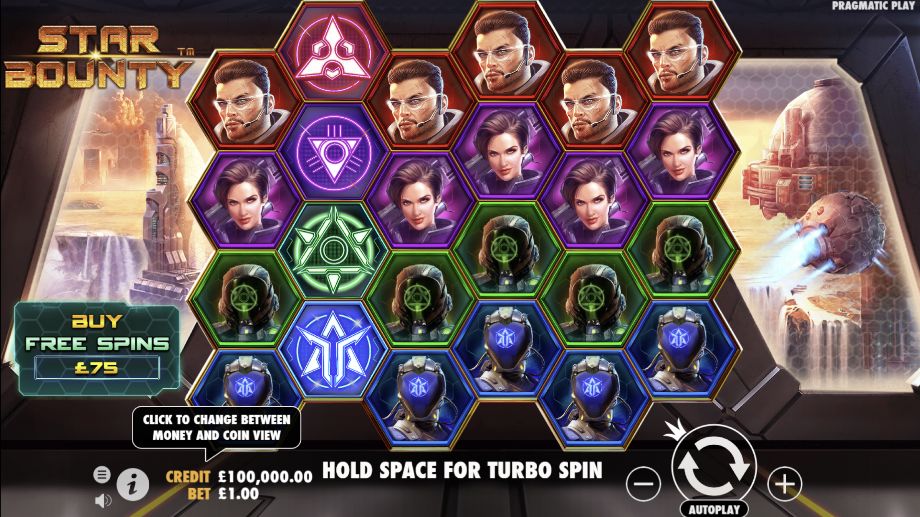 The design in the Star Bounty slot is terrific. A futuristic planet and floating spacecraft form the backdrop to the action.  With a sci-fi theme, it feels like you’re on the Starship Enterprise used in the Star Trek TV series and films.

There’s a fresh, comic book quality to the visuals which are very nicely done. There’s an electro soundtrack playing in the background which matches the theme perfectly. It really sparks into life during the free spins. The synth sounds might not be for everyone but there are options to play with sound effects, ambient noise or a combination of both.

On the reels you’ll find an assortment of hexagonal symbols including A to J royals, a quartet of space insignia symbols, a pair of aliens and male and female bounty hunters. The male bounty hunter symbol is the most rewarding, paying 1, 2, 7.5 or 15 x your total stake if you land 3, 4, 5 or 6 in combination.

There is also a colourful gem-like wild symbol which appears on all reels bar reel 1. It substitutes for all symbols except the free spins scatter to create winning combinations.

Pragmatic Play has created a Star Bounty mobile slot. Very impressive it is too. The design is as classy as the desktop version. You’ll find the same high variance gameplay in the mobile version too. It works rather well.

The theme here might be futuristic but you’ll find an array of classic features in the Star Bounty slot. The action comes with tumbling reels, randomly added wilds and of course, a free spin round where the wilds can come with multipliers attached.

As well as the standard wild, you’ll also see the missile wild. That can land on reels 2, 3 and 4 only. Whenever these symbols appear, they fire off a volley of lasers in the Missile feature.

Any symbol position that is hit by a laser turns wild. A new payout calculation the follows with the wilds in position. Basically, you get extra wild symbols randomly. 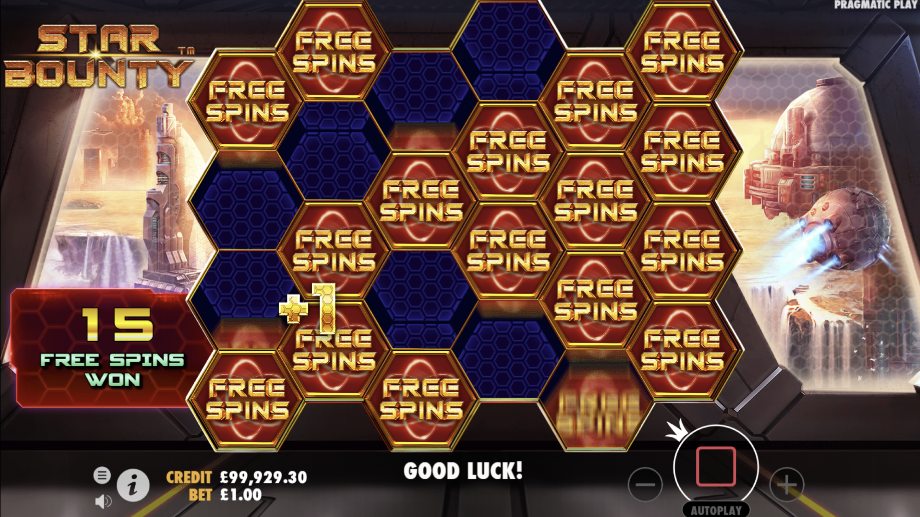 Land more than 1 multiplier wild in the same winner and their values are combined. For example, a 2x wild and 3x wild would combine to offer a 6x payout boost. Three 3x multipliers would result in a 27x multiplier boost (3 x 3 x 3 = 27).

Like many slots these days, there’s a Buy Free Spins feature. This allow you to buy your way into the Free Spins feature for 75 x your total stake. If you use it, you will get between 3 and 6 free spins symbols to trigger the feature. Unfortunately though, this option isn’t available in the UK.

The sci-fi theme remains a popular one with developers and players alike. Pragmatic Play has created a perfectly solid example in the Star Bounty slot.  The design here is from the top drawer, in terms of both sound and imagery.

The gameplay isn’t hugely innovative but the tumbling reels, wilds and free spins means there’s no shortage of action. With a high RTP of 96.61% and max wins of 25,920 x stake per spin, you have a very playable take on the classic space-themed slot.

If you like the space theme and prefer something simpler, NetEnt’s Starburst slot is a must. Another good option is the Diamond Vortex slot by Play ‘n GO which has a similar look and feel.

What is the Star Bounty RTP?

You might expect a slot with high variance and a big maximum win to be a little skinny on the RTP rate. That’s not really the case here though. The Star Bounty return to player rate is 96.61%.

What is the Star Bounty max win?

This slot has the potential to deliver big rewards though with a maximum payout of 25,920 x stake. However, it’s a high variance game and classed as 10 out of 10 by developer Nolimit City.

Is there a Star Bounty free spins feature?

Yes, trigger the Free Spins feature by landing 3 or more scatters on the same spin. You’ll then play a respin round to see how many free spins you’ll receive. You could land up to 24 free spins complete with 2x and 3x wild multipliers which can combine up to 27x for even bigger boosts.

How does the Tumble feature work?

When you get a winning combination, the contributing symbols disappear to be replaced by new ones. This allows for another chance to form a win. The Tumble feature continues until no more new wins are formed.