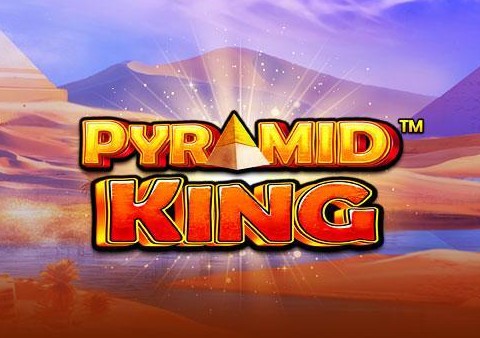 Pay homage to ancient Egyptian royalty and try and grab a jackpot or 2 in the Pyramid King slot. Created by Pragmatic Play, this desert adventure is played using a 5 reel, 25 payline game engine and comes with a pair of age-old features. There’s a free spins round complete with an expanding symbol that fills the reels whenever it appears. There is also a streak respin bonus that awards cash prizes. You can also win 3 potential jackpot awards that can reach 1,000 x your total stake. Find out more in our detailed Pyramid King review.

Where to Play Pyramid King Slot

The Pyramid King slot comes with a classic slot theme and a couple of classic slot features. You can look forward to free spins with a special expanding symbol, There is also a respin bonus where big jackpot prizes can supplement the standard payouts.

The Free Spins feature is triggered by landing the scroll symbol on reels 1, 3 and 5 on the same spin. You’ll also receive a payout equal to your total stake. On offer here are 10 free spins. Before they start, 1 symbol is picked at random. Each time this symbol appears during the free spins round, it expands to fill the whole of that reel.

Winning combinations made up of the expanding symbol don’t have to be on adjacent reels either. You can re-trigger another round of free spins if you land 3 scrolls. There are no limits to how many free spins you can play with either.

You can also activate the second bonus, the Money Respin feature, from within the free spins round as well as in the base game.

To trigger this classic streak respin round, you’ll need to land 6 or more of the money symbol (the camel silhouetted against the sun) on the same spin. The triggering money symbols are held and 3 respins follows. The reels on the respins are made up of blanks or money symbols. Land a money symbol and it is held and the respins reset to 3.

The Money Respin feature continues until you run out of respins or you’ve filled the whole of the reels with money symbols. You’ll see that each money symbol comes with an associated cash amount or a minor or major jackpot of 30 x or 100 x your total stake attached. These are all added together at the end of the respins to give you an overall prize.

If you managed to fill all 15 positions during the respins, you’ll win all the cash prizes as per usual as well as the Grand Jackpot of 1,000 times your total stake.

The Pyramid King slot is played using 5 reels, 3 rows and 25 paylines. A win is created by landing 3, 4 or 5 matching symbols on adjacent reels beginning from the leftmost reel (reel 1).

You can play from between 25p and £125 per spin so it’s suitable for pretty much all bankrolls. If you want to use autoplay you can do so. You can set between 10 and 1,000 spins. You can also play in quick or turbo mode if you want to really get things moving.

The Pyramid King slot RTP is 96.5% which is a perfectly solid number. We’ve played some slots with this combination of features where the volatility has been scorching hot. The variance here isn’t quite as high but it’s still enough to keep things interesting. We’d put the Pyramid King volatility in the medium to high range at around 7 out of 10. The maximum win is 1,000 x stake from the Grand Jackpot and 500 x stake from each spin or free spin.

The Pragmatic Play game engine is a good one. The i button opens up a paytable and game info page which is packed full of information. Payouts are given in cash and are amended in real time as you adjust your bet size. 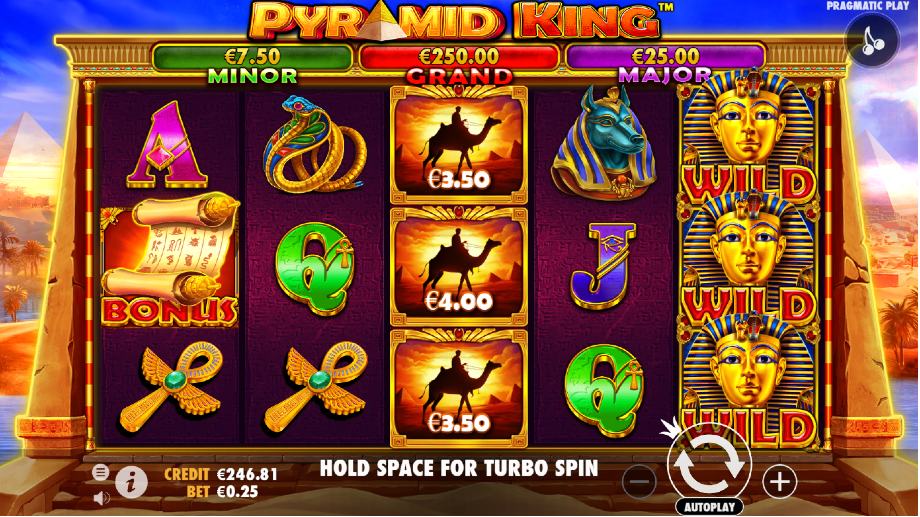 The sound and visuals in Pyramid King are terrific. With pyramids, desert sands and the mighty Nile in the background, the reels are enclosed within a stone, pyramid-style structure.

The regal purple reels feature A to J royals as well as a selection of symbols relating to the Egyptian theme. In order of value are a gen-encrusted ankh cross, a golden serpent and a ruby ring. The most rewarding standard symbol is the jackal god Anubis. Land 3, 4 or 5 of these on a payline for a payout of 1, 10 or 20 times your total stake.

The Tutankhamun-style burial mask is the game’s wild. This can appear on all 5 reels and substitute for all the standard symbols in a winning combination. The wild can also be rewarding in its own right, deliver payouts of 1, 10 or 20 x your total stake if you land 3, 4 or 5 on a payline.

The symbols are beautifully drawn and packed full of detail. They’re bright and colourful but still super sharp. Accompanying the on-screen action is a cracking soundtrack that’s a perfect fit for the Egyptian theme. This ramps up to an up-tempo version in the free spins round. It could come straight out of modern-day Cairo souk. It’s all very good.

The Pyramid King mobile slot offers the same blend of high-class sound and visuals and top features as the desktop version. It works really nicely on the smaller screen and is very playable.

We were impressed by this trip back to the land of the Pharaohs. The setting and combination of features aren’t overly innovative but it’s all put together very nicely. Pragmatic Play has packed plenty of detail into the design and the free spins and streak respins are a top combination.

Ancient Egypt-themed slots remain hugely popular. However, the special expanding symbol in the Free Spins feature has been seen many times before, as in Book of Dead by Play ‘n GO. Pragmatic Play actually offers you the John Hunter and the Book of Tut slot which is a more volatile version of Pyramid King but offers 5,000 x stake payouts per spin.

What is the Pyramid King slot RTP?

The Pyramid King return to player rate is 96.5%. That’s a pretty solid figure and puts it in the medium range. On average, for every £100 wagered on Pyramid King, £96.5 is returned in prize money. With the variance being medium to high, it’s not as volatile as other similar slots so you should get more frequent wins.

What is the Pyramid King max win?

The maximum payout per spin in the Pyramid King slot is 500 x your total stake. This is achieved by a screen full of jackal and/or wild symbols. In the Money Respin feature, filling all 15 positions with money symbols will land you the Grand Jackpot which is worth 1,000 x your total stake.

What are the Pyramid King bonus features?

There are 2 cracking features in Pyramid King. There’s a Free Spins feature with expanding symbols as well as a Money Respin feature where you can land cash prizes as well as jackpots which range from between 30 and 1,000 x your total stake.