Head to wilds of Scandinavia and try and harness the might of a Norse deity in the Power of Thor Megaways slot. This 6 reel game from Pragmatic Play is played using tumbling reels and a game engine where the number of Megaways can reach up to 117,649. Keep a special eye out for Thor’s Hammer which turn all the symbols that appear directly below into wilds. The Free Spins feature awards between 10 and 30 free spins. Boosting your chances here is an increasing multiplier which increases by 1 with each tumbling win. Find out more about this hugely volatile slot in our full Power of Thor Megaways review.

Where to Play Power of Thor Megaways Slot

The Power of Thor Megaways slot uses the Megaways mechanic. The number of symbols on each reel changes with each spin. This alters the number of Megaways that are active. The more symbols, the more winning chances. At their maximum, the reels here will offer 117,649 ways to win.

Winning combinations are formed by landing 3 or more matching symbols or wilds on adjoining reels, starting from reel 1. Stakes range from 20p to £100 per spin. There’s a Quick Spin and Autoplay mode is required. Interestingly, there’s a Battery Saver mode which reduces animation speed and saves your battery life.

The Power of Thor Megaways RTP is 96.55% which is much better than average. In fact, most Pragmatic Play slots have a 96.5% RTP or above. The Norse god can unleash some extremely volatile action. The variance is extremely high. I’d put the volatility at the maximum 5 out of 5 so tread carefully. The most you can win from a single spin here is 5,000 x your stake. 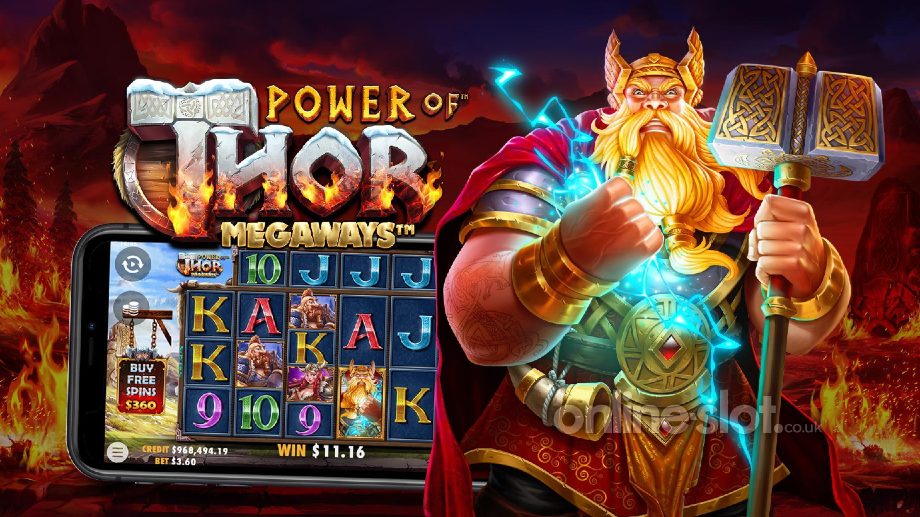 With a Norse mythology theme, the sound and visuals in the Power of Thor Megaways slot are excellent. The game is based on the hammer-wielding god, Thor, who is the god of lightning and thunder. With his hammer, Mjölnir, he was known as the fiercest of warriors.

The backdrop consists of snow-capped mountains and a forest. Complementing the imagery is a stirring orchestral soundtrack. It’s an ideal match for a slot with a Norse saga theme. Overall, the design comes together very nicely.

The reels are made up of Norse-style A to 9 royals and a quartet of higher value character symbols. These 4 are done comic book-style and are superbly drawn. Top of the bill as far as payouts go is the portly figure of Thor. Land 6 of the big man on adjoining reels and you can look forward to an award of 20 x your total stake.

There’s also a wild symbol that can appear in the top position of reels 2, 3, 4 and 5. So too can Thor’s Hammer which triggers a stacked wild feature. Finally, there’s a scatter which can trigger the Free Spins feature.

There’s plenty to like about the Power of Thor Megaways mobile slot. The sounds and visuals are certainly up to the job if you’re playing on a tablet or mobile, even given all the moving parts of the Megaways game engine. It is of course on desktop devices like laptops and PCs.

There’s plenty going on in this Norse epic, starting with the tumbling reels game engine. There’s a total of 3 bonus features. Thor’s Hammer can deliver some wild action and there’s also a free spins feature complete with expanding multiplier. 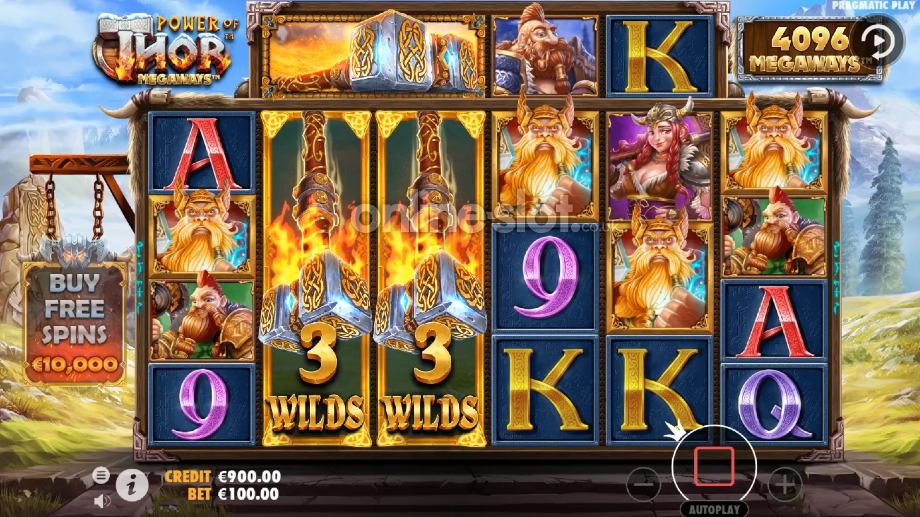 The Thor’s Hammer symbol appears 2-wide and doesn’t offer any payouts. It can land at the top of reels 2, 3, 4 and 5. When the hammer does appear fully formed, the Hammer feature is activated. The symbols directly below Thor’s Hammer turn into wilds to give you wild reels. A payout consideration then follows with the new stack of wilds. 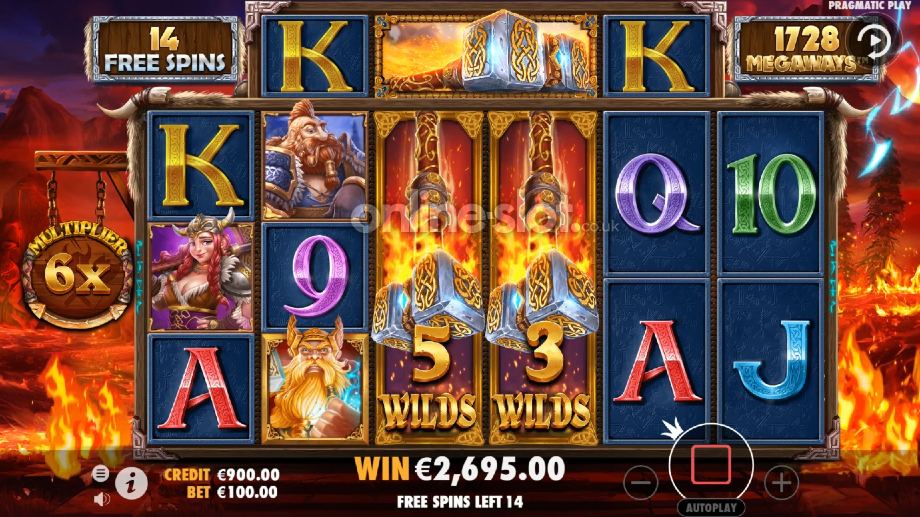 The main offering is the Free Spins feature. It’s triggered by landing scatter symbols that spell out the name THOR. This will get you the minimum allocation of 10 free spins. Each extra +4 scatter that lands on that triggering spins adds another 4 free spins to that total. The maximum number of free spins you can begin with is 30.

If you trigger between 10 and 18 free spins, you’ll have the opportunity to spin a wheel and gamble to try and increase that haul. If the gamble is successful, you’ll receive 4 more free spins. Lose the gamble and you’ll lose all your free spins. You can gamble your way to up to 22 free spins here.

The feature begins with a standard 1x multiplier. Each tumbling reel win increases that multiplier by 1. There’s no limit to how high the multiplier can go. It also doesn’t reset to 1x on a losing free spin/tumble. Land 3 scatters and you’ll add 4 more free spins to your total. You can trigger the Hammer feature from within the free spins for wild reels.

In some countries, there’s a Buy Free Spins feature. You can buy your way into the Free Spins feature for 100 x your total stake. If used, you will receive a random number of scatters which will give you between 10 and 22 free spins. You can also gamble your way to more free spins like if you triggered from the base game. This option isn’t available in the UK though.

I enjoyed this brush with the Norse gods. For starters, the design in the Power of Thor Megaways slot is terrific. The cartoon-style imagery and the sweeping soundscape deliver plenty of atmosphere.

The gameplay is pretty standard fare for a Megaways game but Thor’s Hammer and the wild reels that it can deliver are a tidy addition. And of course, free spins with the increasing multiplier are always worth landing.

On a positive note, the RTP of 96.55% is high. The variance is also high. However, what lets Power of Thor Megaways down is the max win potential. 5,000 x your total stake is a figure any of us would love to hit. If you compare to other Megaways slots, this is low.

What is the Power of Thor Megaways RTP?

The Power of Thor Megaways RTP rate is 96.5%. This is above average. The volatility is very high though so be warned. The bigger wins will come from the main bonus features.

What is the Power of Thor Megaways max win?

The maximum win in this Norse saga comes in at 5,000 x your total stake from a single spin. This can be won on a base game spin or in the free spins with the increasing multiplier.

How does the Hammer feature work?

When Thor’s Hammer appears fully on the top row, the Hammer feature is activated. The symbols below will transform into wilds to give you 2 wild reels. It can move after a tumble to give you more wild reels.

Are there any Power of Thor Megaways free spins?