Wilds and multipliers are the keys to success in the Jungle Gorilla slot, a 5 reel, 20 payline game from Pragmatic Play. Each time a special gold gorilla coin lands it adds to a multiplier above that reel. Land a winning combination that includes a wild and the multiplier from the meter above that reel is applied to your win. Land a win with more than 1  multiplier and their values are combined. Discover more about this wild rainforest adventure in our detailed Jungle Gorilla review.

Where to Play Jungle Gorilla Slot

The Jungle Gorilla slot uses a classic 5 reel, 3 row, 20 payline format. Land 3 or more matching symbols or wilds in a payline, starting from reel 1 to create a winner.

You can start this jungle adventure from between 20p and £100 per spin which means it’s suitable for players of pretty much all bankroll levels. Just use the + and – buttons next to the spin tab to adjust bet size. For autospins, click on the Autoplay button. You can set between 10 and 1,000 automatic spins here. You can also set quick or turbo spin mode if required. There’s also the option to adjust bet sizing, autoplay and sound effects via the settings tab. 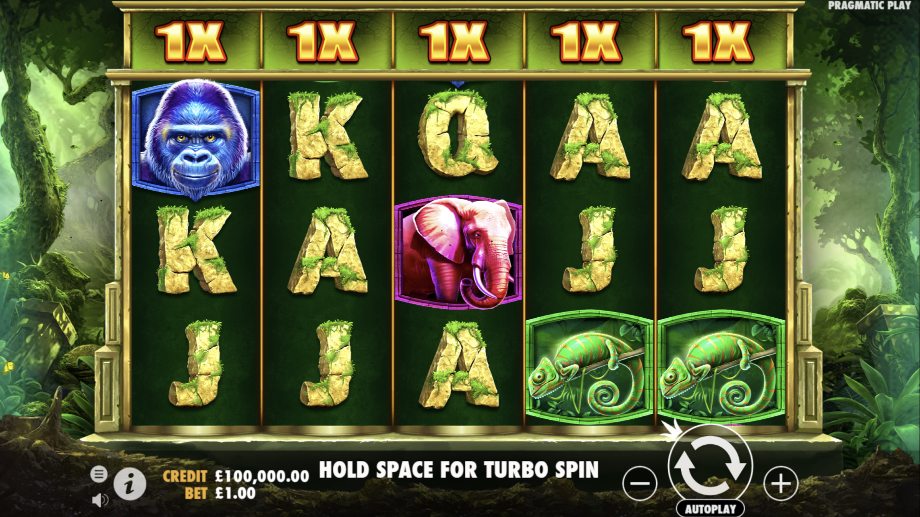 As usual for a slot from Pragmatic Play, the design in the Jungle Gorilla slot is very nicely realised. A dense, verdant, tropical jungle forms the backdrop to the reels.

The visuals are bright, bold and very colourful and stand out very nicely against the dark backdrop. As David Attenborough connoisseurs will know, gorillas and tigers live on different continents but that never seems to stop slot developers putting them together.

On those reels, you’ll find stone A to J symbols covered in jungle creepers. Potentially more rewarding are the 5 wild animals symbols. In order of value are a green lizard, a parrot, an elephant, a tiger and a gorilla. The gorilla is the most rewarding standard symbol, paying 1.25, 2 or 4.5 x your stake if you land 5 on a payline. Better still is the wild which delivers payouts of up to 25 x stake per payline.

There’s a bouncy backing track playing in the background while you spin. It fits the wild animal theme rather nicely. Overall, no complaints about the sound or images in Jungle Gorilla.  The simple gameplay and bold design combine nicely in the Jungle Gorilla mobile slot. It looks just fine on a small screen device and the gameplay is easy to follow.

Pragmatic Play has kept things pretty simple as far as the gameplay of the Jungle Gorilla slot is concerned. Overloaded with extras it ain’t. You won’t find free spins or any other traditional feature rounds in this jungle trek. Instead, look out for multipliers and plenty of them.

Multipliers and wilds form the basis of the action in Jungle Gorilla. The gold coin with the gorilla’s face is the scatter symbol. This acts in a slightly unusual manner. Every time a gorilla face scatter appears, a multiplier attached to that reel increases by 1x. You can see the amount of the multiplier in the meters above each reel. These start at 1x but can reach a maximum of 5x.

When you land a wild win, the multiplier tied to that reel (or reels) resets to 1x. The multipliers on the others reels remain active though. It’s possible to land payouts of up to 500 x stake from a single payline win. Overall, they can combine to give you 2,800 x stake wins per spin.

If you enjoy playing slots with plenty of variety then this won’t be one for you. The gameplay here is very straightforward. The wild multipliers can deliver some decent action though. The design is easy on the senses for a Pragmatic Play slot and the above average RTP is another tick in its favour.

It won’t be for everyone but if you like simple gameplay and a wild theme, you’ll get both in the Jungle Gorilla slot. If it’s gorillas you’re after, the Gorilla Gold Megaways from Blueprint Gaming is much better suited and offers much more in the way of features and max win potential.

What is the Jungle Gorilla RTP?

The Jungle Gorilla return to player rate is 96.57%. That’s well above average compared to most slot releases. It’s a medium variance slot meaning wins are balanced throughout the base game and single bonus feature.

What is the Jungle Gorilla max win?

The most you can win from a single spin in Jungle Gorilla is 2,800 x your total stake. The best chance of doing this is from the Multiplier Wilds features where multipliers up to 5x can appear on all 5 reels.

Where can I play the Jungle Gorilla slot?

The Jungle Gorilla slot game can be played at most casino sites as Pragmatic Play are a popular provider. Check out the best Pragmatic Play sites which have their full portfolio of slots.

Is there a Jungle Gorilla mobile slot?

Yes. Jungle Gorilla can be played on mobile, tablet and desktop devices that use iOS, Android and Windows operating systems. The colourful, high-definitions graphics and simple reel layout works well on smartphones.