Try and bag a red-hot jackpot of up to 5,000 x stake in the Mexican party that is the Hot Fiesta slot. Created by Pragmatic Play, it’s a bright and breezy 5 reel, 25 payline game that comes with some exciting extras. Base game highlights include wilds that can boost payouts courtesy of 2x, 3x and 5x multipliers. Land more than 1 and their values are combined. Trigger the Free Spins feature and you’ll play between 9 and 27 free spins. The wild multipliers are in play here too. Once they land, they shift to a new position on the reels with each free spin that follows. Find out more about this super volatile slot in our full Hot Fiesta review.

Where to Play Hot Fiesta Slot

The Hot Fiesta slot is played on a 5 reel, 3 row, 25 payline machine. Winners are formed in the standard manner for a slot with this format. Land 3, 4 or 5 matching symbols or wilds left to right on a payline, starting from reel 1 and you’ll grab yourself a winner.

Stake sizes range from 25p to £125 per spin in standard mode. It goes up to £175 if you have the Ante Bet feature in play. There’s a Turbo Mode as well as Autoplay facility which may not be available in your country (not in the UK from October 2021). 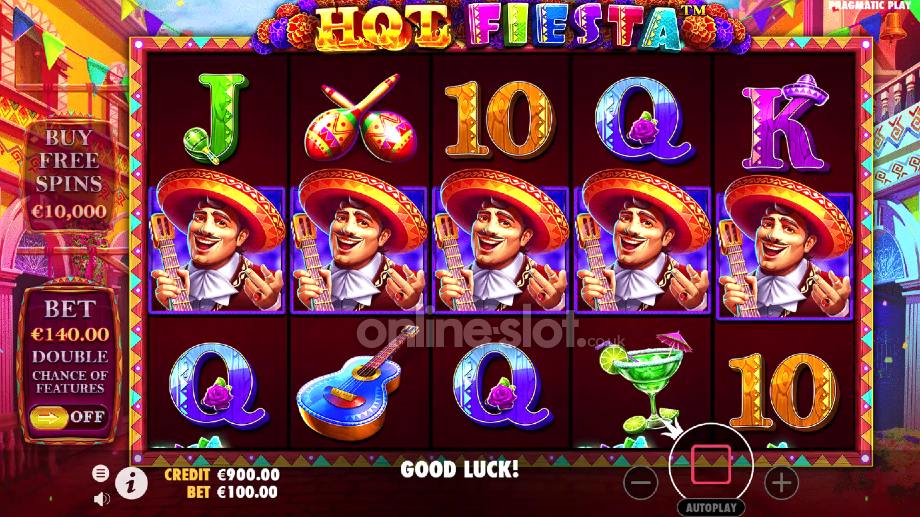 There’s a bright, colourful feel to the design in the Hot Fiesta slot. A Mexican street scene at fiesta time is the setting. You’ll see bright pink and orange apartments and fluttering confetti.

There’s a bouncy and brassy mariachi soundtrack blasting away in the background while you spin which fits the fiesta theme perfectly.  It might not be quite as glossy as some similarly themed slots but the design works just fine.

On the reels are A to 10 royals which appear alongside glasses of tequila, maracas, a guitar, a squeezebox and a senorita. The mariachi musician is the top standard symbol. Land 3, 4 or 5 of these across a payline and you’ll win an award equal to 2, 6 or 30 x your total stake.

The piñata donkey is the wild. This pays 2, 10 or 40 x your total stake if you land 3, 4 or 5 in combination. As usual, the wild substitutes for all the standard symbols. It can also come with multiplier attached. Rounding out the symbols is the fireworks bonus symbol.

You can join this Mexican party on all devices including mobiles, tablets and computers. The colourful visuals and straightforward gameplay are a good combination for a small screen slot and the Hot Fiesta mobile slot works very well.

The gameplay in Host Fiesta is fairly simple but there are 3 bonus features that can really liven up the action, starting with multiplier wilds. Then there’s a free spins feature where Sticky Roaming Wilds can deliver some explosive action. 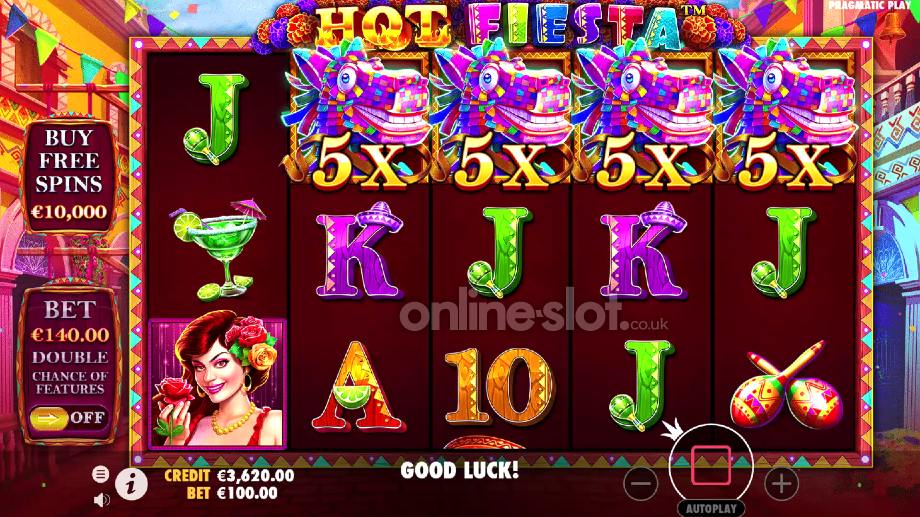 The multi-coloured piñata donkey is the game’s wild symbol. This can land on all 5 reels and substitute for all the standard symbols when it makes up part of a winning combination. These piñata donkey wilds can also come with multipliers of 2x, 3x and 5x attached. This is called the Multiplier Wilds feature. 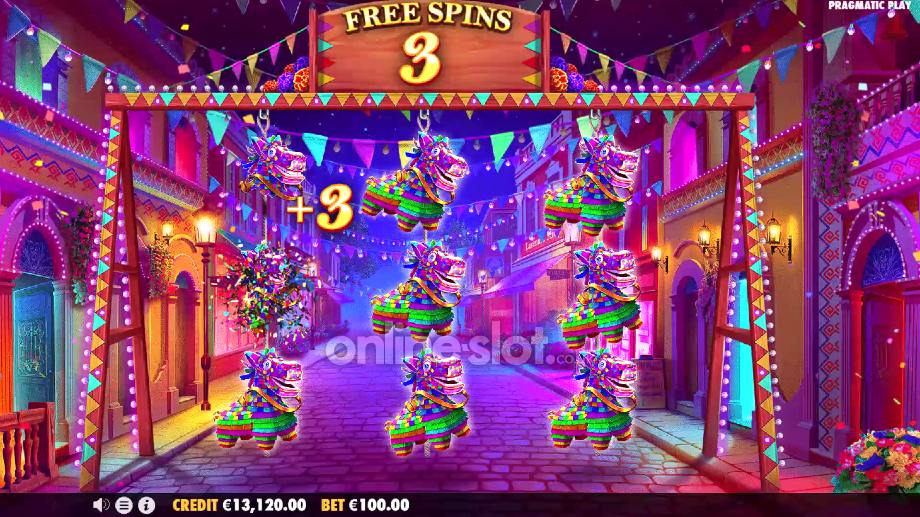 Land the fireworks symbol on reels 1, 3 and 5 on the same spin to activate the Free Spins feature. After receiving an award equal to 3x stake, you’ll see a 3×3 grid of piñatas which will explode to reveal how many free spins you’ve been awarded. This can range from between 9 and 27 free spins.

Whenever a wild piñata lands during the free spins, the wild remains in play, shifting to a new position with each new free spin. These multipliers once again come with 2x, 3x and 5x multipliers attached which can combine to award even bigger multiplier payouts.

In some territories, you’ll have the opportunity to increase your stake from 25 to 35 coins per spin and in the process activate the Ante Bet feature. This extra cost per spin doubles the chances of landing the Free Spins feature. For example, a £1 per spin bet in standard mode increases to £1.40 per spin if you have the ante bet active.

Hot Fiesta Review Summary – a Mexican party that is rather tame

The Hot Fiestas slot party is really rather jolly. The colourful design and bouncing soundtrack create a real party atmosphere. The gameplay isn’t especially complicated but the multiplier wilds can really deliver some scorching action, especially if you land a good haul of free spins and the sticky wilds do their stuff.

However, the max win of 5,000 x stake per spin is not exactly a figure that makes Hot Fiesta stand out. If the max payouts would be 3 or 4 times higher, this could have been one street party we wouldn’t want to miss.

What is the Hot Fiesta RTP?

The Hot Fiesta return to player rate is 96.56% which is well above average. High variance, big wins can come in the base game and free spins due to the multiplier wilds.

What is the Hot Fiesta max win?

The most you can win from a single spin here is 5,000 x your total stake. The key to winning big is from multiplier wilds which can reach 5x. More than one landing sees the multiplier values added together.

Are there any Hot Fiesta free spins?

Yes, the Free Spins feature sees you go on to play between 9 and 27 free spins. These come with sticky roaming multiplier wilds which shift to a new position on each free spin.

How does the Ante Bet feature work?

If you activate the Ante Bet feature, you double your chances of landing the free spins as more fireworks bonus symbols are added to the reels. It will cost you 35 coins per line as opposed to 25.