The Gems Bonanza slot is a super volatile jewel-themed game from Pragmatic Play. The action takes place on an 8x8 reel grid with winning combinations formed by landing clusters of 5 or more matching symbols. Special coloured markings can appear behind symbols which can in turn deliver an assortment of modifiers. These include transforming wilds, 2x2 symbol blocks, a whole grid clearance, colossal symbols or up to 15 added wilds. Collect winning symbols in a meter. Reach the threshold and you’ll trigger the Gold Fever Progressive feature where all the colour modifiers play out in turn. Look out too for multipliers which can get payouts racing. Find out more in our Gems Bonanza review.

Where to Play Gems Bonanza Slot

Stakes in Gems Bonanza range from between 20p and £100 per spin. Use the + and – buttons in the bottom right-hand corner of the screen to adjust. You can run between 10 and 1,000 autospins if required. There are also options for quick and turbo spin mode if you want to ramp up the pace.

The Gems Bonanza RTP is a solid 96.51% which is slightly above average. This is a high variance slot. Gems Bonanza is volatile. It can deliver some big potential rewards though, with maximum payouts of 10,000 x stake. 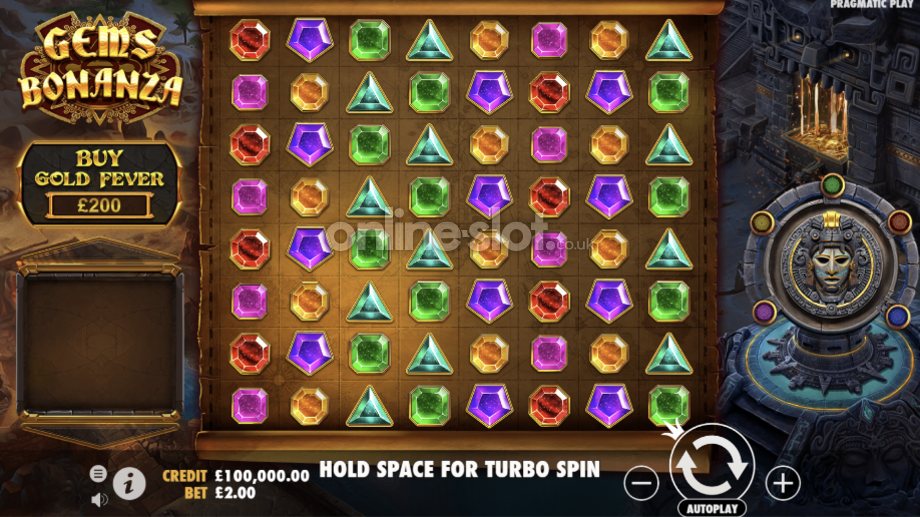 As you’d expect given its name, shimmering jewels dominate the reels in Gems Bonanza. With a mysterious pyramid building in the background, there’s a statue that fires off the modifiers when they strike. The bright visuals here are sharp and clear. That’s important in a slot that has so many moving parts. There’s a panpipe-heavy backing track playing in the background.

On the reels are 7 brightly coloured gems. The most rewarding symbol  is the red jewel. This pays 1,000 x stake if you land a cluster of 25 or more matching symbols. There’s also a wild. This replaces all symbols when it appears in the Wild Gem and Lucky Wild modifiers.

You can play Gems Bonanza on all devices. Despite the 8×8 game grid being much larger than a standard slot, the crystal-clear imagery is very easy on the eye. The Gems Bonanza mobile slot works very nicely indeed.

In the Gems Bonanza slot, the gameplay is a little unusual. There’s the grid setup and tumbling reels for starters. Coloured markers can in turn can bring a host of modifiers into play. Then there’s the Gold Fever Feature where the modifiers play out in turn. Work through the levels there to activate multipliers. We’ll start with the game grid.

In the Gems Bonanza slot, the gameplay is a little unusual. There’s the grid setup and tumbling reels for starters. Coloured markers can in turn can bring a host of modifiers into play. Then there’s the Gold Fever Feature where the modifiers play out in turn. Work through the levels there to activate multipliers. We’ll start with the game grid.

On any base game spin, you could see a coloured marking appear behind a symbol. If that symbol becomes part of a winning combination, the coloured marking triggers a modifier. If that creates a winner, a standard tumble then follows. Again, these continue until there’s no new winner. The markings deliver the following extras. It’s possible to land multiple modifiers on the same spin. The modifiers/features play out in sequence. 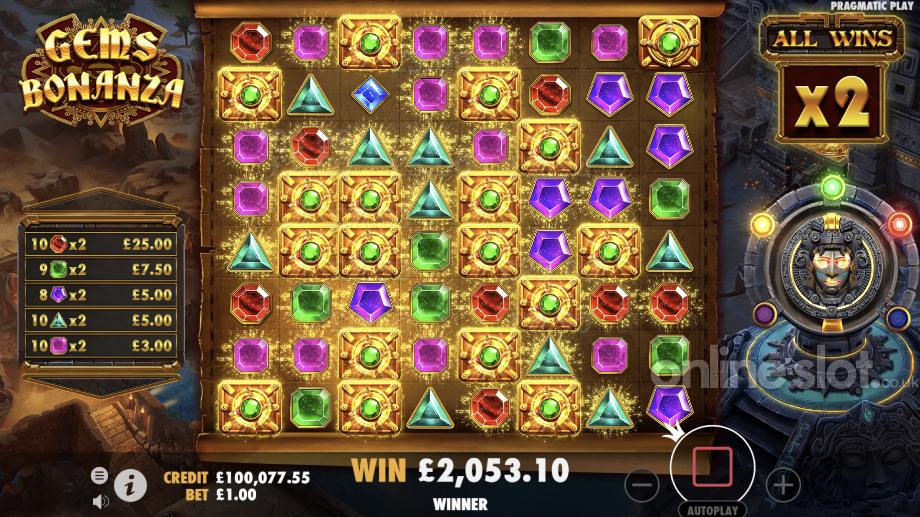 You’ll then get a ‘spin’ where all the modifiers play out in succession. Boosting your chances here is a 2x multiplier. Once again, winning symbols are collected in a meter. Collect enough symbols to fill the meter and you’ll advance to the next level where even bigger multipliers are in play:

The meter reverts to zero at the start of a new spin. Finally, in some territories, you’ll have the option to buy the Gold Fever Progressive feature for a fee of 100 x your total stake. The Collect numbers are slightly different to standard play but otherwise, the feature is the same.

I was very impressed by what I found in the Gems Bonanza slot. The sound and visuals are terrific, creating loads of atmosphere. The modifiers keep the cluster pays game engine motoring along too.

The action here can really rev up during the Gold Fever Progressive feature, especially if you collect enough symbols to advance through the levels and bring the larger multipliers into play. Be warned though, this is an extremely volatile slot.

The best of the Spin features is the Lucky Wilds feature as landing up to 15 wilds can easily give you 114 or more winning symbols which will bring other levels and their subsequent multipliers into action. The hope is that you get a big multiplier with all the Spin features playing out in sequence.

If you like slots that deliver classy designed, innovative extras and volcanic variance, Gems Bonanza should appeal. Like grid/cluster pays slots? Reactoonz 2 by Play ‘n GO and Jammin’ Jars by Push Gaming are worth investigating.

What is the Gems Bonanza RTP?

The Gems Bonanza return to player rate is a solid 96.51% which is slightly above average. It is highly volatile though so expect small wins most of the time.

What is the Gems Bonanza max win?

Gems Bonanza can pack a big payout punch too with awards of up to 10,000 x your total stake per spin possible. To win big, you need to bring multipliers up to 10x into play from the Gold Fever Progressive feature.

How does the Gold Fever Progressive feature work?

Trigger the Gold Fever Progressive feature by collecting winning symbols. You’ll then get a turn where all 5 spin features play out in succession. Collect enough winning symbols and you’ll advance to the next levels where multipliers of up to 10x can really get things moving.

How do the Spin features work?

Coloured markings behind symbols trigger the 5 Spin features. Each different, you can land multiplier features on the same spin. They include symbol removals, wild transformations, 2×2 symbol blocks, colossal symbol blocks up to 5×5 and up to 15 wilds.