Take a super volatile journey to ancient Greece in the Gates of Olympus slot. This 6 reel, tumbling reels game has been created by Pragmatic Play and comes with plenty of extras. On any spin, Zeus can fling a winged orb onto the reels which delivers a multiplier boost of between 2x and 500x. Land more than 1 of these on the same spin and their multiplier values are combined. Trigger the Free Spins feature and you’ll play free spins complete with an expanding multiplier which rises throughout the feature. Up your stakes to activate ante mode and you’ll double your chances of landing the free spins. Discover more in our detailed Gates of Olympus review.

Where to Play Gates of Olympus Slot

The Gates of Olympus slot is played on a 6 reel, 5 row machine and uses an All Ways engine. To create a winning combination, you need to land 8 or more matching symbols anywhere on the reels. They don’t need to be in payline, on adjacent reels or in a touching cluster. Anywhere will do (this is the All Ways part).

Stakes here range from 20p to £125 per spin. Click on the Autoplay button below the spin button and you can set up to 1,000 autospins if required.

The Gates of Olympus RTP is 96.5% which is better than average. This trip to the land of the ancients is a fiery one. The volatility is extremely high. On a scale of 1 to 5, the variance hits the maximum 5. The most you can win from single spin here is 5,000 x your total stake. 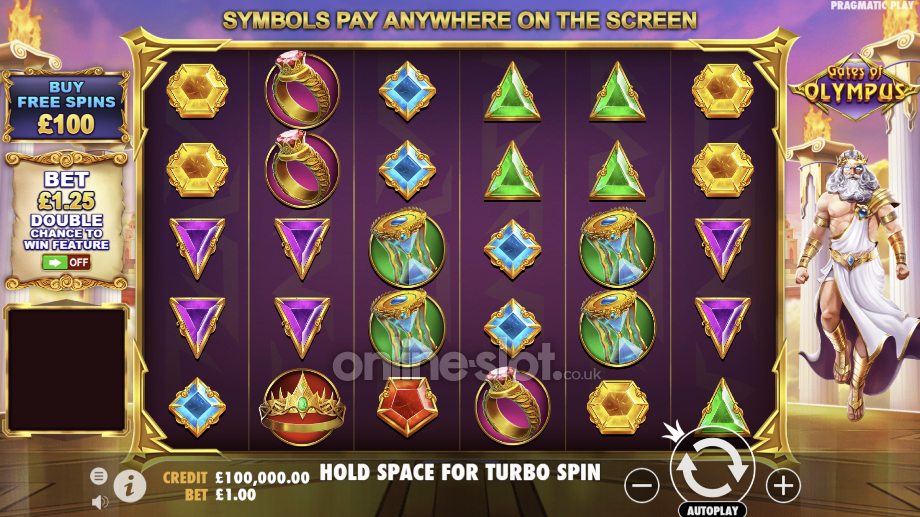 The design in the Gates of Olympus slot crackles with energy. With an ancient Greek mythology theme, it’s based on the sky and thunder god in ancient Greek religion who was the king of the gods of Mount Olympus. Marble and gold dominate the imagery.

On the reels, you’ll find 5 lower value gemstone symbols alongside a goblet, ring and sand timer. The gold crown is the most rewarding standard symbol. Land 12 or more of them on the same spin and you’ll win an award of 50 x your stake. Multipliers can boost winning payouts too.

Weirdly, there is no wild symbol. Zeus, sporting a mighty white beard, is the game’s scatter symbol. Landing 4 or more of him on the same spin triggers the Free Spins feature (more on this below).

You can play Gates of Olympus on tablets and smartphones as well as desktop and laptop computers. The impressive design is perfectly fine if you’re playing on a smaller screen device. You’ll find the same high-octane gameplay in all versions.

There’s plenty going on in this myth and legend-themed slot, starting with the tumbling reels which become active following every winning spin. Look out too for magical orbs which deliver multipliers as well as a free spins feature.

Each time you land a winning combination, the Tumble feature will come into play. The winning symbols are blasted off the reels and new symbols drop down and replace them. A new payout calculation follows. If this creates a new winner, the process is repeated. The tumbles keep on coming until you land one where no new winning combo is created.

To the right of the reels you’ll see an animated Zeus. He can stir into life at random on any spin and activate the Multiplier feature. Zeus will then unleash a winged orb onto the reels. These orbs come with multipliers of between 2x and 500x attached.

Land more than 1 winged orb on the same spin and their values are added together. For example, 6x and 4x orbs would deliver a 10x multiplier boost to your payout from that tumble. These multipliers can trigger in both the base game and the free spins. 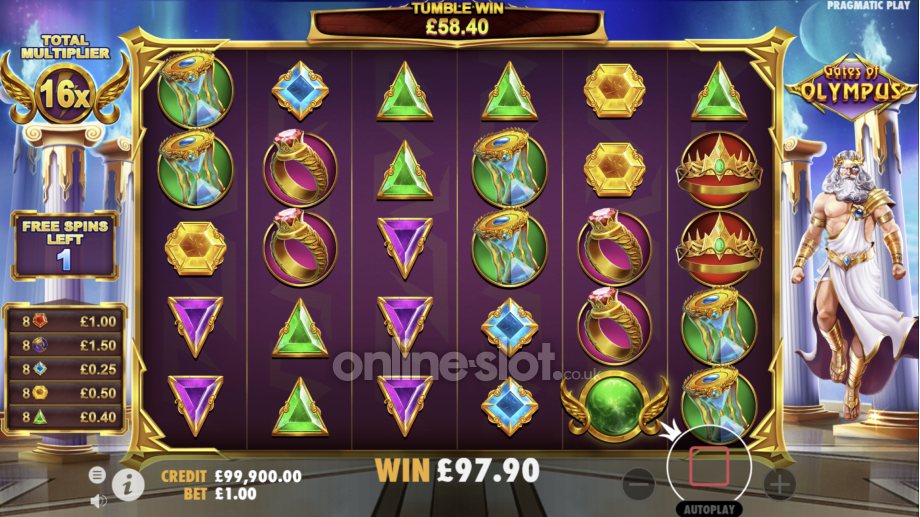 Land 4, 5 or 6 Zeus scatter symbols on the same spin and you’ll pocket an award of 3, 5 or 100 x your total stake. You’ll also bring the Free Spins feature into play and with it 15 free spins.

Whenever a multiplier or lands, its value is added to any existing multipliers you’ve accumulated. This means that the multiplier can rise throughout the free spins.

Unlimited retriggers are possible too. Landing 3 scatters on the same spin will add another 5 free spins to your total. The expanding multipliers can really come into their own if you hit a retrigger or 2. Finally, There is also an option to buy the free spins round in certain territories. This costs 100 x your total stake.

In you wish, you’ll have the opportunity to activate the Ante Bet feature. This will cost you an extra 25 coins per spin. For example, a standard £1 spin rises to £1.25. In return, extra scatter symbols are added to the reels which double your chances of landing the Free Spins feature.

This trip to Mount Olympus isn’t for the faint hearted. The Gates of Olympus slot is an extremely volatile game. It’s a playable one though. The design is terrific and the combination of tumbling reels, multipliers of between 2x and 500x and a free spins feature offer some exciting potential.

However, it bears many similarities to the Sweet Bonanza slot (also by Pragmatic Play). The multipliers are higher in Gates of Olympus but the max win of 5,000 x stake is significantly lower than the 21,175 x stake in Sweet Bonanza. What I did like is that the multiplier increases in the free spins (which it doesn’t in Sweet Bonanza).

This game feels like a case of what could have been. The bonus features and tweaks compared to Sweet Bonanza have been improved, the RTP is higher (slightly) and the theme is more appealing (personally). The only thing missing is the max win potential.

Overall, and if you enjoy slots with a Greek mythology theme, Gates of Olympus should appeal. Other options include Age of the Gods by Playtech which comes with 4 free spins features and 4 progressive jackpots.

What is the Gates of Olympus RTP?

The Gates of Olympus return to player rate is 96.5% which is better than most games. However, the action here can be extremely fiery. We’re in proper 10 out of 10 territory.

What is the Gates of Olympus max win?

You can win up to 5,000 x your total stake per spin. The key to big wins are from the multipliers which apply in both the base game and free spins.

Are there any Gates of Olympus free spins?

Yes, the Free Spins feature starts with 15 free spins but you can win more, infinitely. Multipliers are added together for an unlimited multiplier.

How does the Multiplier feature work?

Zeus can randomly activate the Multiplier feature and add winged orbs to the reels. The orbs have multipliers up to 500x. More than 1 will see the values combined for even bigger wins.