Enjoy a classic fruit machine with a tinge of green in the Emerald King slot, a 5 reel, 20 payline game from Pragmatic Play. This Irish fortune-themed slot could have come straight out of an old school arcade any time over the past 40 years.  It might look rather retro but the gameplay here has plenty of bite. Look out for 2x2 and 3x3 blocks which are the equivalent of 4 or 9 symbols. Also in play are expanding multipliers which increase following a winless spin. The main bonus is the Mini Slots feature. This adds up to 15 mini machines that keep on spinning as long as new winner hits. With 20,000 x stake wins and an RTP of 96.51%, find out more about this high variance slot in our Emerald King review.

Where to Play Emerald King Slot

The Emerald King slot has a 5 reel, 3 row set up that offers 20 paylines. Land 3 or more matching symbols on a payline from left to right, starting from reel 1 and you’ll create a winning combination.

Stake levels here range from between 10p and £100 per spin. You can run up to 1,000 autospins if you wish. There are also options for quick and turbo mode if you really want to ramp up the pace.

The Emerald King RTP is 96.51% which is above average. The theme here might rather jolly but take care. The volatility is very high. This is a super high variance slot. The King couldn’t quickly ravage your bankroll. The Mini Reels and the multiplier can deliver some regal payouts though. The maximum win is a massive 20,000 x stake. 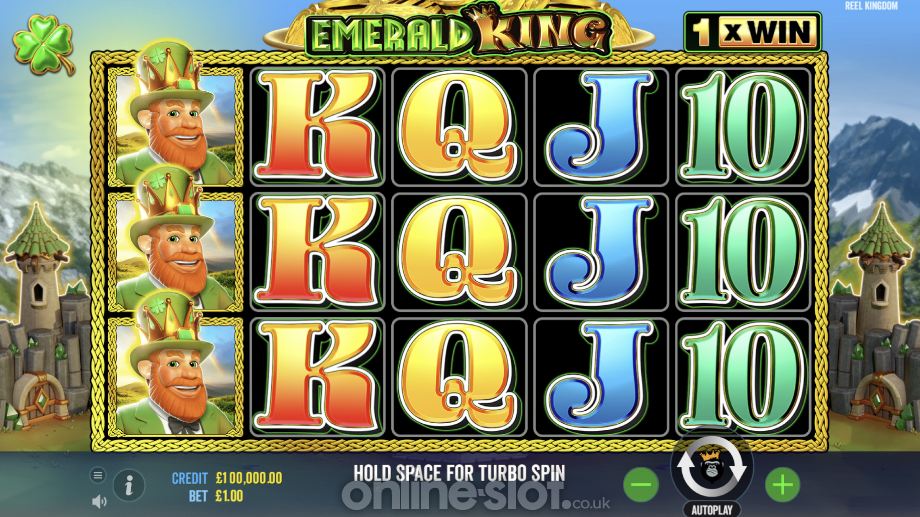 The Emerald King slot blends elements from old school fruit machines with the Irish fortune theme. The visuals are rather retro. The reels are backed by the Emerald King’s cartoon castle.

The rather blocky visuals have a real old school feel. They won’t be troubling any award panels but they work just fine with this rather basic theme. Likewise, the jolly jig backing track and the harp sound effects. There are options to play with either, both or neither active depending on how intrusive you find them.

The black reels could come straight from a classic one-armed bandit. There you’ll find cherries, grapes and 10 to K royals. The bearded Emerald King is the most rewarding symbol. He pays 2.5, 5 or 25 x your total stake if you land 3, 4 or 5 on a payline.  Any symbol can appear as a 2×2 or 3×3 colossal symbol. These blocks are the equivalent of 4 or 9 standard symbols.

The best symbol is the pot of gold wild. This replaces all the standard symbols and also offers awards of 50, 100 or 500 x your stake if you hit 3, 4 or 5 in combination.

You can play Emerald King on all devices including desktop, tablet and mobile. The bold, blocky visuals are fine on a smaller screen. A large allocation of Mini Reels can feel a little cluttered though.

Emerald King has the look and sound of an old school fruity and the same is true of the gameplay. With 2 bonus features, highlights include expanding multipliers and the Mini Slots feature which awards free spins on a set of single payline machines.

Your winning chances can get a big leg up courtesy of the Win Multiplier feature. If you don’t create a winning combination, a multiplier increases by 1. This keeps on rising with each unsuccessful spin until you land a winner when it reverts to 1x. You can keep track of how big the multiplier is via the meter in the top right-hand corner of the screen. 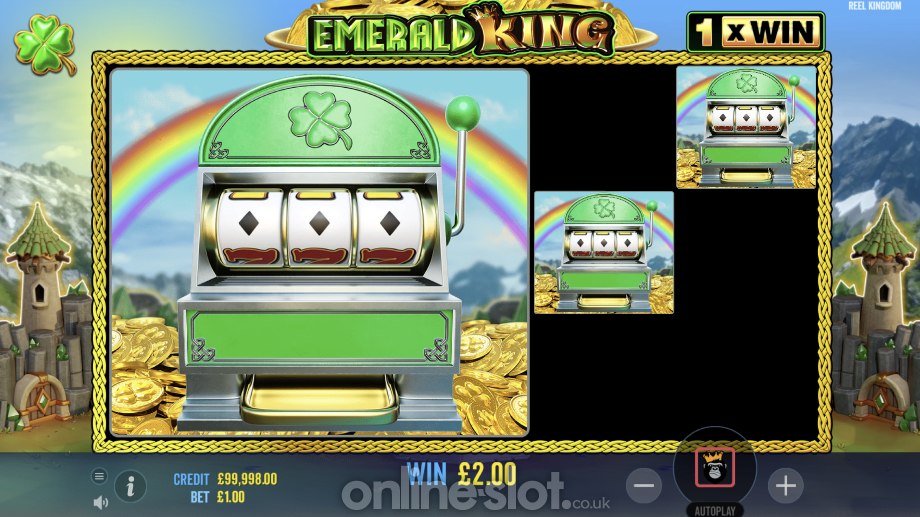 On any spin, you could see a reel turn green. If all 5 reels turn green on the same spin, you’ll trigger the game’s bonus round, the Mini Slot feature. Here, you’ll be awarded a payout equal to double your total stake.

You’ll then be awarded spins on up to 15 new sets of mini reels which each have 1 payline. This number is decided randomly. These Mini Reels are each made up blue, yellow and red 7 symbols as well as blanks:

Each set of reels keeps on spinning until there’s a spin that contains a blank and therefore no winning combination. That reel is then removed from the screen.

You could see 2×2 or 3×3 machines here as well as the standard symbol mini reels. With the colossal reels, any wins achieved are boosted by a random multiplier which is displayed in the top right-hand corner of the Mini Reels.

With its simple design and Mini Slots feature, the Emerald King slot reminded us of the Reel King slots from Novomatic. The chunky design and unusual features won’t be for everyone. The extremely high volatility might not suit everyone either.

If you like old school slots that can pack a knockout punch, an audience with the Emerald King should appeal. Want more Irish action? Barcrest’s Rainbow Riches Cluster Magic slot offers something a little different, as well as big potential payouts.

What is the Emerald King RTP?

The Emerald King return to player rate is 96.51% which is a pretty good figure, especially for a slot with such rampantly high volatility.

What is the Emerald King max win?

The maximum win stands at an impressive 20,000 x your total stake. However, spinning with his majesty is a high variance affair. The bigger wins will come in the Mini Slots feature as it offers random multipliers.

Is there an Emerald King free spins round?

It’s not a standard free spins feature but the Mini Slots feature offers the equivalent. Once triggered, you’ll play on up to 15 single payline machines which are filled with lucky 7 symbols. These keep on spinning as long as you land a new winner. If you trigger a colossal Mini Reel, you’ll also get a multiplier boost.

Can you play Emerald King on a mobile device?

Yes, developer Pragmatic Play has created fully optimised versions of this Irish-themed slot for all devices including desktop, tablet and mobile. It works well enough on the smaller screen mobile handsets.