Torrents of wilds can unleash eruptions of coins in the Wild Lava slot, an explosive new volcanic themed slot from Playtech. Played on a 5x5 grid that offers 40 paylines, each scatter that lands is collected in a meter. On randomly triggered respins, the collected scatters are added to the reels as wilds. In the Lava Free Games feature, all the collected wilds are added to the reels on each free spin which can lead to some spectacular action. With a 96.47% RTP and max wins of 10,000 x stake, find out all you’ll need to new about this fiery slot in our detailed Wild Lava review.

Where to Play Wild Lava Slot

The Wild Lava slot is played on a 5×5 grid that offers 40 paylines. To form a winner, land 3 or more of the same symbol (or wild) on 1 of those 40 paylines, starting from the leftmost reel and you’ll create a winning combination.

There’s something for everyone, from microstakes players to high rollers, when it comes to bet sizing. You can play from between 10p and £500 per spin. Use the + and – buttons next to the Total Bet tab and adjust accordingly. Click on autoplay and you can run between 5 and 100 autospins or leave them running until you trigger the Lava Free Games (more on this feature shortly). Turbo mode is available too.

The Wild Lava RTP is 96.47% which is slightly above average. Low to medium variance, the bigger wins will come in the free spins. The max win is 403 x stake per spin. 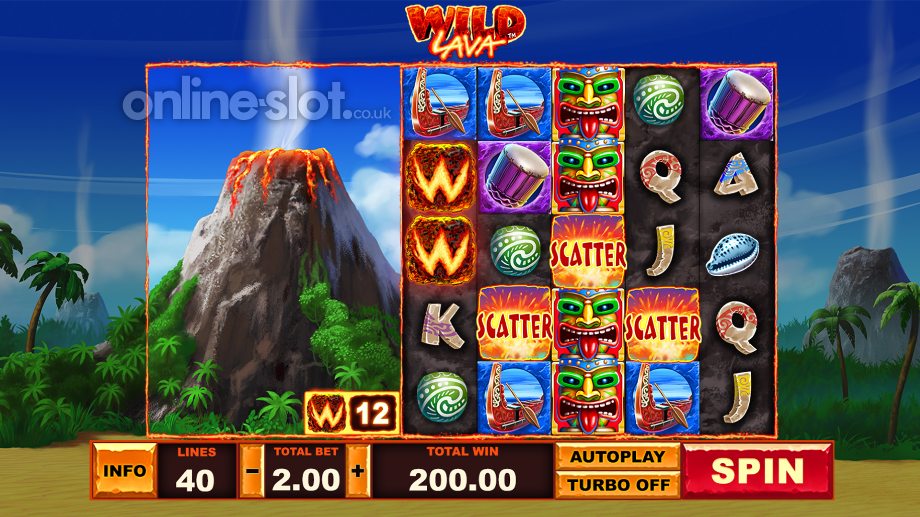 A volcanic Polynesian island is the setting for the Wild Lava slot game. To the right of the screen is the main game grid. To the left is a volcano which spurts into life when you activate a feature.

The visuals here are bright, colourful and very nicely done. There’s a slightly menacing sounding backing track playing while you spin. It all comes together well. It’s simple, yes but fits this theme perfectly.

On the reels, you’ll find lower value A to J royals as well as a shell, a decorated stone, a drum and a canoe. The colourful totem mask is the most rewarding standard symbol. It pays 0.5, 1 or 2 x stake if you land 3, 4 or 5 on a payline.

There is a W wild symbol which substitutes for all symbols except the scatter. Like the totem mask, it pays 0.5, 1 or 2 x your total stake for 3, 4 or 5 in combination. It can land on all 5 reels.

The flaming scatter symbols can appear on reels 2, 3 and 4 only. Each time one lands, it’s collected in the meter to the left of the reels. The scatters then turn into wilds which can become active when you trigger 1 of the game’s 2 features.

You can try and unleash a torrent of coins on all devices including computers, tablets and mobiles. The colourful design is simple but super sharp and it’s easy to view everything even if you’re using a small-screen device. The simple gameplay is also suited to smartphone play. The Wild Lava mobile slot works well.

At first glance, Wild Lava looks quite unusual. The game engine is split into 2 for starters. It’s really not that complex though. All you really need to know is that wilds are collected and can erupt onto the main reels during re-spins and the free spins feature.

The mighty volcano to the left of the reels can explode into life at random on any spin and trigger the Wild Eruptions Respin feature. When it does, a respin is awarded. All the scatters collected in the meter are added to the reels as wilds. A payout calculation follows with all the extra wilds in position. 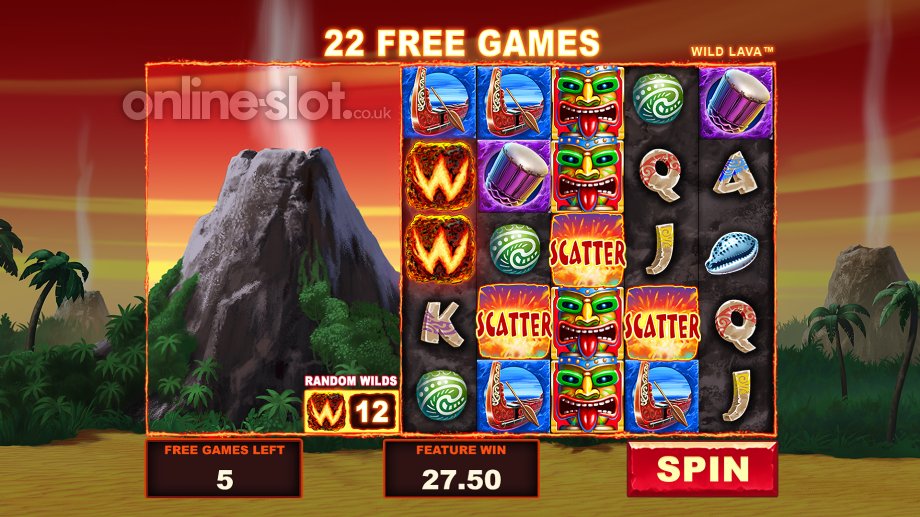 The Lava Free Games feature is triggered by landing 3 scatters on the same spin. You’ll then receive 5 free spins. All the collected scatters turn into wilds and are added to the reels. These wilds are in play throughout the feature, shifting to new positions on the game grid with each free spin.

You’re guaranteed to have at least 5 wilds in play on each free spin. For example, if you have 6 scatters in the meter to the side of the reels, 6 wilds are added to random positions for your first free spin. On each subsequent free spin, those 6 wilds will shift around the reels to a new set of positions.

Retriggers are possible too. Land scatters on reels 2, 3 and 4 adds 5 free spins to your total, with no limits. The extra wilds will be active during any re-triggered free spins too.

We enjoyed this Pacific quest. The action comes thick and fast courtesy of the respins. It’s the Lava Free Games feature where the bigger wins arise though. If you manage to collect a large number of wilds in the meter, they can really come into their own during the free spins.

The only disappointing aspect is that the max win is just 403 x your total stake per spin or free spin. Whilst it’s visually very good, there are better games than the Wild Lava slot. I would rather opt for the Jackpot Giant slot from Playtech which has a progressive jackpot that averages £4.5 million.

What is the Wild Lava RTP?

The Wild Lava return to player rate is 96.47% which is slightly above average and better than what you’ll find in many slots. The variance is low to medium meaning frequent wins.

What is the Wild Lava max win?

The most you can win when play Wild Lava is 403 x your total stake. Your chances increase in the free spins as at least 5 wilds are added on every free spin.

Are there any Wild Lava free spins?

Yes, there’s the Lava Free Games feature. Beginning with 5 free spins, any collected scatters are added to the reels as wilds for the duration of the feature. These wilds shift to new positions on the grid with each free spin.

Is there a Wild Lava mobile slot?

You can try and unleash a mighty eruption of coins on a variety of devices including computers, tablets and smartphones. The bold visuals and simple gameplay make the Wild Lava mobile slot very straightforward to play.