Supernatural spirit creatures which can take the form of a person or animal are the stars of the Jinns Moon: Fire Blaze Jackpots slot. Created by Playtech, this 5 reel, 50 payline title transports players back hundreds of years to pre-Islamic Arabia.  In our Jinns Moon: Fire Blaze Jackpots review, you’ll find out about mystery wilds and a free spins round. The highlight is the Fire Blaze jackpot round. Once triggered, you’ll play a round of streak respins which can award plenty of cash prizes as well as jackpots of up to 2,000 x your total stake. Let’s see if the magical Jinns are in a playful mood.

The Jinns Moon: Fire Blaze Jackpots slot comes with 5 reels, 3 rows and 50 paylines. All winning combinations are creating by landing matching symbols in any position on successive reels, starting from reel 1. The only exception is the scatter.

You can play from between 25p and £500 per spin. Use the + and – buttons to amend your stakes. Autoplay is possible here too. You can get up to 100 spins running. Alternatively, leave them running indefinitely or stop them when you trigger a feature.

The return to player rate is 96.58%. That a pretty good number and is slightly better than average. Medium to high variance, the max win is 2,000 x stake which comes from the Major Jackpot. 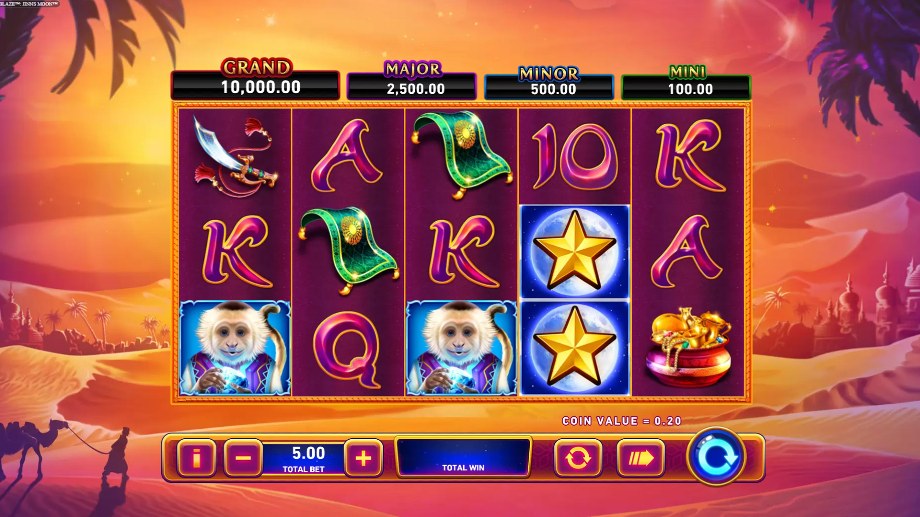 Sand dunes, palm trees and minarets give plenty of Arabian atmosphere to the Jinns Moon: Fire Blaze Jackpots slot. The design here is luxurious and rather good. It’s based on supernatural creatures from early pre-Islamic Arabian mythology.

Enhancing the visuals is a haunting Arabian-style soundtrack. Those rather soothing tones are interrupted by Playtech’s usual crashes and bangs that herald a winning spin. This combination doesn’t fit together too well. You might be reaching for the volume button like we were.

The regal purple reels are made up of lower value A to 10 royals and symbols relating to the Arabian theme. They include a sword, a magic carpet and a pot dripping with gold and jewels. The Jinn, who appears in the form of a magical monkey is the most lucrative standard symbol, paying 0.2, 1 or 3 x your total stake if you land 3, 4 or 5 in combination.

Boosting your chances of creating a winning combination is the mystery Arabian woman who is the wild. She can land on reels 2, 3, 4 and 5 only and substitute for everything bar the moon and the free spins scatter symbol. A combination of 5 wilds in a payline awards a payout of 3 x your stake.

High class design is a must for a playable online slot and thankfully, Jinns Moon: Fire Blaze Jackpots fits that bill. The visuals here are excellent, even on the smell screen. The relatively straightforward features are well suited to mobile play too. No complaints here.

There’s a historical theme to the Jinns Moon: Fire Blaze Jackpots but there’s plenty of modernity about the features. You’ll find a very decent selection of extras including wilds, free spins and, top of the bill, the Fire Blaze bonus.

The magic lamp is the scatter. Land 3, 4 or 5 of the magic lamp anywhere on the reels on the same pain and you’ll pocket an award of 1, 10 or 50 x your total stake. You’ll also trigger the Free Games feature and with it, 8 free spins.

The gameplay can be a little different in the free spins round. Symbol positions can appear empty. When this happens, positions are all filled with a randomly chosen symbol. Re-triggers are possible too. Hitting 3 or more scatters adds another 8 free spins to your total. 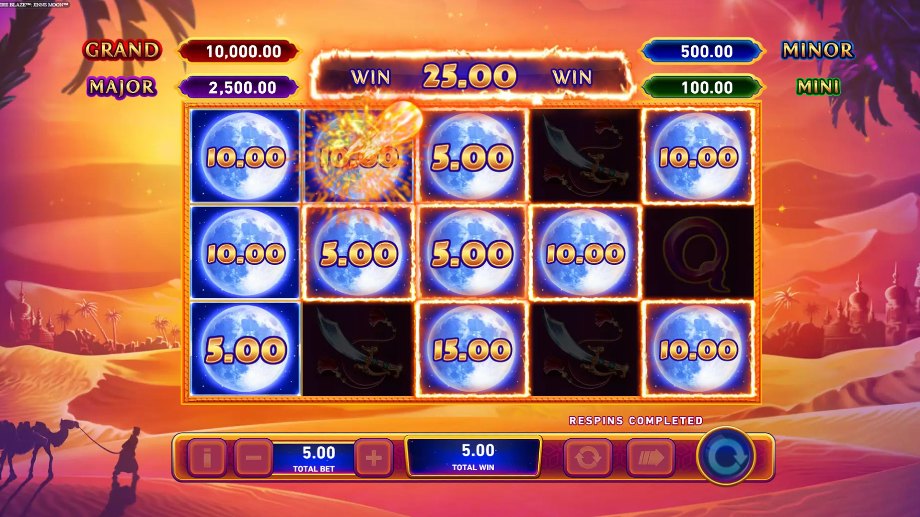 The main attraction in Jinns Moon: Fire Blaze Jackpots is the Fire Blaze Respin feature. Land 6 or more of the moon symbol on the same spin to activate it. The moons from the triggering spin lock in position and 3 respins follow where the reels are made up of blanks, moons or jackpot star symbols.

Land a moon and it locks in position and the respins reset to 3. The round continues until you’ve used up your allocation of respins or you’ve managed to fill the whole of the reel grid with moons.

Each moon comes with a cash amount attached. These values are worth 1, 2, 3, 4, 5, 10, 15 or 15 x your total stake. Any cash values on the reels are combined at the culmination of your respins to give you an overall prize.

If you see a jackpot star symbol it can morph into the Mini, Minor or Major jackpot and award its associated prize of 20, 100 or 500 x your total stake.

The Grand Jackpot is awarded if you manage to fill the whole grid with moons. In this happy circumstance, you’ll win all the moon cash values plus the Grand Jackpot which stands at 2,000 x your total stake.

We’ve taken plenty of virtual trips across the Sahara. The Jinns Moon: Fire Blaze Jackpots slot is one of the better ones, combining high class sound and visuals with some cracking extras.

The Free Games feature is simple enough but the Fire Blaze Respin feature offers some top opportunities. Combine that with the impressive sound and imagery and relatively high RTP and Jinns Moon: Fire Blaze Jackpots is one desert caravan we’re happy to join.

If you like the Arabian theme, NetEnt’s Arabian Nights slot looks quite similar visually but offers the chance to win a life-changing progressive jackpot.

What is the Jinns Moon: Fire Blaze Jackpots RTP?

The Jinns Moon: Fire Blaze Jackpots RTP is 96.58%. That’s pretty good and better than many other slots. On average, for every £100 wagered on Jinns Moon, £96.58 is returned in prizes. This can vary over the short term of course.

What features does Jinns Moon: Fire Blaze Jackpots have?

Jinns Moon: Fire Blaze Jackpots comes with 2 classic bonus features. There’s a Free Games feature which awards up to 16 free spins once triggered. Potentially more interesting is the Fire Blaze Respin feature. This streak respin round offers cash prizes as well as a shot at landing a jackpot prize. Fill the reels with moon symbols and you’ll land the Grand Jackpot of 2,000 x your stake plus any individual prizes.

Is there a Jinns Moon: Fire Blaze Jackpots mobile slot?

Yes, you can play Jinns Moon: Fire Blaze Jackpots on a mobile or tablet as well as on your computer. The small screen versions are just as well designed and the desktop slot and also come with the same combination of free spins and Fire Blaze Respins feature. Check out the best Playtech sites which allow you to play on mobile devices.

What is a Jinn?

For the uninitiated (which included use), here’s how Encyclopedia Britannica describes a Jinn, “in Arabic mythology, a supernatural spirit below the level of angels and devils.” Or in other words, a genie. In Jinns Moon: Fire Blaze Jackpots, they take the shape of a monkey.