Medieval adventure and shimmering jewels are 2 enduringly popular slot themes and they come together in the Gem Splash: Kings Court slot. This Playtech-powered game is played on 5 reels and 30 paylines and comes with Gem Drop bonuses which can award instant win prizes of up to 100 x your stake.  Trigger the Free Games feature and you’ll play 6 free spins complete with colossal Gem Drop symbols which can reach 4x4 in size and make it that much easier to land a bonus. Also up for grabs are 3 progressive jackpot prizes. Find out more in our detailed Gem Splash: Kings Court review.

The Gem Splash: Kings Court slot is played on a 5 reel, 4 row, 30 payline machine. To create a standard winner, land 3 or more matching symbols on a payline from left to right, starting from reel 1. You can also land Gem Splash bonuses which we’ll look at shortly. These come on top of any standard payline wins.

Stake levels start at 10p for the microstakes players and rise to a massive maximum of £500 per spin for the super high rollers. Use the + and – buttons below the reels to adjust. Autoplay allows you to run between 5 and 100 autospins. Alternatively, you can leave them running until you land the free spins feature.

The Gem Splash: Kings Court RTP is 96.37%. This includes the contribution to the jackpot element of the prize pool (which is 3.99%). Medium variance, the max win is unlimited due to the progressive jackpots. 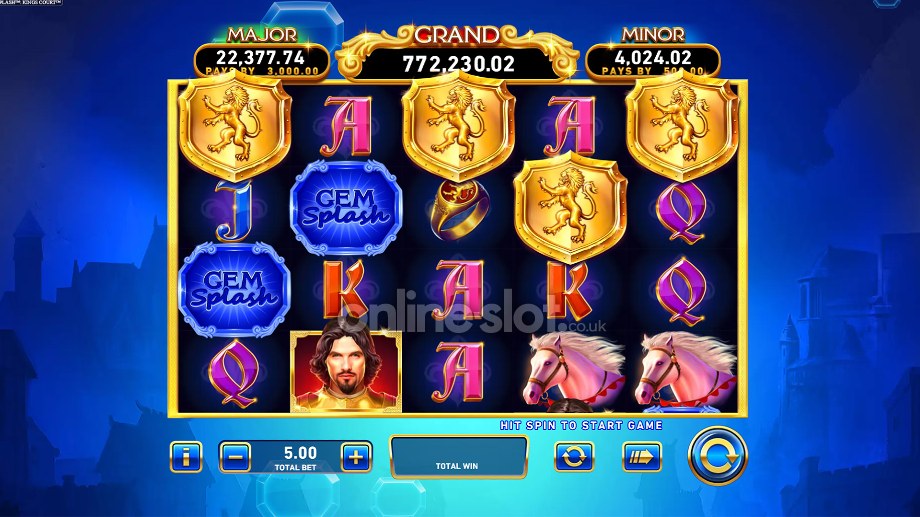 The design in the Gem Splash: Kings Court slot is rather basic. With a medieval theme, Playtech has produced this game with studio RareStone meaning it’s rather simple graphically.  In the background, you’ll see the shadow of a medieval castle.

The unfussy visuals are matched by a rather generic soundtrack. There not much that hints of the middle ages as far as the backing track goes. In fact, it gets a bit jazzy when you land a winning combination. The functional design here does the job but it’s not overloaded with flair.

On the reels are A to J royals which are joined by a ring, crown and white horse. The bearded king is the most rewarding symbol. This pays 0.8, 3 or 6 x your total stake if you land 3, 4 or 5 on a payline. Oddly, there is no wild symbol.

In Gem Splash: Kings Court, Gem Drop and Gem Splash symbols are central to the action. Land one on top of the other and you’ll be in line for an instant cash bonus. There’s also a bonus round that awards free spins, complete with oversized Gem Drop symbol that can get as big as 4×4 in size. There’s also a chance to scoop a jackpot prize.

Gem Drops are special overlay symbols that can appear on top of any symbol or above the reels on any spin. They then drop down the reels 1 row at a time on the spins that follows until they fall off the bottom of the game grid. 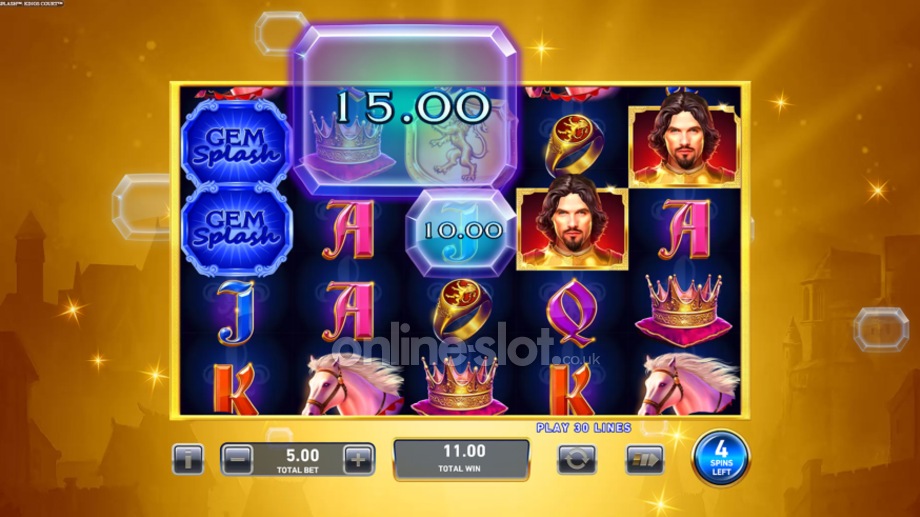 Land 3, 4 or 5 golden shield scatter symbols anywhere on the reels on the same spin and you’ll receive a prize equal to 1, 10 or 50 x your total stake. You’ll also trigger the Free Games feature with 6 free spins.

The prize shown on an oversized Gem Drop are awarded once for every Gem Splash that lands under it. Prizes on each big Gem Drop are worth between 3 and 20 x your stake. Helping your winning chances during the free spins is the fact that the Gem Splash symbols appear in stacked formation on all 5 reels. Landing 3 or more scatter symbols on the same spin will add another 6 free spins to your total, with no limits.

The Gem Splash Jackpot feature can be triggered randomly on any spin. A large gemstone bobs around the screen until it awards one of the following cash or jackpot prizes:

The Minor, Major and Grand Jackpots are progressive jackpots. You can check the amounts in the meters above the reels.

Like the other slots in this series, the Gem Splash: Kings Court slot is relatively straightforward as far as gameplay is concerned. The Gem Drops can deliver some tidy payouts though, especially in the free spins where the colossal 4×4 symbols can quickly have an impact.

It’s not the flashiest looking and sounding game you’ll play and the payouts from each base game spin or the Gem Drops won’t appeal to many. This game is all about the progressive jackpots. The size of them depends on how popular the Gem Splash series is.

The Gem Splash: Marilyn Monroe slot offers the same jackpots but has more on the features front. It also offers big non-jackpot wins of 2,000 x stake per spin. If it’s jewels you want, Da Vinci Diamonds by IGT is a popular land-based and online slot game worth trying.

Yes, you can win 3 progressive jackpots via the Gem Splash Jackpot feature. The Grand Jackpot is the biggest of the 3. These can trigger at random on any spin.

Are there any Gem Splash: Kings Court free spins?

Yes, trigger the Free Games feature and you’ll receive 6 free spins. Gem Drop symbols can appear in 2×2, 3×3 or even 4×4 clusters during the feature. You can also win unlimited extra free spins.

How does the Gem Splash feature work?

Land a Gem Drop jewel symbol on top of a Gem Splash logo symbol and you’ll trigger the Gem Splash feature and win the attached cash prize. The prizes range from 1 to 100 x your total stake. These can be won in the base game and free spins.

What is the Gem Splash: Kings Court RTP?

The Gem Splash: Kings Court return to player rate is 96.37% which good for a jackpot slot. 3.99% of each bet placed goes to fund the 3 progressive jackpots.