Discovering wild jungle riches is the name of the game in the Frog’s Gift slot, a nature-themed game from Playtech. Played using 5 reels and 20 paylines, Frog’s Gift comes with a couple of features. Trigger the free spins round and you’ll have the pick of 2 different free spin and wild multiplier combinations. Choose 8 free spins with 3x or 8x multipliers or 4 free spins with 8x or 18x multipliers live throughout. The Frog’s Gift feature is a respin round where you can win cash prizes or uncover 1 of 4 potential jackpot prizes. Find out what these wild animals have in store in our detailed Frog’s Gift review.

Where to Play Frog’s Gift Slot

1) To take part, you must register via the registration code PGCTV1 and opt in. 2) Get SMS-verified by supplying a valid telephone number. 3) Enter the validation code received by SMS to redeem the free spins. 4) Free Spins are valid on any of our Daily Jackpot games. 5) Free Spins will expire in 7 days from receipt of the offer. 6) Average Daily jackpot amount calculated between 01/04/21-12/08/21.* #ad

18+. New customers registering with code CASF51 only. Free spins valued at 10p. After you’ve played your initial free spins, opt in, deposit and play £10 on Daily Jackpot games to get an additional 50 free spins. Reload the game to get your free spins. Deposits made with e-wallets are not valid for this offer. Full T&Cs apply #ad

The Frog’s Gift slot uses a 5 reel, 3 row, 20 payline game engine. Land 3 or more matching symbols or wilds in a payline, starting from reel 1, to form a winning combination.

Stake levels range from between 20p and £500 per spin. You can run between 5 and 100 autospins if required. Alternatively, leave them running until you trigger a feature.

The Frog’s Gift RTP is an impressive 96.76% which is well above average. Medium to high variance, it offers big wins in the free spins. The max win is 9,000 x your total stake per free spin with an 18x wild multiplier. 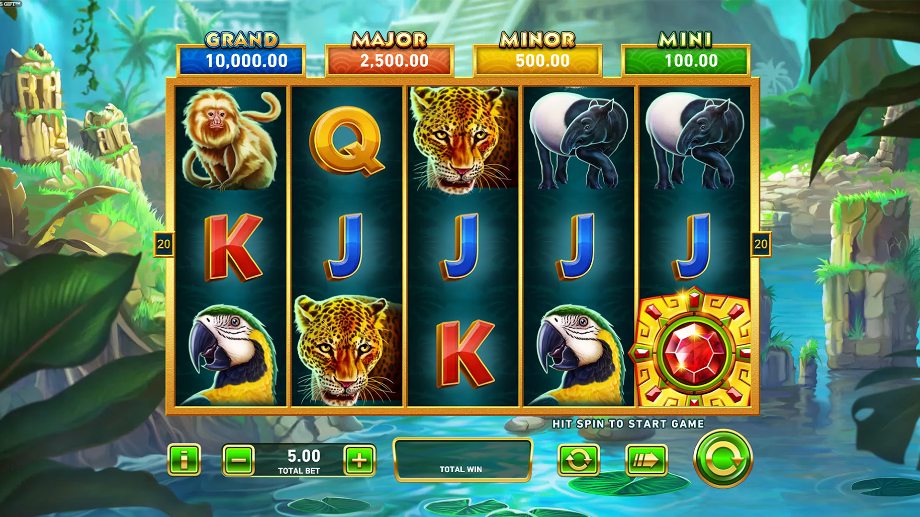 Frog’s Gifts transports players deep into the jungle. With ruined buildings and a river in the background, the visuals here are simply done but they’re bright, colourful and easy to make out. There’s a rather soothing soundtrack playing while you spin which is punctuated by Playtech’s usual bangs and bleeps that herald a winning spin. The design isn’t overly flashy but it does the job.

The reels are made up of A to J symbols as well as an assortment of animals. They include a butterfly, anteater, monkey, parrot and cheetah. The big cat is the top standard symbol, paying 1, 5 or 25 x stake if you land 3, 4 or 5 on a payline.

The gem encrusted jewel is the wild. This can appear on all 5 reels and substitutes for all the standard symbols. It also pays 5, 25 or 50 x stake in its own right.

You can play Frog’s Gift on all devices including computer, tablet and mobile. The Frogs Gift mobile slot works well. The bright comic book design is sharp, even on the smaller screens. The simple features work nicely too.

This colourful jungle adventure comes with a couple of bonus features. There’s a classic free spins round where your winning chances are boosted with big multipliers. The Frog’s Gift feature is an unusual variation on the re-pin round. You’ll also have a shot at landing 1 of 4 potential jackpot prizes here.

The purple flower is the game’s scatter symbol. Land 3, 4 or 5 purple flowers anywhere on the reels grid on the same spin and you’ll pocket an award equal to 1, 15 or 100 x your total stake. You’ll also trigger the Free Games feature.

You’ll then be offered the choice of 2 leaves which have the following free spin and multiplier combinations:

Any winning combination that includes a wild in the free spins is boosted by 1 of 2 multiplier amounts. This is chosen randomly. Land 3 scatters on the same free spin for a re-trigger. If you originally chose 4 free spins, you’ll get another 4. If you went for 8, an extra 8 are added. With both options, there are no limits in terms of free spins. 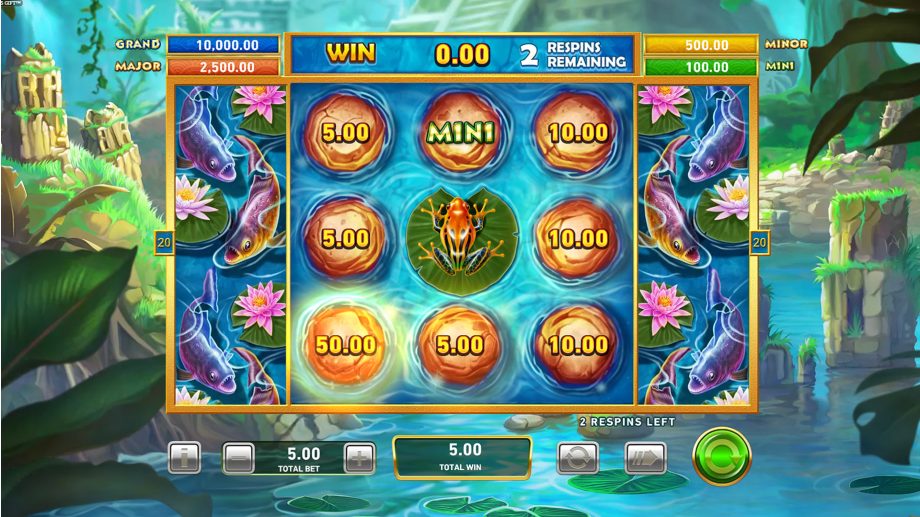 The Frog’s Gift feature is activated by the piranha symbol which can appear stacked on reels 1 and 5 only. If the piranha covers 4, 5 or 6 positions, you’ll head to the Frog’s Gift Feature. You’ll start with 2, 3 or 4 respins depending on the number of piranhas.

The action here takes place on a new set of reels. You’ll be shown a pond made up of 8 stones. On each respin, a random position is selected. If a stone is picked, you’ll win the amount attached to the stone which is then removed, leaving a blank.

The number of respins then resets to its original. Each stone is worth between 1 and 50 x your stake. There are also Mini and Minor Jackpot stones. If a blank position is picked, you obviously won’t win anything and the number of respins decreases by 1.

If there are just 2 stones remaining, the frog hops onto 1 of them. When this stone is then randomly picked, a mega reel appears. Depending on where the pointer lands, you’ll win 1 of the following prizes:

The feature ends when you’re out of respins. The value of all the stones is combined for your final award.

The jungle theme is a popular one and this rainforest trek is nicely done. There’s nothing revolutionary here but the Free Games feature, with potentially large wild multipliers, impresses. As does the Frog’s Gift Feature which offers something novel and can deliver some decent action.

The key is to get an 18x wild multiplier as this could lead to 9,000 x stake payouts on each free spin. With the relatively high RTP and the colourful design, the Frog’s Gift slot is a solid all-rounder.  If you want more jungle adventures, the Gonzo’s Quest Megaways slot by NetEnt offers plenty of bonus features and good win potential.

What is the Frog’s Gift RTP?

The Frog’s Gift return to player rate is 96.76%. That puts it well above average and is a rather impressive number. It’s a medium to high variance slot though with the bigger wins coming in the 2 bonus features.

What is the Frog’s Gift max win?

The most you can win from Frog’s Gift is 9,000 x your stake. This will come in the Free Games feature as you can benefit from wild multipliers up to 18x.

Is there a Frog’s Gift free spins feature?

Is Frog’s Gift a jackpot slot?

No. You can win 4 fixed jackpot prizes in Frog’s Gift. They can strike during the Frog’s Gift feature. Land the Grand Jackpot and you’ll be hopping away with a payout of some 2,000 x your total stake.