Head to the planet Alpha Labori whose future survival lies in the hands of a couple of robots in the Sparky & Shortz slot. Created by Play ‘n GO and played using 5 reels and 10 paylines, hope to see stacks of matching symbols as they increase the value of a multiplier for that spin. Sparky can try and activate the Boost Meter where even more multiplies can come into play. Trigger the Free Spins feature and you’ll play up to 100 free spins. Multipliers don’t reset during the bonus round either. Find out more about this volatile sci-fi adventure in our in-depth Sparky & Shortz review.

The Sparky & Shortz is played with 5 reels, 3 rows and 10 paylines. Winning combinations are created in the usual manner for a paylines slot by landing 3, 4 or 5 matching symbols from left to right on a payline, starting from the leftmost reel.

Bet levels here start at a minimum 10p per spin but can reach a maximum of £100 per spin. With 5 available stakes showing below the reels, click on the plus and minus buttons to choose your preferred bet.

The Sparky & Shortz RTP is 96.28%. This is a slightly better than average figure and an improvement on Play ‘n GOs usual default 96.2% return to player rate.

This is a relatively high variance slot. On a scale of 1 to 10, I’d put the Sparky & Shortz volatility at 8. It’s fiery enough but not too over the top. The maximum win is 10,000 x your total stake per spin which the chances of winning this 1 in 100 million. 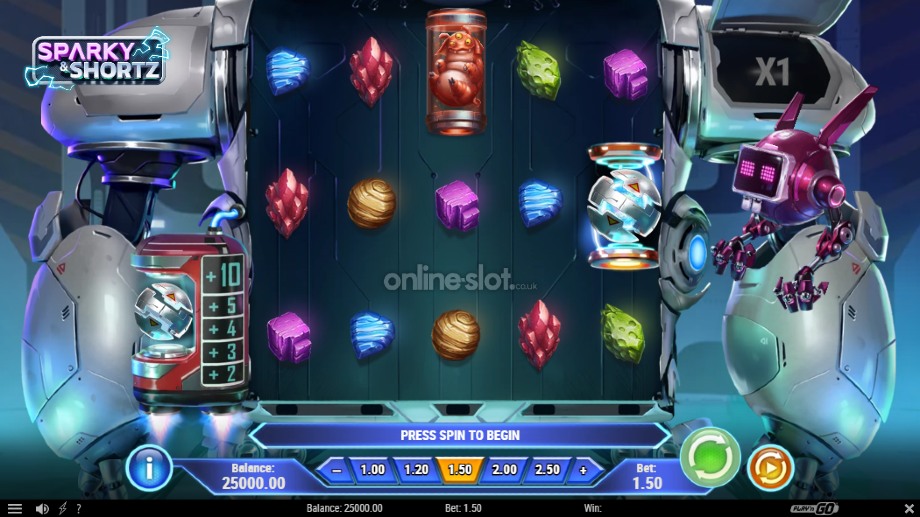 There’s a futuristic, sci-fi feel to the design in the Sparky & Shortz slot. Some of the cartoon imagery reminded us of the classic 1950s alien invasion movies.

The backstory is that Sparky is a useful repair robot who needs to fix his friend Shortz, a multi-functional life-saving robot. If he does this, they have a chance of rescuing the planet (Alpha Labori). The design is bright and bold and just what we’ve come to expect from a Play ‘n GO release.

The reels are made up of 5 lower value symbols made up of brightly coloured space rock. They’re joined by a trio of high value aliens. The best paying alien rewards you with 1, 2.5 or 10 x your total stake if you land 3, 4 or 5 across a payline.

The swirling vortex is the game’s wild symbol. This can land on all 5 reels and substitute for all the standard symbols when it makes up part of a winning combination. It pays 2, 5 or 20 x stake for 3, 4 or 5 in combination.

Symbols can appear in stacked formation which can bring multipliers into play. Look out too for the robots Sparky & Shortz which buzz around the screen. Finally, there’s a Power Cell scatter symbol which can trigger the bonus round. Here’s a table highlighting all symbols on the reels:

Sparky & Shortz has been fully optimised for play on tablets and mobiles as well as desktop and laptop computers. The colourful imagery against the dark backdrop come together nicely on the Sparky & Shortz mobile slot. The relatively simple gameplay is also well suited to play on a handheld device.

The setting in the Sparky & Shortz slot might be futuristic but the action is relatively straightforward. This isn’t a game that’s overloaded with extras. Stacked symbols can bring multipliers into the mix. The main feature is a free spin round where multipliers can increase throughout the feature.

The Win Multiplier features comes into play if you land 3 identical symbols on the same reel. The multiplier is displayed on Shortz’s body and any wins on that spin are boosted by that amount. 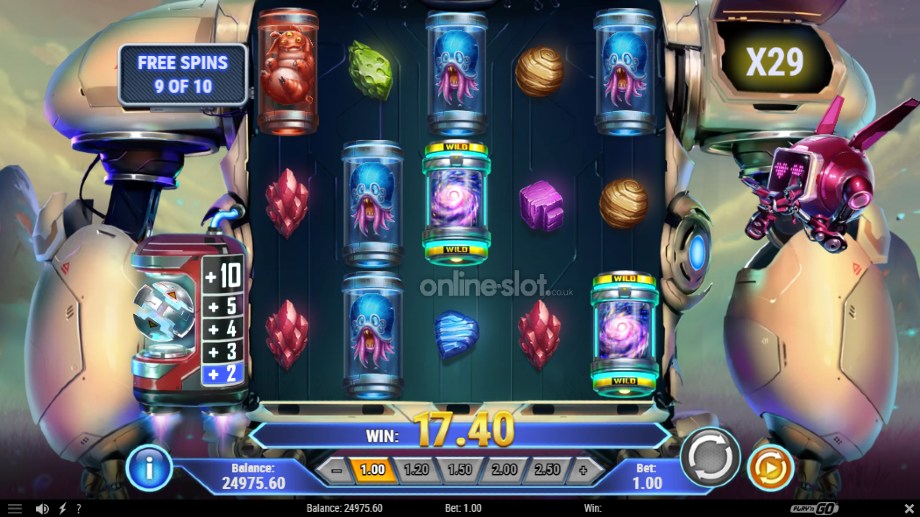 The main extra in Sparky & Shortz is the Free Spins feature. It’s triggered by landing the Power Cell Scatter symbol on reels 1, 3 and 5 on the same spin. You’ll then go on to play 10 free spins.

Retriggers are possible too. Land the Power Cell Scatter on reels 1, 3 and 5 and another 5 free spins are added to your total. It’s possible to retrigger a maximum of 100 free spins in total.

This space adventure is a rather jolly one. The design in the Sparky & Shortz slot is typical Play ‘n GO and impressively done.  The gameplay doesn’t offer a huge amount of variety but the multipliers can get things moving in the base game.

Those multipliers can really come into their own in the Free Spins feature. This is because the multipliers do not with each new spin. If you’re lucky enough to land a retrigger or 2, then the coins and really start to motor.

That said, other Play ‘n GO titles can give you bigger max wins from just 1 spin, like Diamonds of the Realm. If you’re after a sci-fi adventure, Dr Toonz can pay up to 22,000 x stake and has a total of 5 bonus features.

What is Sparky & Shortz RTP?

What is Sparky & Shortz max win?

The maximum win is 10,000 x your total stake. This will come in the Free Spins feature where the multiplier can only increase and reach as high as 10x.

Are there any Sparky & Shortz free spins?

Yes, the Free Spins feature can give you up to 100 free spins in total. With the Win Multiplier in play, the multiplier can only increase meaning a higher chance of a 10x multiplier throughout.

Is there a Sparky & Shortz demo?

Yes, the Sparky & Shortz free play version is available here at Online-Slot.co.uk. You can join this space robots whether you’re playing on a desktop computer, tablet or mobile.