Play master jeweller in the gemstone-themed Prism of Gems slot. This follow up to Frozen Gems has been created by Play ‘n GO and comes with some funky features. The action plays out on a 5 reel, cascading wins machine that offers up to 3,087 ways to win. Look out for the horizontal reel above the main game engine which brings multipliers up to 343x into play.  Other highlights include splitting symbols which increase the potential ways to win as well as a Free Spins feature. Find out more in our full Prism of Gems review.

Where to Play Prism of Gems Slot

The Prism of Gems slot is played with 5 reels and up to 3,087 ways to win. The number of symbols that can appear on reels 1 and 5 is fixed. They can change with each spin on reels 2, 3 and 4 though with each one of them offering up to 7 symbols. The number of ways to win varies with each spin. At their maximum size, you’ll have 3,087 ways to form a winning combination. Winners are formed by landing 3, 4 or 5 matching symbols or wilds on adjacent reels, starting from reel 1.

You can play this jewel-themed slot at stake levels that range from 20p to £100 per spin. Choose from the available stakes below the reels which you can change by clicking on the plus and minus buttons. In some countries, there are Quick Spin and Auto Play options. 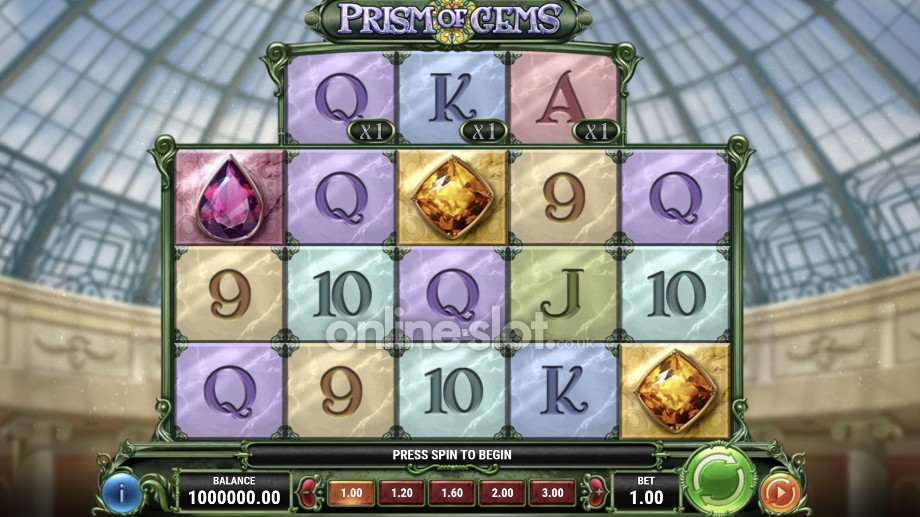 As you’d expect from the Prism of Gems slot, it has a gemstone theme. The sequel to Frozen Gems, colourful jewels take centre stage as far as design is concerned.

You’ll see 10 different gems spinning around the reels. The most lucrative of them will land you a payout of 1, 2, or 3 x your total stake if you manage to land 3, 4 or 5 of them in combination. Play ‘n GO powered slots are usually visual treats and Prism of Gems is just what we’ve come to expect.

Prism of Gems is available to play on all devices including mobiles, tablets and desktops. The set up here is a little unusual but the interface is straightforward and you’ll have no problems playing on a device with a small screen.

The game mechanic in Prism of Gems delivers some unusual gameplay. The special multiplier reel can really get things moving. Look out too for symbols that can split into 2 to increase the win ways as well as a free spins feature.

It’s possible to land more than 1 multiplier in the same winning combination. In fact, if you land the perfect multiplier combination, the payouts rockets courtesy of an enormous 343x multiplier boost (7x7x7=343). Multipliers reset at the start of each new spin.

If a symbol that appears on the horizontal reel lands on the vertical reel below, it splits into 2. Called the Split Symbols feature, this in turn boosts the potential number of ways you can form a winning combination.

Gem Wilds can only land on the horizontal Multiplier Reel. When they do, all the symbols on the reel or reels below split into 2. 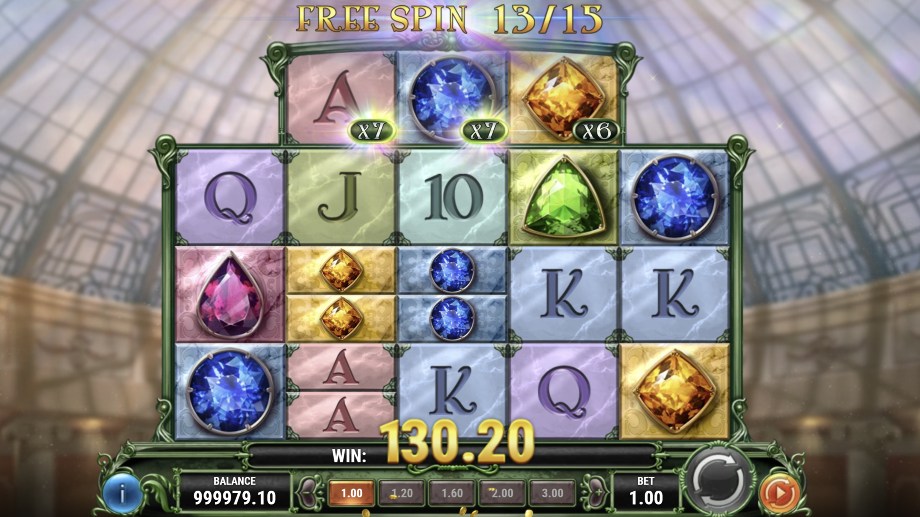 Landing 3, 4 or 5 scatter symbols anywhere on the reels on the same spin trigger the game’s Free Spins feature. Your reward here is 10, 15 or 20 free spins.

Any multipliers active in the horizontal reel on the triggering spins are carried over into the free spins. These multipliers increase throughout the feature and don’t reset at the end of every free spin. This means potential multipliers up to 343x on each free spin.

Finally, each time a scatter symbol lands during the feature another 2 free spins are added to your total. There’s no limit to how many free spins you can play with.

The gameplay in the Prism of Gems slot is a little unusual thanks to the cascading reels, horizontal Multiplier Reel and the split symbols. That unorthodox combination can deliver some very decent action, especially if you manage to carry over some decent-sized multipliers when you trigger the free spins.

It’s all about the Multiplier Reel where multipliers up to 343x can deliver 30,000 x stake payouts per spin. Your chances of winning big increase in the free spins as the multipliers don’t reset after every free spin.

Comparing to Frozen Gems, the RTP is slightly lower (96.24% vs 96.36%) and the max win is a third (10,000 x stake vs 30,000 x stake). On both those important elements, Prism of Gems is superior to Frozen Gems which is good considering a sequel should supersede the original.

If you want more gemstones, Da Vinci Diamonds by IGT is probably the most popular game using them. Another option is Hot Gems Xtreme from Playtech which comes with up to 262,144 ways to win.

What is the Prism of Gems RTP?

The Prism of Gems RTP rate is 96.24%. This is a high variance slot with the volatility coming in at 9 out of 10. The bigger wins will come from the multiplier reel.

What is the Prism of Gems max win?

The potential maximum win is 30,000 x your total stake per spin.  The key to win big is from the multiplier reel which can give you multipliers up to 343x.

What is the Multiplier Reel?

The Multiplier Reel is a horizontal reel that appears above the grid. Multipliers which increase with each cascade win, up to a maximum of 7x. Land a win and the multiplier is applied. These can combine to boost payouts by up to 343x.

Are there any Prism of Gems free spins?

Yes, the Free Spins feature can give you unlimited free spins. Any multipliers from the triggering spin carry over and only increase throughout the feature. This means its easier to get multipliers up to 343x on every free spin.