Head to the frozen North where a mythical mountain creature can deliver masses of action in the Legend of the Ice Dragon slot. Created by Play ‘n GO, it’s a 7 reel, 7 row, cluster pays game where cascades follow each time you land a win. There are plenty of extras on offer, starting with Ice Frame Wilds which can boost payouts with multipliers of up to 8x. There are 3 special modifiers that can trigger at random on any winless spin. Winning symbols are collected in a meter. Collect enough and you’ll trigger 1 of 4 Ice Crystal features. With 6,000 x stake max wins, find out more about this feature-filled slot in our detailed Legend of the Ice Dragon review.

Legend of the Ice Dragon Demo

The action in the Legend of the Ice Dragon slot plays out on a 7×7 game grid. To create a winning combination, land a cluster of 5 or more matching symbols or wilds.

You can play this frozen fantasy at bet levels of between 20p and £100 per spin. With 5 available stakes appearing below the reels, click on the plus and minus buttons to adjust accordingly. In some countries, there are Autoplay and Quick Spin functions.

The Legend of the Ice Dragon RTP is 96.29% which is slightly better than average. The theme might be icy but the variance here is much hotter. On a scale of 1 to 10, I’d put the volatility at around an 8.

The maximum potential win here is 6,000 x your total stake from a single spin. The probability of maximum exposure (the max win) is 1 in 5 billion spins. 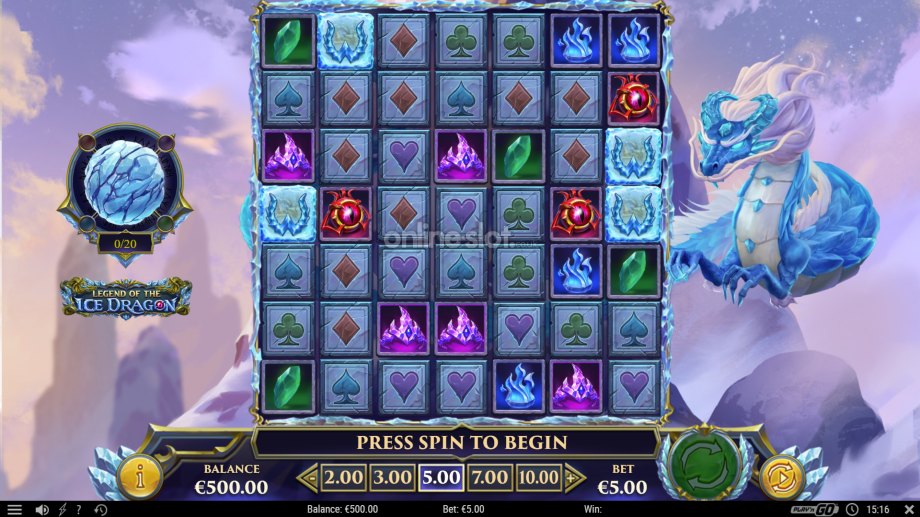 As usual for a game from Play ‘n GO, the design in the Legend of the Ice Dragon slot is impressively done. Set against a backdrop of snow-capped mountains and watched over by the mighty Ice Dragon, it has a dragon/fantasy theme. Unfortunately, it’s not connected to the Ice Dragon in Game of Thrones.

The reels are made up of lower value playing card suit symbols and 4 higher paying jewels, dragon eyes, flames and crowns.  The most rewarding symbol is the dragon eye and pays 3 x stake if you land a minimum cluster of 5 symbols. Land 30 or more of this symbol in a cluster though and it delivers a bumper reward of some 500 x your total stake.

There’s also a wild symbol. This doesn’t offer any payouts but it can substitute for all other symbols. It can also deliver some big multiplier boosts too as you’ll discover below. The design is relatively simple but it does the job very nicely.

Legend of the Ice Dragon Mobile

If you enjoy slots that offer plenty of variety then this frozen land should appeal as there are loads of extras to get stuck into. With 9 bonus features, they include wild multipliers, 3 randomly triggered modifiers and 4 potential features.

When a winning cluster is created, the Cascading Wins feature applies. The winning symbols are blasted off the grid and new symbols drop in and replace them and a new payout consideration is made. These cascades keep on coming as long as a new winning cluster appears.

On any winless base game spin, you could benefit from 1 of the following 3 Freezing features: 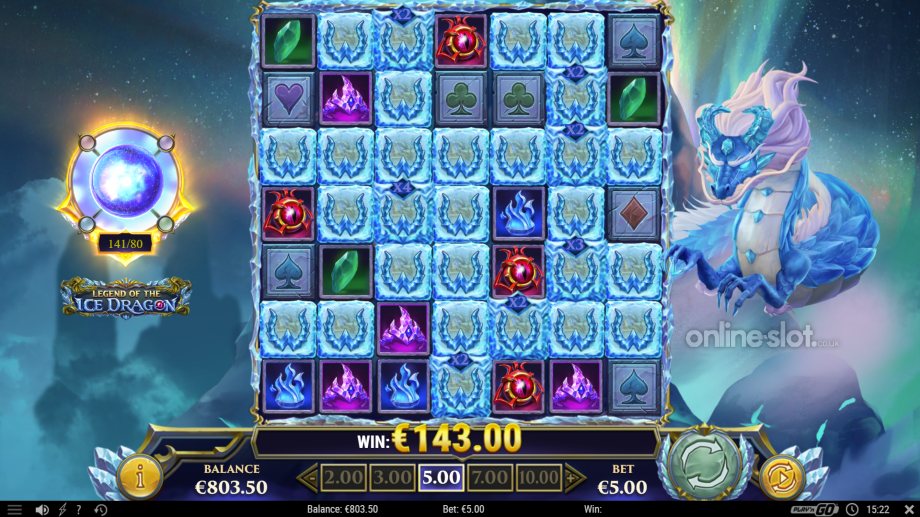 Each time you land a winning cluster, those symbols are added to the Ice Crystal Charger. Collect 20 or more symbols in the Charger from a single spin and set of cascades and you’ll trigger the Ice Crystal features:

It’s possible to overcharge the meter. For every 10 extra symbols above 80 that are collected, 2 extra Ice Frames are added to the grid. The highest multiplier is used for each winning cluster.

There’s loads going on in the Legend of the Ice Dragon slot. Players who like plenty of variety from their gameplay will find much to like in this wintry fantasy.

With the wild multipliers, freezing modifiers and the Ice Crystal features, there’s ample potential for action. That’s on top of the cluster pays and cascading reels. It’s volatile too. With 6,000 x stake max wins, the bigger wins will come the multipliers which can reach 8x.

However, it has many similarities to Play ‘n GO’s Wild Frames slot. With a different theme of course, Wild Frames allows for multipliers up to 9x and max wins of 7,000 x stake. The RTP is also 96.5% in Wild Frames as opposed to 96.29% in Legend of the Ice Dragon.

If you’re after grid slots, there are better options than Legend of the Ice Dragon. Relax Gaming’s Money Train 2 and Push Gaming’s Jammin’ Jars 2 come to mind straight away.

Legend of the Ice Dragon FAQs

What is Legend of the Ice Dragon RTP?

The Legend of the Ice Dragon RTP rate is 96.29%. Just above average, the variance is high and classed as 8/10 by developer Play ‘n GO.

What is Legend of the Ice Dragon max win?

The maximum win per spin is 6,000 x your total stake. The key to big wins is from the multipliers which derive from the Ice Frame feature.

Are there any Legend of the Ice Dragon free spins?

No, there are 9 bonus features in total though. There are 3 random Freezing features which give you wild extras. There are also 4 Ice Crystal features which transform symbols, add wilds, remove symbols and add Ice Frames with multipliers.

Is there a Legend of the Ice Dragon demo?

The Legend of the Ice Dragon free play version is available here at Online-Slot.co.uk. It’s available to play on all compatible devices including mobiles.