Based on the ancient Egyptian lord of the underworld, judge of the dead and supposed turner of the rays of the sun into gold, the Golden Osiris slot is cascading reels game from Play ‘n GO. Played on a 7x7 grid, winners are created by landing clusters of 5 or more matching symbols. Highlights include hidden wilds, which when revealed can come with multipliers of up to 10x attached. Fill the Pyramid Charger and a randomly chosen symbol expands to join adjacent clusters and a potentially much bigger win. There’s also a free spins round where the Pyramid Charger is activated following each free spin. Find out more about this Egyptian treasure hunt in our in-depth Golden Osiris review.

Where to Play Golden Osiris Slot

The Golden Osiris slot is a cluster pays game that plays out on a 7 reel, 7 row grid. To create a winner, land a cluster of 5 or more matching symbols or wilds. The bigger the cluster, the better the award.

You can start this treasure hunt at stake levels that start at 10p and rise to a maximum of £100 per spin. Scroll along the figures below the reels to adjust your stakes. Autoplay is available here too. Click on the lightning bolt in the bottom left-hand corner of the screen if you want to activate turbo spin mode.

The Golden Osiris RTP is 96.27%. The volatility here is in the medium to high range coming in at around 7 out of 10 on the variance scale. The Golden Osiris maximum win is 12,000 x your total stake from a single spin. 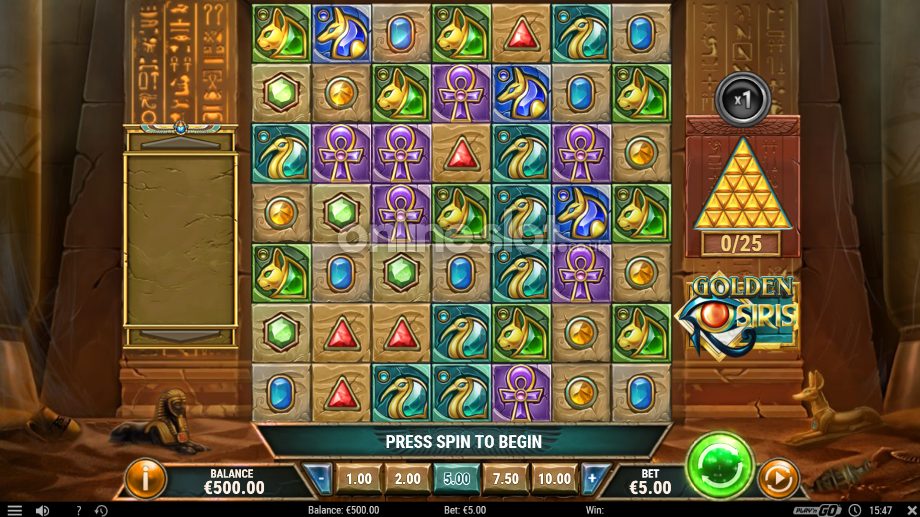 As usual for a Play ‘n GO game, the visuals in the Golden Osiris slot are very easy on the eye. With an ancient Egyptian theme, the game is based on 1 of Egypt’s most important deities who was also the god of the Underworld (Osiris). The simple, colourful imagery is very nicely done. It’s not as ornate as what you’ll find in some similarly themed slots but the visuals are lovely and sharp.

The entrance to a pyramid or palace forms the backdrop the game grid. There you’ll find 4 lower value gemstones and 5 more rewarding Egyptian hieroglyph symbols. In order of value are the bird, cat, ankh cross, jackal and scarab beetle. A cluster of 5 scarab beetles pays 1 x stake. Land a cluster of 15 and that rises to 50 x your total stake.

Golden Osiris has been fully optimised for smartphone play. The symbols in the 7×7 game grid are quite small but the imagery is sharp enough for this not to be a problem. The Golden Osiris mobile slot works just fine.

Cascading reels are central to the action in the Golden Osiris slot. They in turn can bring more extras into play including wilds with multipliers and charged symbols that expand to join adjacent clusters. Topping things off is the free spins feature.

Winners in Golden Osiris are formed by landing clusters of 5 or more matching symbols. When a winner is created, those winning symbols are blasted off the reels and a cascade follows with new symbols dropping in to replace them. A new payout consideration follows. Cascades keep on coming until no new winning combination is created.

Located behind standard symbols is a quartet of hidden wilds. The wilds become active when a symbol makes up part of a winning cluster and is removed from the grid. The wild substitutes for everything bar the bonus scatter and can come with a multiplier of up to 10x attached. Up to 6 wilds are added to the grid with each new cascade.

Each symbol in a winning cluster helps to fill the Pyramid Charger. Fill the Pyramid with 25 symbols and it opens to reveal a symbol. All examples of this randomly chosen symbol on the reels randomly convert an adjacent symbol (including clusters of up to 4 symbols) into the same symbol. A payout consideration follows. The Pyramid is rechargeable. The first charge brings with it a multiplier of 3x. Subsequent recharges can take this up to 30x. 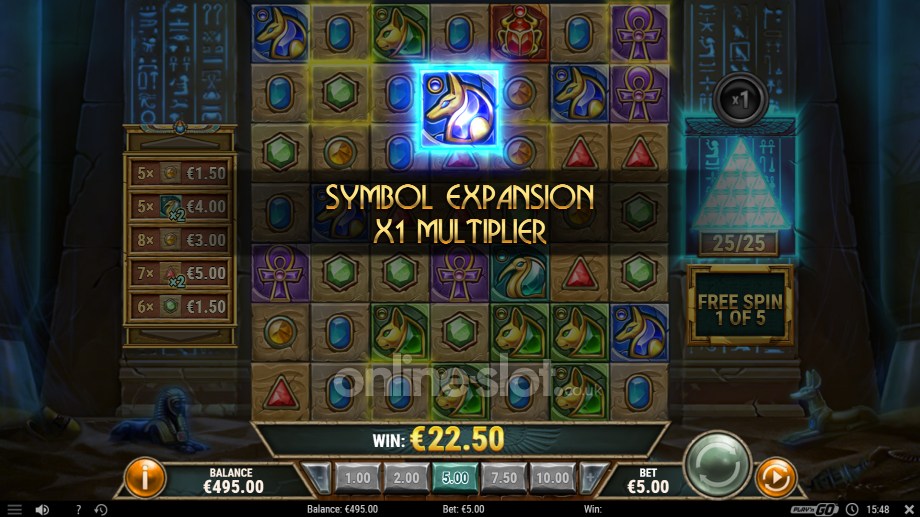 Land 2 scatters on the same base game spin and the symbols adjacent to them are destroyed and a new cascade follows, giving you another opportunity to find that all-important third scatter to trigger the free spins round. This is known as the Second Chance feature.

Anyway, the Free Spins feature is triggered by landing 3 scatters on the same spin. You’ll then go on to play 5 free spins.

The Pyramid is fully charged on each free spin, so expect to see plenty of bird, cat, ankh, jackal and scarab symbol transformations. The Hidden Wilds are active during the free spins meaning multipliers up to 30x. Unlimited retriggers are possible here too.

The appetite for all things ancient Egyptian shows no sign of slowing down. In the Golden Osiris slot, Play ‘n GO has created something a little different from the standard trip to the land of the Pharaohs.

The cascading reels, Pyramid Charges and hidden wilds can certainly rev up the base game. The number of free spins on offer isn’t large but with the Pyramid Charger activating following each free spin it can still be well worth landing. The key to winning big is from the multipliers that the Pyramid Charger can bring. Your chances increase in the free spins as it’s active on each of them.

Showcasing Play ‘n GO’s usual design flair and volatile enough to keep things interesting, Golden Osiris is an innovative take on this classic slot theme. Alternatively, you could stick the Book of Dead if you want the same theme and simpler gameplay.

What is the Golden Osiris RTP?

The Golden Osiris return to player rate is 96.27% which is slightly better than average and a little higher than what you’ll normally find in a Play ‘n GO slot game.

What is the Golden Osiris max win?

The maximum win is 12,000 x your total stake from a single spin. With big wins, the variance in Golden Osiris isn’t sky high and rated as 7/10. The bigger wins will come from the multipliers from the Pyramid Charger.

Is there a Golden Osiris free spins feature?

Trigger the Free Spins feature where you can get infinite 5 free spins. The Pyramid Charger triggers on each free spin, transforming symbols and giving you multipliers up to 30x to create potentially bigger and better winning clusters.

How does the Pyramid Charger feature work?

When a symbol is part of a win, it fills the Pyramid Charger. Fill it with 25 symbols and it will reveal a symbol with all instances becoming that symbol. When you recharge it, multipliers up to 30x come into play.