Powered by Play ‘n GO, the Gold Volcano slot is an 8 reel game in the shape of a volcano with cluster pays wins. With a volcanic theme, you can spin away from 20p a spin on all devices. It offers random features in the base game which can give you symbol shuffles, a layout change for more ways to win, added wilds and wild multipliers. Then there’s the Crystallisation feature where symbols upgrade to the most valuable symbol for bigger wins. Finally there’s the Eruption feature where you get free spins on an expanded 8x8 grid which can also have multipliers.

Where to Play Gold Volcano Slot

The Gold Volcano slot takes place with 8 reels and uses a Cluster Pays engine. Oddly, you will see 3, 4, 5, 6, 6, 5, 4 and 3 symbols on each of the respective reels in the shape of a volcano. 4 or more connected symbols, either horizontally or vertically, will award a cluster win. Only the highest value cluster is paid.

Stakes cater to all pockets as you can play from 20p to £100 per spin. As you’d expect, Play ‘n GO has an Auto Play function where up to 100 auto spins can be selected. You can customise your experience by setting win/loss limits, single win limits and stop the Auto Play if you trigger a bonus feature.

Rated as 6/10 variance wise, this medium variance slot has the potential to pay up to 10,000 x your total stake. The payback means the RTP is 96.2% which is slightly higher than usual for an online slot game.

The Gold Volcano slot comes has lots of bonus features which isn’t the norm for developer Play ‘n GO. There are random extras in the base game as well as symbol upgrades and free spins on an expanded 8×8 grid. Here, you can win more free spins and benefit from multipliers.

When you get a winning cluster, the Cascading Reels feature kicks in. The lava rises which pushes more symbols onto the grid. Basically, winning symbols are removed with new symbols filling the empty spaces.

There is also a Pressure feature which is triggered randomly when winning symbols are removed from the grid. A wild is then created in an empty space before new symbols drop in. Wilds can randomly have a 2x multiplier. If you get more than one multiplier wild, the values multiply with one another.

The Crystallisation feature is triggered when you fill the meter with scatter symbols (the volcanic piece of rock). For every 3 symbols collected, the feature upgrades a different precious material into the most valuable symbol (gold). There are 3 levels that each require 3 scatters to fill. The meter resets after every spin in the base game. The meter doesn’t reset when triggering the Eruption feature.

The Eruption feature is activated when you get 6 consecutive cascades and no more further wins are created. You begin with 5 free spins.

More importantly, the free spins are played on a bigger 8×8 grid as the volcano erupts on each free spin to spew out more symbols and fill the grid. You can also retrigger the feature with 1 extra free spin awarded every time (for 6 cascades).

Lastly, the Crystallisation feature is active meaning the meter doesn’t reset between free spins. You can also benefit from the Pressure feature meaning multipliers can be active.

Theme – Audio & Design Features – get ready to bring the heat 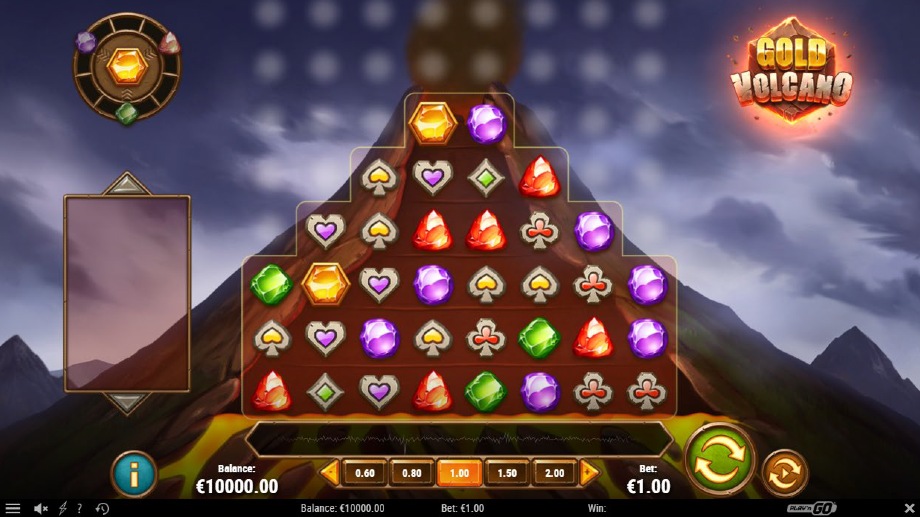 The Gold Volcano slot has a volcanic theme and is set on the island of Cash-a-Mundo where the Gold Volcano has laid dormant for thousands of years. With a volcano in the backdrop, it has cartoon style graphics which are high definition.

Symbols on the reels include low value cart suits which are encased in stone. The more valuable symbols are represented by 4 precious materials. The gold symbol is the most valuable giving you 1,000 x your total stake for 30 or more on the grid.

Gold Volcano comes with 2 wild symbols. There’s the standard wild (W) which substitutes for all symbols bar the scatter. The second wild also replaces all symbols (bar the scatter) but adds a 2x multiplier – this appears in the Pressure feature and free spins. The piece of volcanic rock is the scatter.

The Gold Volcano slot is something of a new direction for Play ‘n GO. Despite the fact they’ve released grid slots previously, this game offers unique bonus features not seen in previous released.

The medium variance is somewhat of a surprise but a welcome one. It has plenty going on with the various bonus features to keep you coming back. It’s all about the Eruption feature where the free spins are played on an 8×8 grid with more potential ways to win. Add in the multipliers and potential 10,000 x stake wins and Play ‘n GO has created a winner in Gold Volcano.

❓ Where can I play the Gold Volcano slot?

The Gold Volcano slot is available at Play ‘n GO casinos. This means you have lots of online casino sites to play Gold Volcano at. Check out our recommended casinos which are all UK licensed and have their full range of slots.

? What is the Gold Volcano RTP?

The Gold Volcano RTP is 96.2%. The variance is just above medium (6/10) meaning you should get plenty of entertainment for your bankroll. It has lots of bonus features to keep things interesting and fresh.

? What is the Gold Volcano max payout?

The most you can win from the Gold Volcano slot is 10,000 x your total stake. To achieve this, you need to get wild multipliers in the Eruption feature where you’ll play on an expanded 8×8 grid with more potential ways to win.

⚡ Is there a Gold Volcano mobile slot?

Play ‘n GO develops all their slots using HTML5 technology. This means that the Gold Volcano slot game can be enjoyed across iOS, Android and Windows powered devices.