Head to a frozen tundra for some unusual Arctic adventure in the Frozen Gems slot. Created by Play ‘n GO, it’s a 5 reel, 3 row, cascading pathways video slot where the number of ways to win can reach 8,748 with expanding multipliers. Unlock the frozen bonus symbols above the reels to bring splitting scatters and bonus wilds into play. The splitting scatters split all symbols into 2 or 3, increasing the number of ways to win. The latter turns whole reels wild. Trigger the Frozen Spins feature for free spins with an expanding multiplier that doesn’t reset following a winless cascade. Is this a winter wonderland or a barren winter desert? Find out in our deep dive Frozen Gems review.

Where to Play Frozen Gems Slot

The Frozen Gems slot starts with 5 reels, 3 rows and 243 ways to win but the Bonus Reel extra can take this figure to 8,748 ways to win as you’ll find out below. Land 3 or more matching symbols or wilds on adjoining reels from left to right, starting from reel 1 and you’ll create a winning combination.

Play’n GO’s usual stake levels of between 20p and £100 per spin are available here. So too are the developer’s standard autoplay options.

The Frozen Gems RTP is 96.36%. This isn’t as volatile as some slots in the Play ‘n GO portfolio. The variance here comes into the medium to high category at about 7 out of 10. The max win is 10,000 x your total stake which is higher than the usual top figure found in games from this developer.

Theme – Audio & Design Features – head off on an arctic adventure 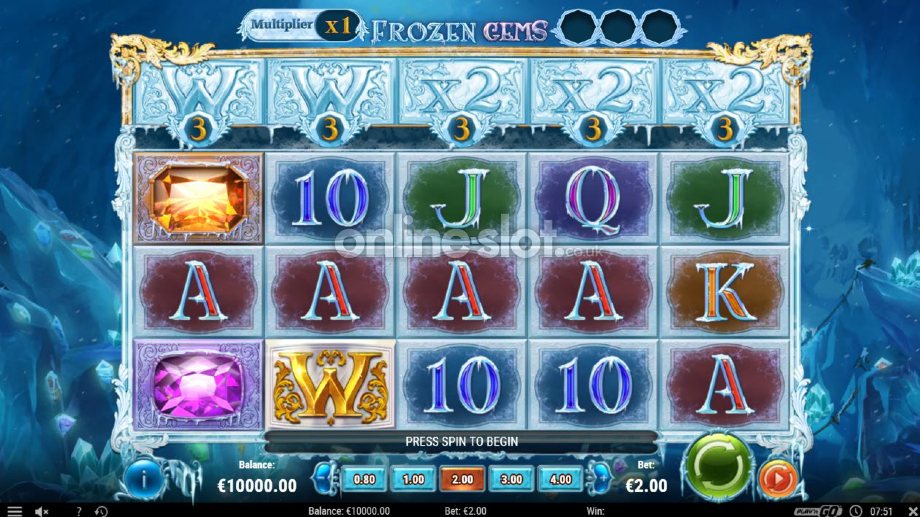 The Frozen Gems slot has an arctic theme as you head to frozen wasteland. The story is that you’ve been separated from your expedition but can discover great treasures hidden within the ice. Honestly, the visuals are a little basic but they are crisp and clear. This feels a bit too close to Disney’s Frozen movie.

Set against a frozen, mountain range, the reels are made up of A to 10 royals and a collection of higher value gemstone symbols. The orange gemstone is the highest value symbol giving you 0.25, 0.6, or 1 x your stake for 3, 4 or 5 in combination.

The W symbol is the wild and substitutes for all symbols mentioned above. 5 wilds in combination will pay you 2.5 x your total stake.

Frozen Gems has been fully optimised for play on smartphones (as well as for desktop and table play). The frosty visuals are nice and clear as usual, even when playing on a small screen device. We had no issues with the Frozen Gems mobile slot.

In the Frozen Gems slot, the gameplay is a little unusual. Cascading reels are standard enough but the way the extra symbols and ways to win are added is rather different. Look out for plenty of added wilds too as well as a free spins feature with expanding multipliers.

As mentioned, each spin starts with 5 reels, 3 rows and 243 ways to win. When you get a win, the Cascading Reels feature is triggered. The successful symbols are removed and new ones replace them. A new payout consideration then follows. The cascades continue as long as you form a new winner.

Above the main set of reels is the Bonus Reel. This is made up of 5 different positions which are usually frozen. To unlock a Bonus Reel feature, you need 3 winning symbols or scatters on the corresponding reel. Here’s what the Bonus Reel can offer:

When the Splitting Scatters feature are activated, the extra symbols increase the number of ways to win that are active for that spin. Fully expanded, the reels can offer 8,748 ways to win. The configuration of symbols on the Bonus Reel is as follows:

Which reel they appear above changes with each spin.

Land 3 scatter symbols on the same spin and you’ll receive a payout of 5 x stake as well as 9 free spins in the Frozen Spins feature. Any multiplier that is active on the triggering spin is carried over to the free spins.

Each cascade win during the feature increases the multiplier by 1. The multiplier doesn’t reset following a winless free spin either. Each scatter that lands during this round adds 1 more free spin to your total. There’s no limit to the number of free spins or the potential size of the multiplier.

Frozen Gems Review Summary – all about the splitting scatters

The splitting symbols are the main element to the Frozen Gems slot. They can have a very decent impact, especially when combined with the cascading reels and expanding multipliers. It will remind you of the Splitz mechanic used in Yggdrasil Gaming slots like Syncronite Splitz.

The payout numbers aren’t very large for individual combinations so you really need to get lots of ways to win and multipliers up to get things moving. The Frozen Spins feature is a decent feature too, especially if you can carry over a decent starting multiplier and you get plenty of cascades.

This theme here isn’t one of our favourites (but the gameplay is decent enough. If you enjoyed the Perfect Gems slot (by Play ‘n GO), you should find enough in common here to make Frozen Gems worth considering.

What is the Frozen Gems RTP?

The Frozen Gems return to player rate is 96.36%. That’s a little higher than you’ll find in most Play ‘n GO slots which usually hover around the 96.20% mark.

What is the Frozen Gems max win?

The maximum win per spin is 10,000 x your total stake. The key to winning big is by increasing the number of ways to win to 8,748 and from the multipliers.

Is there a Frozen Gems free spins feature?

Trigger the Frozen Spins feature where you can play with unlimited free spins. There’s also an expanding multiplier that increases with each cascade and doesn’t reset following a winless drop.

How do the Bonus Reel features work?

There’s a Bonus Reel above the main reels. When you get certain combinations, you’ll trigger 1 of the 3 Bonus Reel features which give you wilds as well as split symbols into 2 or 3. This can increase the number of ways to win to 8,748.