Discovering the riches hidden in an Egyptian pyramid is the name of the game in the Cat Wilde and the Lost Chapter slot, another treasure hunting adventure from Play ‘n GO. This 5 reel, 10 payline game features lavish design that’s fit for a Pharaoh. There’s are some impressive features on offer here too. Trigger the Free Spins feature and your winning opportunities are boosted by the presence of expanding symbol that fills the reel when it lands. Better still is the Pyramid Spins feature where the expanding symbol is active for the whole of the round. Discover more in our in-depth Cat Wilde and the Lost Chapter review.

Where to Play Cat Wilde and the Lost Chapter Slot

New Customers from UK & IRL only. Deposits made with e-wallets are not valid for this promo. Bonus wagering x35 on eligible games. Winnings from bonus capped at £500. Spins available after bonus is redeemed/lost. Opt in required. Full T&C’s apply. #ad

The Cat Wilde and the Lost Chapter slot is played on a 5 reel, 3 row, 10 payline machine. Landing 2 or more high value symbols or wilds across a payline from left to right will earn you a winning combination. You’ll need 3 for the lower value royals. Things are a little different in the feature which I’ll look at shortly.

Stake levels here start at 10p per spin and rise to a maximum of £100 per spin. The autoplay option allows you to run 10, 25, 50, 75 or 100 autospins. There are also ways to set win and loss limits as well as ending the autospins whenever you trigger the bonus round.

The Cat Wilde and the Lost Chapter RTP is 96% which is pretty standard for a slot from the Play ‘n GO catalogue. In fact, it’s their go-to rate. I found the volatility here to be high so proceed with caution. As a result, the max win is 10,000 x your total stake per spin. 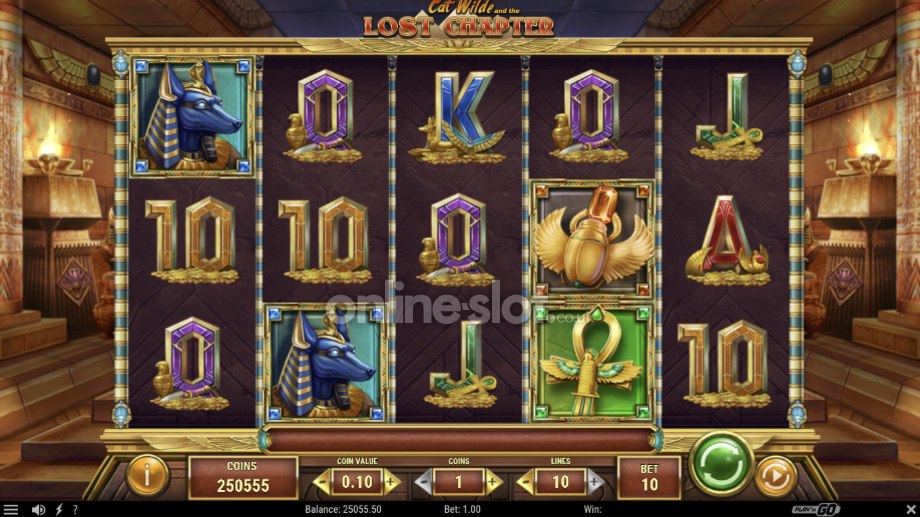 There’s a sweeping orchestral soundtrack playing while you spin which has just the right hint of Arabia. Combine that with the superbly drawn and exceedingly glossy visuals and you have a real treat for the senses.

The reels are dripping in gold. There you’ll find A to 10 royals that have been embellished with a hieroglyph. More rewarding are the scarab beetle, ankh cross and the jackal god Anubis. Adventurer Cat Wilde is the most lucrative standard symbol. Land 2, 3, 4 or 5 of her on a payline and you’ll pocket an award equal to 1, 10, 100 or 1,000 x your total stake.

Those same payout amounts are on offer from the gold wild symbol which can appear on all 5 reels and substitutes for everything bar the pyramid scatter.

Play ‘n GO has created fully optimised versions of this ancient treasure hunt for all devices including tablets and smartphones. With its lush visuals and simple gameplay, Cat Wilde and the Lost Pages is an ideal candidate for playing on your phone. It all works very well on the small screen.

The main feature here is one that’s commonly found in slots that have an ancient Egyptian theme. The free spins here come with a twist though as from there you can trigger the Pyramid Spins which is where things have the potential to get very interesting indeed. 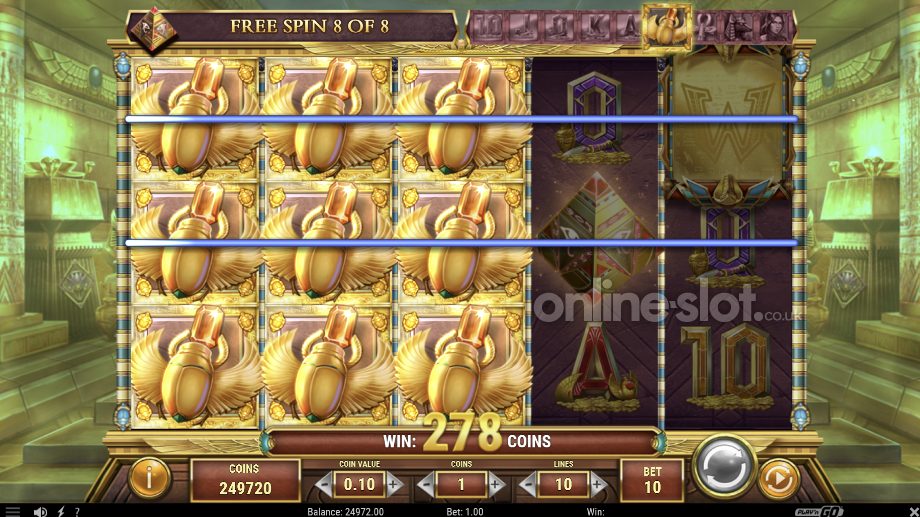 The pyramid featuring the Eye of Ra and the blue point is the game’s standard scatter symbol. Landing 3, 4 or 5 Eye of Ra scatters on the same spin will get you a payout equal to 1, 10 or 100 times your total stake. This also activates the Free Spins feature.

Once triggered, you’ll receive 8 free spins. On each free spin, 1 will be the special expanding symbol. This changes with each free spin. You can see which symbol is set to expand on that spin in the meter above the reels. The chosen symbol expands to fill the whole of that reel of the expansion leads to the creation of a winning combination.

Your potential max win per free spin depends on which special expanding symbol you play with. The higher value the symbol, the bigger your potential payout. Here’s what a screen full of every symbol will pay:

The Pyramid Spins feature is triggered by landing between 2 and 5 scatters on the same free spin. The expanding symbol, once activated, is then chosen for all Pyramid Spins.

Each time you land a pyramid wild scatter,  1 extra Pyramid Spin as added to your total. There’s no limit to how many pyramid spins you can play with either.

This second outing for our plucky treasure hunters shares many similarities with the Cat Wilde and the Doom of Dead as well as the Book of Dead slot which has proved a smash hit for Play ‘n GO.

The opulent design is very nicely put together and the main feature option revolves around free spins with expanding symbols. There’s been the odd tweak or 2 to the gameplay in the latest incarnation thanks to the Pyramid Spins feature. The maximum win has been ratcheted up too, rising from 5,000 x to 10,000 x stake.

If you’ve enjoyed Play ‘n GO’s other Egyptian-themed releases, you should find plenty to like in the simple but volatile Cat Wilde and the Lost Chapter slot. Looking for bigger potential wins? The Book of Shadows slot by Nolimit City also has special expanding symbols but the max win is 30,338 x stake per spin.

What is the Cat Wilde and the Lost Chapter RTP?

The Cat Wilde and the Lost Chapter return to player rate is 96.2%. This is the same as other slots from Play ‘n GO such as Book of Dead.

What is the Cat Wilde and the Lost Chapter max win?

The maximum win per spin is 10,000 x your total stake. This can be won by filling the reels with Cat Wilde symbols. It’s more likely in the features due to expanding symbols.

Is there a Cat Wilde and the Lost Chapter free spins feature?

Yes, the Free Spins feature begins with 8 free spins. A special expanding symbol is chosen for every free spin. The higher value the symbol, the better your potential max win. Look out for scatters which brings the Pyramid Spins into play.

How does the Pyramid Spins feature work?

The Pyramid Spins feature is played when you land 2-5 scatters during the free spins. The special expanding symbol from the triggering free spin remains. When you land more wild/scatters, you get more pyramid spins, with no limits.