The Blinged slot is powered by Play ‘n GO and comes with 5 reels and 10 paylines. Playable from just 10p per spin across all devices, it’s based on female hip hop band who are taking over and doing their thing. Look out for the diamond scatter as it will bring a Re-Spin feature into play where you continue to get re-spins until you get a win. With each re-spin, the multiplier increases. There’s also a Win Spins feature where each non-winning spin sees re-spins come into play with increasing multipliers. With an RTP of 96.25%, there are 5,000 x stake wins available on each spin.

Where to Play Blinged Slot

The Blinged slot has 5 reels, 3 rows and 10 fixed paylines. A winning combination is created when identical symbols appear on successive reels, starting from reel 1, on any of the 10 paylines.

The stakes suit all players as the minimum stake is 10p with the maximum stake being £100 per spin. There’s the customary Auto Play feature where up to 100 auto spins can be used. Auto Play will stop when trigger a bonus feature or if your cash increases or decreases by a chosen amount. You also have the option of a single win limit.

Rated 6/10 by Play ‘n GO in terms of variance, this slightly above medium variance slot can still pack quite the punch as the maximum win is 5,000 x stake per spin. The RTP is 96.25% which is average for a Play ‘n GO slot game. 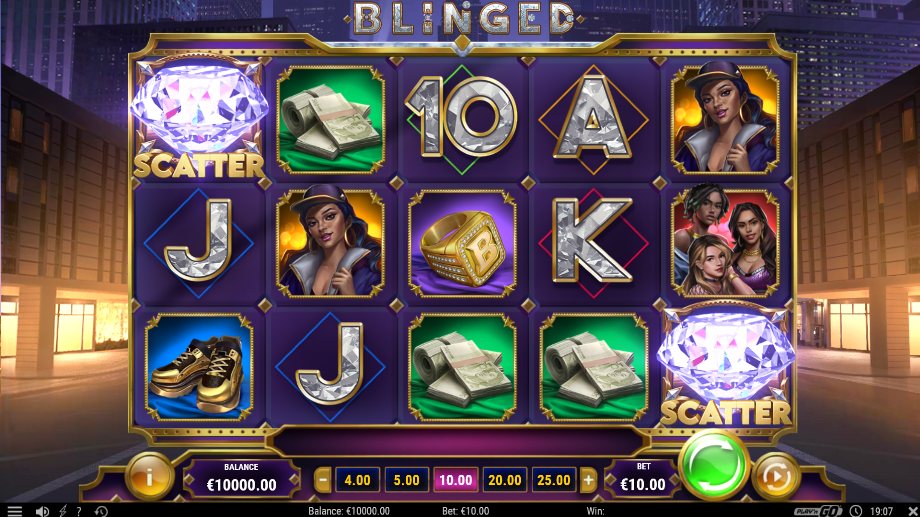 The Blinged slot has many similarities to Play ‘n GO’s Pimped slot which was released in 2015. With a hip hop theme, it focused on a girl group who are taking over and doing their thing. The aim is to have the attitude, talent and power to get your wealth and rise to the top. Yes, a little cheesy really.

In the Urban Dictionary, ‘bling’ is defined as “any shiny thing which distracts morons such as rappers”. We are not sure that was Play ‘n GO’s intention but the graphics and animations are not as sharp and well executed as you’d expect from their slots.

On the reels you will see blinging A, K, Q, J and 10 royals. You will also see wads of cash notes, gold sneakers, bling rings and the 3 members of the girl group. The most rewarding symbol is the girl with the purple attire which pays 5, 15 or 75 x stake for 3, 4 or 5 in combination.

Then you have the rapper girl with the ‘Wild’ hat on which acts as the wild symbol. As well as substituting for any symbol bar the scatter, the wild pays 5, 20 or 100 x stake for 3, 4 or 5 across a payline.

Whilst it’s not the best-looking slot Play ‘n GO has produced, the Bling slot can be played on desktop, mobile and tablet devices. The more basic visuals worth rather well on smartphone screens.

The Blinged slot comes with 2 bonus features which are triggered by the diamond scatter. Landing 2 will activate the Re-Spin feature where you get continuous re-spins until you get a win. The multiplier also rises with every re-spin. If you get 3 scatters, you’ll play the Win Spins feature where each non-winning spin gives you re-spins with the multiplier increasing. You can also win more win spins.

Loo out for the giant diamond symbol as this is the scatter. If you land 2 scatters on the reels, you will be awarded 1 win spin. If that win spin doesn’t give you a win, the Re-Spin feature is triggered which will also apply a multiplier. The re-spins continue until you get a win. With each re-spin, the multiplier increases progressively by 1. 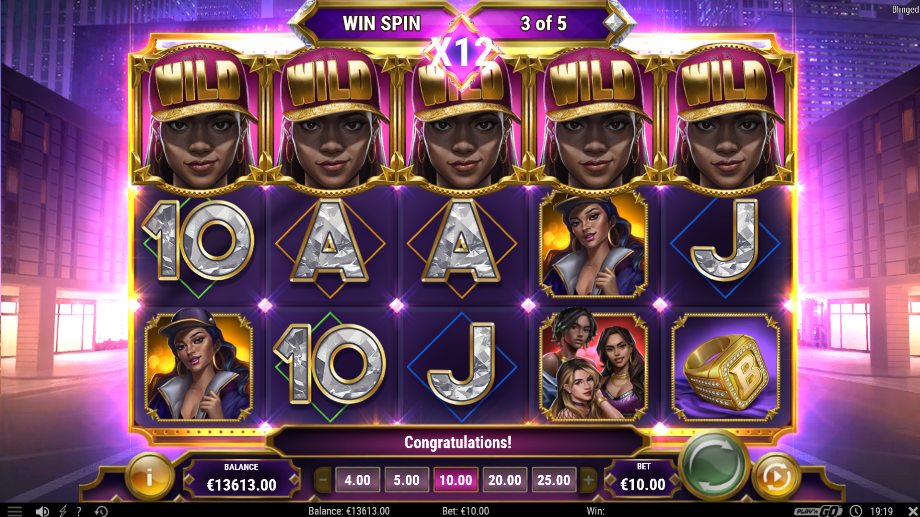 When the diamond scatter appears simultaneously on reels 1, 3 and 5, you will trigger the Win Spins feature where you have more of a chance to grab to slot’s riches. You will then be awarded 5 win/free spins.

Like above, each non-winning win spin will trigger the Re-Spin feature which continues to retrigger until you get a winning outcome. Furthermore, the multiplier continues to increase by 1 with every re-spin.

If you land a scatter on the reels, you will get an extra win spin. There’s up to 20 win spins/free spins to be played with in total. As for the multiplier, it can increase infinitely.

Blinged Review Summary – all about the multipliers

The Blinged slot is quite simple. It focuses on the diamond scatter which can lead to the 2 bonus features. The key to winning big is to get lots of non-winning win spins which will see the multiplier increase. With maximum payouts of 1,000 x stake if you fill the reels with wilds, the multipliers are key to achieving the 5,000 x stake max win.

Very similar to the Pimped slot, the Blinged max win is half of it’s prequel (5,000 x stake vs 10,000 x stake per spin) which is a shame. Whilst the medium variance will appeal to many, the Blinged slot would have been a lot more appealing if the max win wasn’t capped at 5,000 x stake. Other Play ‘n GO slots like Cat Wilde and the Doom of Dead or Riddle Reels: A Case of Riches offer a lot more in terms of gameplay.

What is the Blinged RTP?

The Blinged RTP is 96.25%. Rated 6/10 in terms of variance, it’s a lot more balanced than other Play ‘n GO slots meaning your bankroll will last a lot longer. The key to winning is by landing 2 or more diamond scatters on the reels which brings the bonus features into play.

What is the Blinged slot max payout?

The most you can win per spin in the Blinged slot is 1,000 x your stake. Add in the increasing multipliers from the 2 bonus features and the maximum payout is 5,000 x stake per re-spin or win spin. The likelihood increases in the Win Spins feature.

Where can I play the Blinged slot?

The Blinged slot can be played at casino sites offering Play ‘n GO slots. That’s good news for you as most casinos now have Play ‘n GO games. Check out the very best Play ‘n GO slot sites which have their full portfolio of titles.

What is the Blinged slot theme?

The Blinged slot has a hip hop theme as it focuses on a girl group who have attitude, talent and power. A little cheesy, it has 2 bonus features and the potential for 5,000 x stake wins on each re-spin or win spin.