It’s time to dust off your fedora and awaken your inner Indiana Jones and go on a quest for hidden jungle riches in the Secret Treasure slot. Created by Novomatic, it’s a 5 reel, 25 payline game that comes with a bonus round that awards free spins complete with up to 3 special symbols that can turn gold and become wild for the remainder of the feature. You’ll also have a shot at landing 1 of 2 potential progressive jackpot prizes. Find out more about this medium volatility slot in our detailed Secret Treasure review.

Where to Play Secret Treasure Slot

Like most Novomatic games, the game mechanic in the Secret Treasure slot is very simple. The action takes place on a 5 reel, 3 row, 25 payline machine. A win is formed by landing matching symbols on adjacent reels beginning from reel 1.

Stake sizes range from between 30p and £45 per spin. Click on the auto tab next to the spin button for autospins. There’s no way to set precise numbers here, nor win or loss limits. Autoplay runs until you hit stop so pay attention here.

This isn’t as fiery as some slots in the Novomatic portfolio as far as variance is concerned. The Secret Treasure volatility is in the medium range. On a scale of 1 to 10 we’d put it at about a 6. The Secret Treasure RTP is 95.19%. That’s on the low side as far as return to player rates go but not the worst you’ll see for a jackpot slot.

The maximum win is 1,000 x stake from each spin. However, the wins can be much bigger from the progressive jackpots. 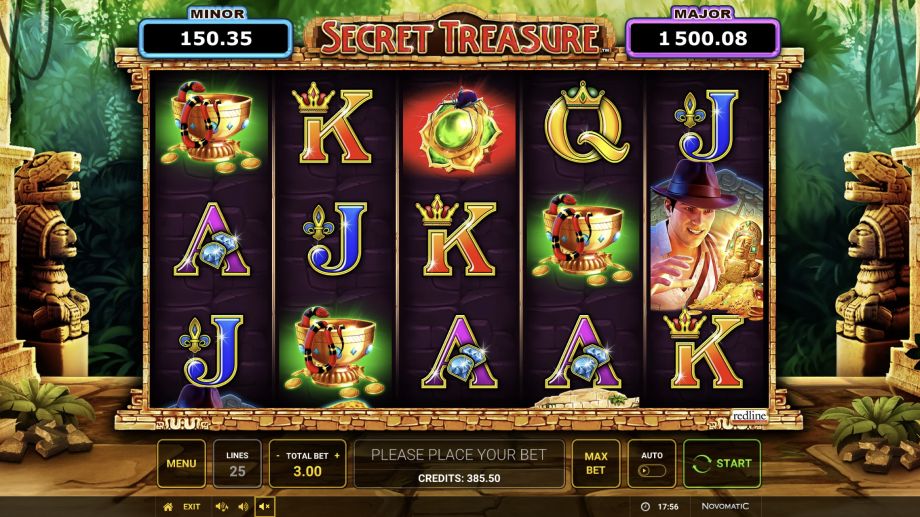 Just like the gameplay and the mechanic, the design in the Secret Treasure  slot is simply done. With dense jungle and ruined temple statues in the background, the imagery is bright, bold and very colourful.

It does have a touch of Indiana Jones about it visually. It’s not as slick and HD as some but it does the job perfectly adequately. Likewise, the stirring orchestral backing track which ramps up the atmosphere. It’s not the most sophisticated slot you’ll see as far as sound and visuals are concerned. It’s playable enough though.

Like most slots in the Novomatic catalogue, the gameplay in Secret Treasure is relatively simple. The main feature is the free spins round. This comes with a bit of a twist though. You can land up to 3 symbols that can turn into wilds for the duration of the feature. Unusually for a Greentube slot, there’s also a jackpot element. We’ll start by looking at the free spins round.

The Free Games feature is triggered in the usual manner by landing 3, 4 or 5 bonus scatter symbols on the same spin. You’ll receive a payout of 2, 10 or 50 x your total stake before going on to play the feature.

You’ll then be offered the pick of 4 different treasures. Choose one. This will reveal how many free spins you’ll receive and what symbols will turn gold and become wild for the duration of the feature.

You can land up to 10 free spins here with up to 3 symbols turning wild. The only downside here is that you can’t retrigger the free spins.

Secret Treasure also gives you the chance to hit a progressive jackpot prize. The Jackpot feature can strike at random on any spin when 2 bonus symbols land. You can check out the value of the Minor and Major Jackpots in the meters above the reels.

This treasure hunting adventure is a typical Novomatic slot. The gameplay is relatively straightforward and the colourful design isn’t a sharp as some but it works well enough.

The Free Games feature can be well worth landing thanks to the extra wild symbols. A good allocation here can deliver some very decent action. The extra wilds are your best chance of winning the 1,000 x stake max win per spin. There’s also the carrot of the progressive jackpots.

It might not be volatile enough for some tastes and the RTP is a little on the skinny side. If you like the Indiana Jones-style slots, then Novomatic’s Book of Ra Deluxe slot should be considered. The explorer looks remarkably similar and it offers 5,000 x stake payouts on each spin. It’s also Novomatic’s most popular slot by some distance.

If you’re looking for progressive jackpots, check out the Jackpot Slots section which has plenty to choose from.

What is the Secret Treasure RTP?

The Secret Treasure return to player rate is 95.19%. That’s a below average but not the worst number you’ll see for a progressive jackpot slot.

Yes, Secret Treasure gives players the chance to land 2 potential progressive jackpot prizes. Both the Mini and Major jackpots can trigger at random on any spin where you land exactly 2 bonus scatter symbols. Check the amounts on offer in the meters above the reels.

Is there a Secret Treasure free spins round?

Yes, trigger the Free Games feature by landing 3 or more bonus scatter symbols on the same spin. Then pick one of the 4 treasure symbols. This will reveal how many free spins you’ve been awarded and which symbols will be wild. You can get up to 10 free spins with up to 3 wild symbols.

What is the Secret Treasure max win?

The biggest payout available from a single spin in the Secret Treasure slot is 1,000 x your total stake. This can be won by filling the reels with explorer symbols. This becomes more likely in the free spins due to 3 extra wilds in play.