The Reel King slot is powered by Novomatic and is a popular slot machine that can be found in pubs, arcades and land-based casinos throughout the UK. With 5 reels and 20 paylines, you can spin away from 20p a spin across all devices. It comes with a Reel King feature which pays a series of prizes up to 500 x stake. This is an iconic game and 1 of the most popular in the UK. Find out why in our Reel King review.

Where to Play Reel King Slot

The Reel King slot machine has 5 reels, 3 rows and 20 paylines. To land a winning outcome, you need 3 or more matching symbols from left to right on consecutive reels. For example, you need 3 plum symbols on reels 1, 2 and 3 across the middle line.

Stakes range from 20p to £40 per spin. With an Auto button next to the Start (Spin) button, you can opt from 5 to 100 autospins. With this facility, you need to set a loss limit and single win limit.

Medium variance and nicely balanced, the maximum win is 500 x your total stake per spin. This can be won by filling all reel positions with jackpot symbols or from the solitary bonus feature.

The Reel King RTP is 94% which is below the 96% online slot average. As it’s a land based favourite, the return to player rate is pretty standard. For a slot machine found in arcades and pubs in the UK, the Reel King fruit machine, the RTP rate may vary so it’s best checking before you start playing. 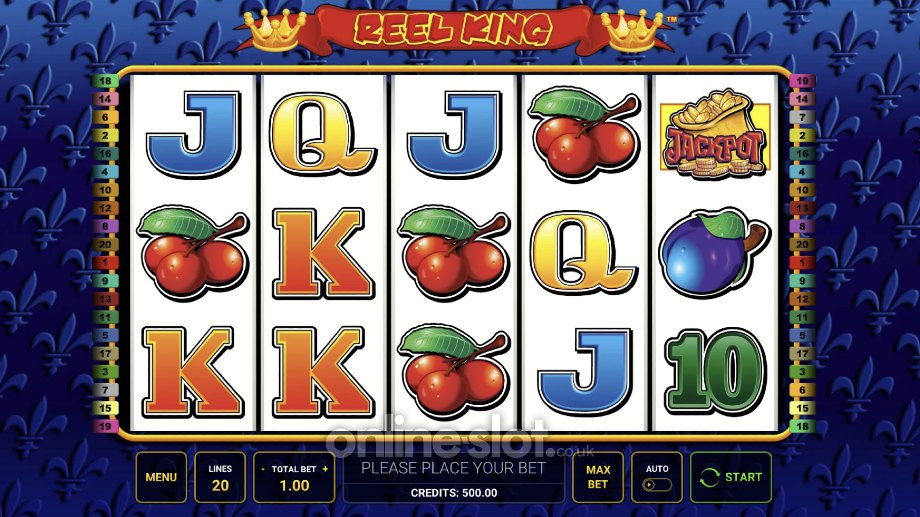 The Reel King slot has the feel of a land based slot machine. This is because it is and made its names in amusement arcades, pubs and land based casinos. It was originally developed by Astra Games which was subsequently acquired by the Novomatic Group.

With a regal theme, you get to sample the royal life. The graphics are rather basic but that adds to the charm in my opinion. The soundtrack is also simple and classic fruit machine style. Visually, it shows its age but it’s still very much loved by slots players.

With a dark blue background, the symbols appear on a plain white background. Symbols are classic fruit machine symbols with K, Q and J royals appearing. You will also see plums and cherries. The most valuable symbol oddly is the K royal which pays 3, 5 or 10 x your total stake for 3, 4 or 5 across a payline.

Then you have the Jackpot symbol which is a sack full of gold coins. Land 3, 4 or 5 on a payline to win 5, 10 or 25 x your total stake. A screen full of Jackpot symbols will result in a 500 x stake payout.

Finally, there’s a Jester’s Hat wild symbol. This replaces any symbol to help form winning combinations. However, it will appear on reels 3, 4 and 5 only.

Despite it’s age, there is a Reel King mobile slot. In fact, it has been remastered so it can be played on desktop, laptop, tablet and mobile devices. The 5×3 reel configuration lends itself well to smartphone play.

The Reel King online slot only comes with 1 bonus feature. The Reel king feature is triggered randomly on any spin and will see Reel King characters which award stake prizes. 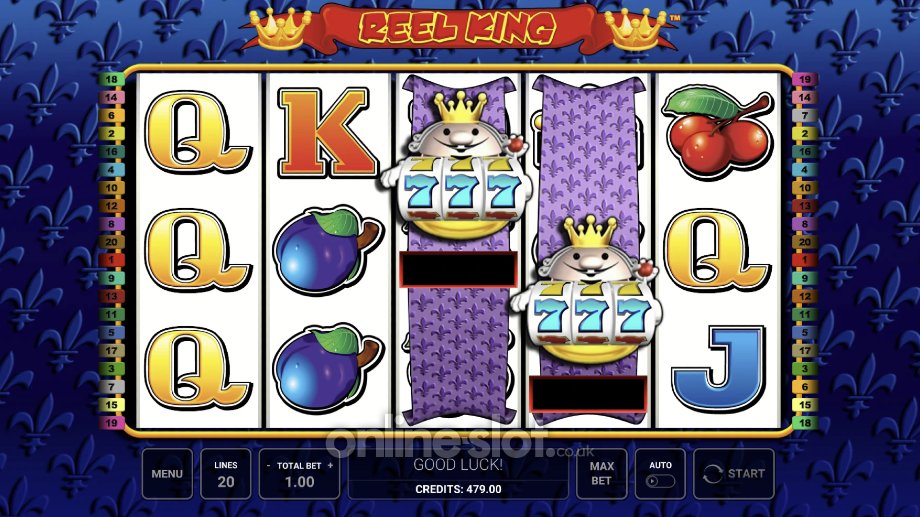 This classic game is all about the Reel King feature. This isn’t triggered in the conventional way by getting 3 scatter symbols as per most slot games out there. It is triggered at random whether you have a winning combination or not.

Once activated, you will see a cartoon King character appear on up to 5 reels. When he appears, you will see a mini slot machine spin with his own special set of reels that will spin guaranteed wins.

The feature continues until you don’t land a winning combination. With only lucky 7 symbols landing on these mini reels, you can win from 2 to 25 x your total stake for the following combinations:

The Reek King slot machine is a very popular game and can still be found in most pubs and arcades throughout the UK. The online version is also popular and is still 1 of Novomatic’s most played titles. Compared to newer slot releases, it’s dated visually and in terms of gameplay with just the 1 bonus feature.

As a result, there is a Reel King Megaways slot which was created by Inspired Gaming and comes with 7 bonus features, up to 117,649 ways to win and 12,500 x stake payouts per spin. However, many players prefer simple games like NetEnt’s Starburst.

If you want to sample classic fruit machines with simple bonus features, I recommend play Reel King online. You could get lucky in the bonus feature and walk away with a 500 x stake win.

Being 1 of the most online slots, you can play Reel King free at most casino sites. You can also play the Reel King free play version here at Online-Slot.co.uk. The demo version is available to play on desktop, mobile and tablet devices as desired.

What is the Reel King RTP?

The Reel King return to player rate is 94% which is low compared to new slot games. Being a classic fruit machine found in pubs and arcades, the RTP rate is pretty standard.

What is the Reel King max win?

The most you can win whilst playing Reel King online is 500 x your total stake. This can be achieved by filling the reels with Jackpot symbols or from the solitary bonus feature.

How does the Reel King feature work?

With the Reel King feature randomly triggered on any spin, up to 5 Reel Kings can appear each with their own set of reels. You will get Reel King free spins essentially with lucky 7s symbols landing. This can lead to 500 x stake wins in total.

Yes. The Reel King free play version is available online can be played in demo mode here at Online-Slot.co.uk. You have the choice to play on desktop, mobile or tablet devices.