Lord of the Ocean Magic: Demo

Where to Play Lord of the Ocean Magic Slot

Novomatic has kept things nice and straightforward when it comes to the game engine in the Lord of the Ocean Magic. Slot It’s played using a classic 5 reel, 3 row machine which offers 10 paylines. Landing 2 or more matching high value symbols in a payline (or 3 or more lower value royals), starting from reel 1 delivers a winning combination. It’s as simple as they come.

You can join Poseidon at stake levels that start at 10p per spin which makes it a decent pick for small stakes players. The max bet per spin is £50. As usual for a Novomatic slot, clicking on the Auto button activates the autospin mode. These will keep on going until you click stop so keep an eye on it. 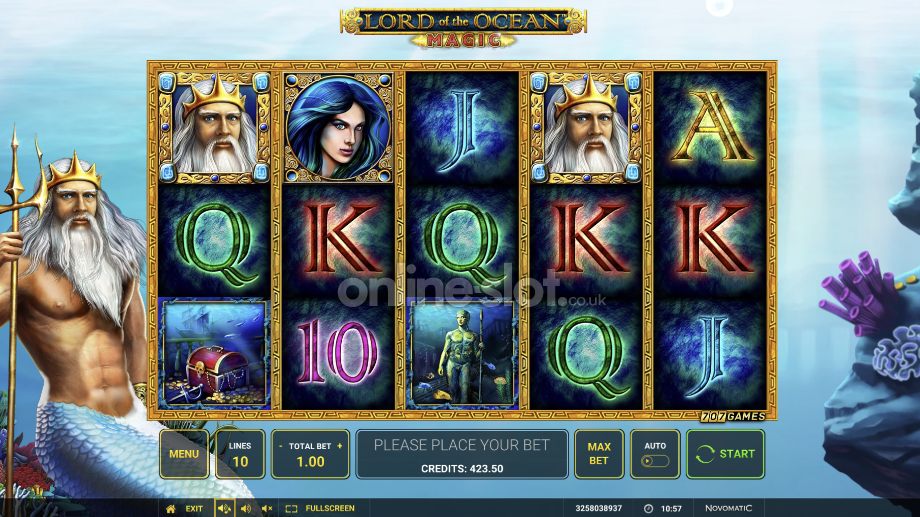 There’s a suitably nautical feel to the design in the Lord of the Ocean Magic slot. Watching over proceedings is an animated Poseidon who is perched to the side of the reels.

Even if you didn’t know which developer had created Lord of the Ocean Magic, you could tell this was a Novomatic slot simply by its design. This slot comes with the Novomatic house look, complete with the classic bangs and bleeps backing track. It’s simple but the design works rather well.

With assorted aquatic life in the background, the reels are made up of A to 10 royals as well as a treasure chest, statue and mermaid. Poseidon tops the bill as far as payouts are concerned, awarding 1, 10, 100 or 500 x your total bet if you managed to land 2, 3, 4 or 5 on 1 of the game’s 10 paylines.

The gate symbol is wild. This substitutes for all the standard symbols when it makes up part of a winning combination. The gate is the game’s scatter too.

Bonus Features in Lord of the Ocean Magic

As usual for a slot from Novomatic, the features here are limited. The one feature that is on offer here can certainly deliver a knockout payout punch though. It’s a free spins round where you could end up with not one but multiple expanding symbols active. 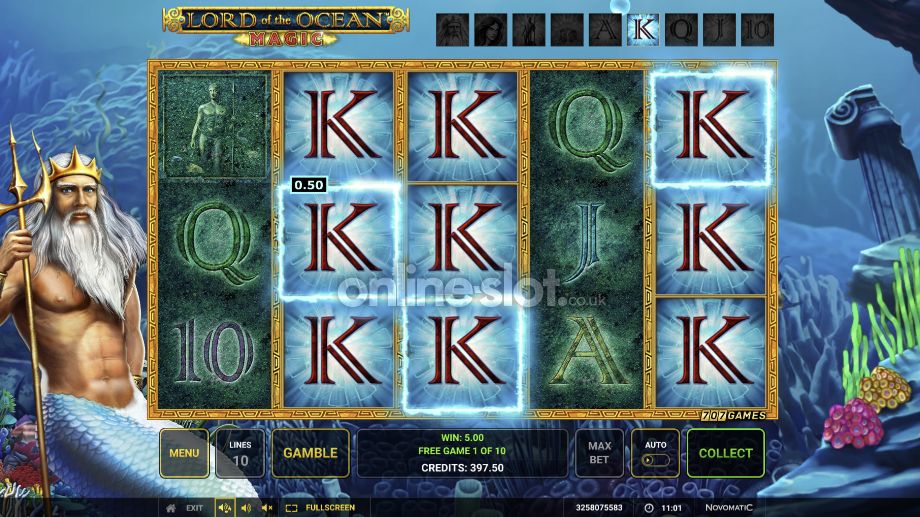 Before the first free spin, 1 standard symbol is picked at random to be the special expanding symbol. Whenever this special symbol appears, it will fill the whole of its reel. The expanding symbols don’t have to be on adjacent reels to form a winner either. So far, it’s exactly like the original Lord of the Ocean slot game.

Landing 3, 4 or 5 gate scatter symbols on the same spin delivers another payout of 2, 20 or 200 x your total stake as well as triggering another round of 10 free spins. A retrigger also brings another expanding symbol into play. There’s a meter above the reels which shows you which symbols will expand.

Multiple retriggers means not just loads of extra free spins but also more extra symbols which can give your winning chances a big leg up when you trigger the Free Games feature. If you were to retrigger 4 times for example, you’d get an extra 40 free spins as well as 4 more special expanding symbols.

Simple gameplay and explosive features have been Novomatic’s usual recipe for success and they’ve largely kept to the standard formula in the Lord of the Ocean Magic slot. The free spins with expanding symbols is a staple feature for slots from the Austrian developer. Novomatic has revved it up even more by allowing multiple expanding symbols if you land a retrigger.

If you’re a fan of the developer’s simple, volatile slots, expect more of the same in Lord of the Ocean Magic. If you get a few retriggers, your chances of filling the reels with the same symbol increases. The key is to get the higher value symbols as the expanding symbol.

In all honestly, it’s just an enhanced version of a very reputable bonus feature. You should go back to where it all began with the Book of Ra Deluxe slot, by far Novomatic’s most popular release.

Lord of the Ocean Magic FAQs

What is the Lord of the Ocean Magic RTP?

The Lord of the Ocean Magic return to player rate is 95.02% which is quite skinny and well below the average RTP rate for an online slot.

What is the Lord of the Ocean Magic max win?

Filling the reels with the high value Poseidon symbol will result in a 5,000 x stake payout per spin or free spin. Like many slots in the Novomatic catalogue, Lord of the Ocean Magic is a volatile game.

Is there a Lord of the Ocean Magic free spins feature?

Trigger the Free Games feature by landing 3+ scatters and you’ll play 10 free spins with a special expanding symbol. Additionally, a retrigger activates another expanding symbol as well as giving you extra free spins.

Is there a Lord of the Ocean Magic mobile slot?

You can play Lord of the Ocean Magic on a variety of platforms including desktop, tablet and of course, mobile. The simple 5×3 layout works well on smartphones.