From Dusk Till Dawn 10 Slot Review

Based on the violent 1996 action horror movie starring George Clooney and Quentin Tarantino as bank-robbing brothers, the From Dusk Till Dawn 10 slot is an unusual game that’s played over 2 sets of reels that combine to offer 100 paylines. You’ll find plenty of features here too. Land a fully stacked wild on the smaller set of reels and it copies onto the same reel on the big set. There’s also a streak respin bonus where you can upgrade the sticky symbol for even bigger rewards. Trigger the Bonus Wheel feature and you can win cash prizes or free spins where wilds transfer to the big reels and fill the whole reel whenever they appear on the small set. Find out more in our in-depth From Dusk Till Dawn 10 review.

Where to Play From Dusk Till Dawn 10 Slot

The From Dusk Till Dawn 10 slot is played over 2 sets of reels which, combined, offer 100 paylines. To the left is a standard 5 reel, 4 row, 25 payline machine. To the right is a colossal 5 reel, 12 row machine which offers another 75 paylines. They largely spin independently of each other. To create a winner, land 3, 4 or 5 matching symbols or wilds on a payline from left to right, starting from reel 1.

Stake levels here range from between 20p and £100 per spin. When firing up the game, you will need to select a Reality Check Interval ranging from 1 to 120 minutes. Autoplay is available with up to 100 autospins. With this comes a loss limit and the ability to stop when a single win is equal to or exceeds a chosen amount.

The From Dusk Till Dawn 10 RTP of 95.02% is a little below the norm. Despite the explosive style of the original movie, this isn’t a very volatile slot. In fact, the variance is in the low to medium range. On a scale of 1 to 5, we’d put the variance at around 2.  The maximum win is 500 x your total stake per spin. 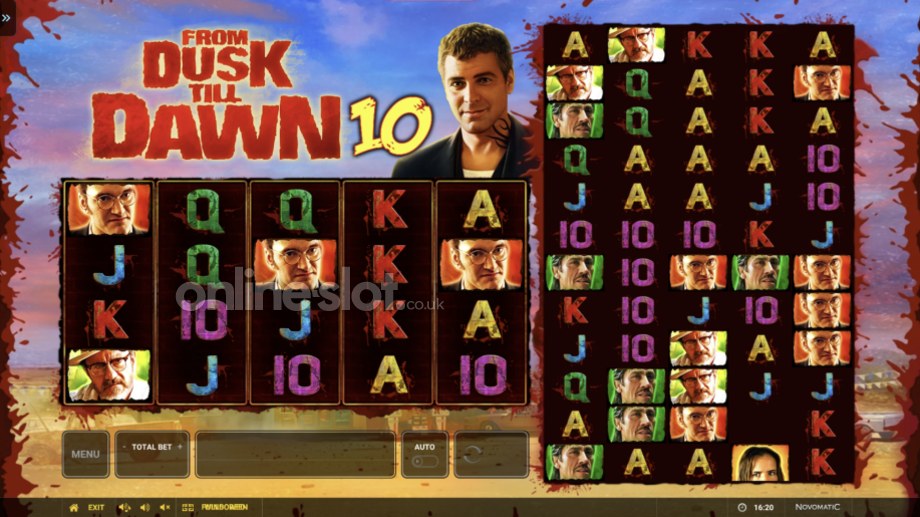 The From Dusk Till Dawn 10 slot is an official game for the From Dusk Till Dawn film. Simply designed, the action is accompanied by a guitar-heavy backing track which rocks out in the style of the movie. It’s not the flashiest slot you’ll see but it does a decent job of recreating the anarchic spirit of the original film.

On the black, blood-spattered reels you’ll see brightly coloured A to 9 royals alongside higher value characters from the film. They include Juliette Lewis, Quentin Tarantino and a very young George Clooney as Seth Gecko. Gorgeous George is the most rewarding standard symbol. Land 3, 4 or 5 on a payline for an award of 0.5, 1 or 5 x your total stake. Those aren’t big numbers. Remember there are 100 paylines here so some decent winning chances are available.

The wonderfully named Santanico Pandemonium (aka Salma Hayek) is the game’s wild. She can land on all 5 reels on both the standard and colossal sets of reels.

You can play From Dusk Till Dawn 10 on a smartphone. The colossal reels are probably better suited to playing on desktop device. This is one slot where playing on a computer is superior to playing on a mobile.

From Dusk Till Dawn 10 Bonus Features

The gameplay in this movie adaptation is a little unusual. That’s down largely to the game engine which combine to offer 10 reels (hence the name). Other feature highlights including expanding wilds which can shift to the other machine, a streak respin bonus and free spins.

The Lock & Spin feature is a variation on the streak respin that can trigger at random on any base game spin. 1 symbol is picked to be the winning symbol. Any time a winning symbol lands, it locks in position and a respin follows. The respins continue until there’s one where no new winning symbol hits.

Depending on where the pointer lands, you’ll win a cash prize or free spins. When you’ve used up your wheel spins, you’ll go on to play your accumulated free spins.

If any part of a wild lands on the main reels during the free spins, the wild transfers across to the colossal reels and fills the equivalent reel. Landing 3 or more Bonus symbols on the same spin retriggers the Bonus Wheel feature. You can spin again for more free spins or instant cash prizes.

I was slightly surprised to see Novomatic give the Gecko brothers another outing. The first slot was simply named From Dusk Till Dawn. The developer’s second slot based on the cult 90s film certainly offers something a little different thanks to the twin reels.

The other bonus features stack up pretty well too with the streak respins, free spins and copying stacked wilds offer some decent action. However, the max win of 500 x stake per spin is rather underwhelming.

If you enjoy TV inspired slots, check out our branded slots page where you’ll find the likes of Game of Thrones, Vikings and Jurassic World.

From Dusk Till Dawn 10 FAQs

What is the From Dusk Till Dawn 10 RTP?

The From Dusk Till Dawn 10 return to player rate is 95.02% which is lower than the 96% slots average. The variance is low to medium so your bankroll should last.

What is the From Dusk Till Dawn 10 max win?

The maximum win per spin is 500 x your total stake. This can be achieved by filling the reels with the high value Gorgeous George symbol.

How does the Lock & Spin feature work?

Is there a From Dusk Till Dawn 10 free spins feature?

You can land the Free Spins feature via the Bonus Wheel. The free spins come with a special wild. If any part of the wild lands on the main reels, it copies and fills the equivalent reel on the colossal reels.