Powered by Nolimit City, the Warrior Graveyard slot is the follow-up to the popular Barbarian Fury game. With 6 reels and 25 paylines, this dark and sinister themed game uses the xNudge engine. xNudge Tombstone Wilds are key to the action as the see the multiplier increase with each nudge. This applies in the 2 free spins feature. In the Death Spins feature however, the wilds are sticky for even more possible payouts. With an RTP of 96.14%, it offers 9,797 x stake wins on each spin.

Where to Play Warrior Graveyard Slot

The Warrior Graveyard slot comes with 6 reels, 3 rows and 25 fixed paylines. A winning combination is simply formed when 3, 4, 5 or 6 matching symbols appear across a payline, starting the first reel.

Catering to all players, you can spin away from 25p to £125 a spin. To change your stake, click on the dollar sign where you’ll see all available stakes conveniently on the screen. Below the spin button there’s an Autoplay button. Here, you can choose from 5 to 100 autospins. You can stop autoplay when a single win exceeds a chosen amount, of your balance is lower than 75% or 50% or if your balance is higher than 150%, 200% or 500%.

The Warrior Graveyard RTP is 96.14% which is just above the 96% slot average. 35.77% of wins will arrive in the base game with the rest coming from the various bonus features. Highly volatile (classed as 9/10 by Nolimit City), it has a hit frequency rate of 25.07% meaning just over 1 in 4 spins will give you a win. When it comes to payouts, the max win is 9,797 x your total stake per spin. 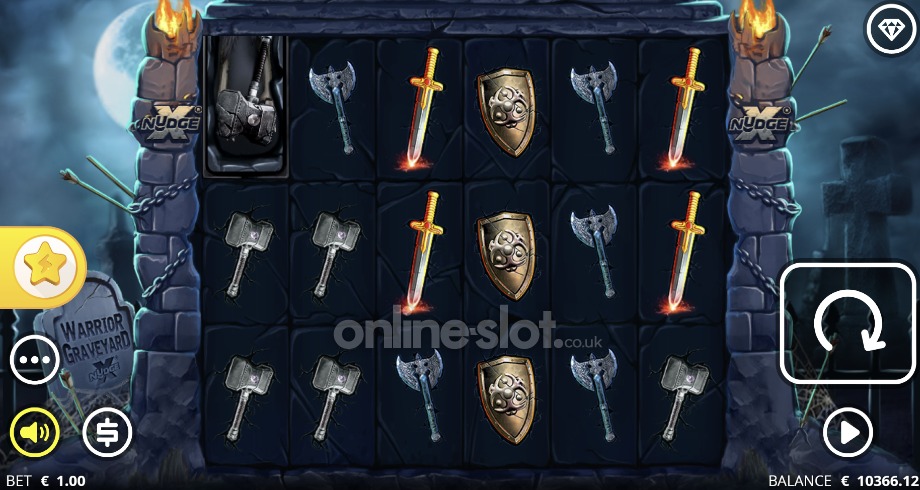 The Warrior Graveyard slot is the sequel to the popular Barbarian Fury slot game. With a more sinister feel, the setting is a cemetery where fallen heroes reside. With the reels encased within a stone grave temple, you’ll notice the rhythmic and epic soundtrack. This adds to the intensity and battle element of the slot.

Symbols all relate to the warriors. The low symbols are represented by the warriors’ weapons of choice including a hammer, axe, helmet, shield and sword. The high value symbols are the fallen warriors who appear in their coffins and also appear 3-high. The most valuable one pays 0.32, 0.72, 2.4 or 6 x your total stake for 3, 4, 5 or 6 in combination. There is also a wild/scatter symbol which pays 6 x stake for 6 on a payline.

Being a mobile-first developer, Nolimit City has created mobile, tablet and desktop versions of the Warrior Graveyard slot. The high quality graphics, animations and soundtrack work well on all devices.

The Warrior Graveyard slot focuses on the xNudge Tombstone Wilds feature which is central to most of the action. With increasing multipliers, there are 2 free spins features with 1 of them giving you sticky tombstone wilds.

Look out for a 3-row high wild symbol on reels 2, 3, 4 and 5. When appearing, the xNudge Tombstone Wilds feature is triggered. It will always nudge to become fully visible on the reel. Every nudge increases the wild multiplier by 1. You can benefit from multiple wild multipliers at the same time which sees the multiplier values added together. 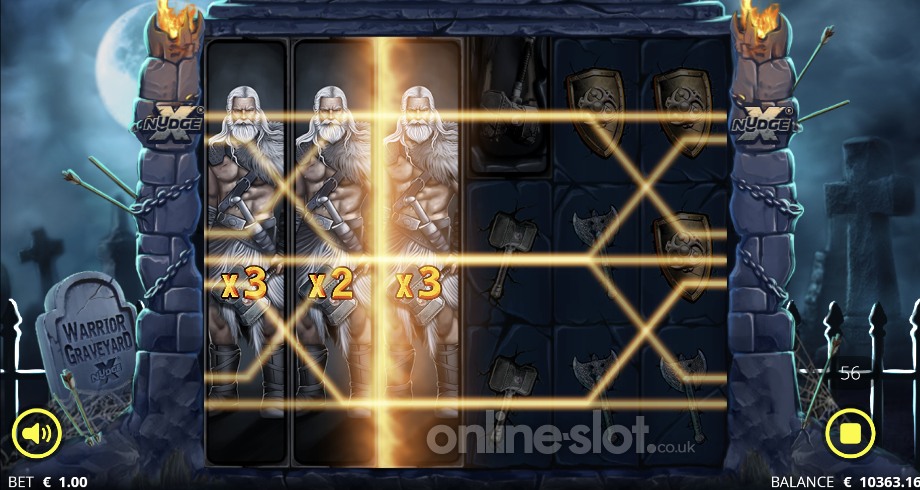 The Warrior Attack feature is activated by landing 3 or more of the same warrior symbol on the reels. The triggering symbol nudges to cover the reel and increase the multiplier on every nudge.

All symbols then move to the left and give you a payout. Tombstone xNudge wilds can appear too in order to help you win bigger. 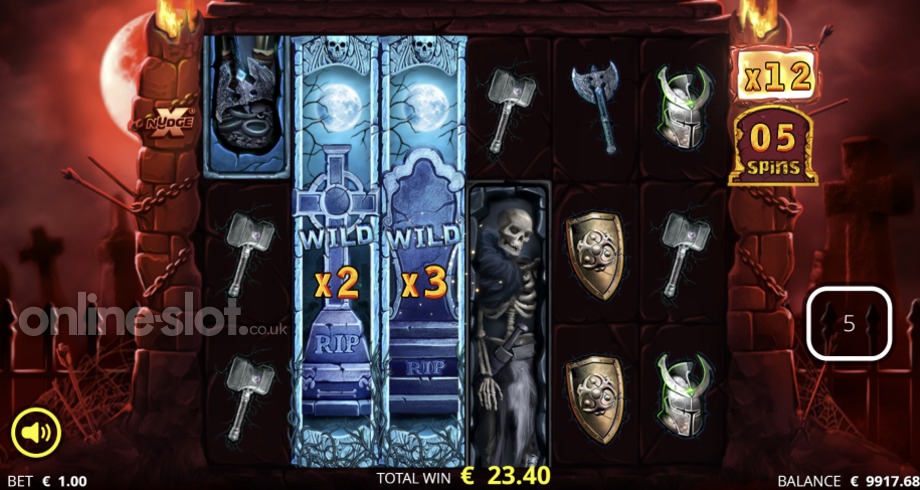 Land 3, 4 or 5 wild scatters on the reels will trigger the Graveyard Spins feature with 8, 10 or 12 free spins respectively.

The Tombstone wilds then give you an unlimited win multiplier. Beginning at 1x, every nudge sees the multiplier increase with no limits. It also doesn’t reset to 1x on a losing free spin. Finally, wild scatters landing will add another free spin to your tally. Again, with no limits.

If you land 6 wild scatters on the reels, you will enter the Death Spins feature with 14 free spins. Tombstone wilds increase the multiplier for every nudge.

However, the Tombstone wilds are sticky thus increasing your winning potential. As with the Graveyard Spins feature, a scatter appearing will give you 1 additional free spin each time.

You can buy your way into the Death Spins feature for a whopping 666 x your total stake. However, this option is not available in the UK.

The Barbarian Fury game is a popular title and for good reason. Nolimit City have created an equally good game in the Warrior Graveyard slot. The sequel looks better and has a higher win potential.

With a darker and more sinister theme, Warrior Graveyard is very intense. The soundtrack and flaming reels really bring this slot to life. It focuses on the xNudge Tombstone Wilds feature which is the key to winning big in the base game or the 2 free spins features.

The best feature is the Death Spins feature as tombstone wilds are sticky. With 0.94% of the RTP coming from this feature, don’t expect to win big here, or even trigger it at all.

In summary, Warrior Graveyard is another superb game from Nolimit City. It’s well designed, highly volatile and can give you big wins on every spin. If you want bigger win potential, the Book of Shadows slot can pay up to 30,338 x stake.

What is the Warrior Graveyard RTP?

The Warrior Graveyard return to player rate is 96.14%. Extremely volatile (9/10), it has a hit frequency of 25.07% so you’ll land a winning combination often.

What is the Warrior Graveyard max win?

The biggest possible payout is 9,797 x your total stake per spin. The key to winning big is from the xNudge Tombstone Wilds which feature in the base game and 2 free spins features.

Are there any Warrior Graveyard free spins?

Yes, you have the Graveyard Spins feature where tombstone wild nudges see the multiplier increase with no limits. You can also win additional free spins for each scatter that lands.

How does the Death Spins feature work?

Triggered by land 6 scatters, the Death Spins feature begins with 14 free spins. Like the Graveyard Spins, tombstone wilds nudge to increase the multiplier. However, tombstone wilds are sticky for bigger potential wins.