Blast into space with the Milky Ways slot, a simple, 5 reel, 243 ways to win game from Nolimit City. On any spin you could benefit from Solar Wilds which can land on the middle 3 reels and provide a multiplier boost of up to 3x. Land more than 1 Solar Wild and the multipliers are combined to up to 9x. In our detailed Milky Ways review, you’ll also find out about the Milky Way Spins feature. Once triggered, these play out on expanded reels that offer 3,125 ways to win with 2 wilds guaranteed to land on each of them. Any win in the Milky Way Spins triggers the Fusion Spins which is a streak respin feature.

Where to Play Milky Ways Slot

The Milky Ways slot game has 5 reels, 3 rows and 243 ways to win. Landing 3 or more identical symbols on adjacent reels starting from reel 1 will result in a winning combination.

You can take part in this galactic adventure at stake levels that range from between 20p and £100 per spin. Just click on the $ under the reels and choose your bet size. It’s very simple. Likewise, the autoplay. You can set up to too autospins here complete with win and loss limits. Click on the lightning bolt if you want to quicken things up and use turbo mode.

The set up in Milky Ways is nice and straightforward. There are some very decent extras as well though which can really liven up both the base game and the feature rounds.

These are special wild symbols that can land on the middle 3 reels only. These come with multipliers attached which can double or treble the payout if they form part of a winning combination.

Better still is if you manage to land more than 1 Solar Wild in the same winner as the multipliers are combined. 2x and 3x Solar Wilds deliver a 6x boost. In theory, you could land a massive 27x multiplier if you land a hat-trick of 3x Solar Wilds.

The Milky Way Spins feature is triggered by landing 3 Milky Way symbols on the same spin. It will take approximately 66 spins to trigger it. Your reward is 3 Milky Way Spins that play out on an expanded 5 reel, 5 row grid that offers 3,125 ways to win rather than the standard 243.

Each Milky Way symbol that lands adds 1 extra free spin to your total. On each Milky Way spin, you’re guaranteed to land at least 2 wilds on the middle 3 reels.

This variation on the streak respin round is triggered every time you land a winning combination in the Milky Way Spins feature. The winning symbols from the triggering spin are locked and a respin follows. A payout calculation follows each respin. These continue until no new matching symbols or wilds join a winning combination.

Milky Ways comes with a Nolimit Bonus feature where you can buy your way into the Milky Ways Spins feature. Unfortunately, this option is available to UK players. 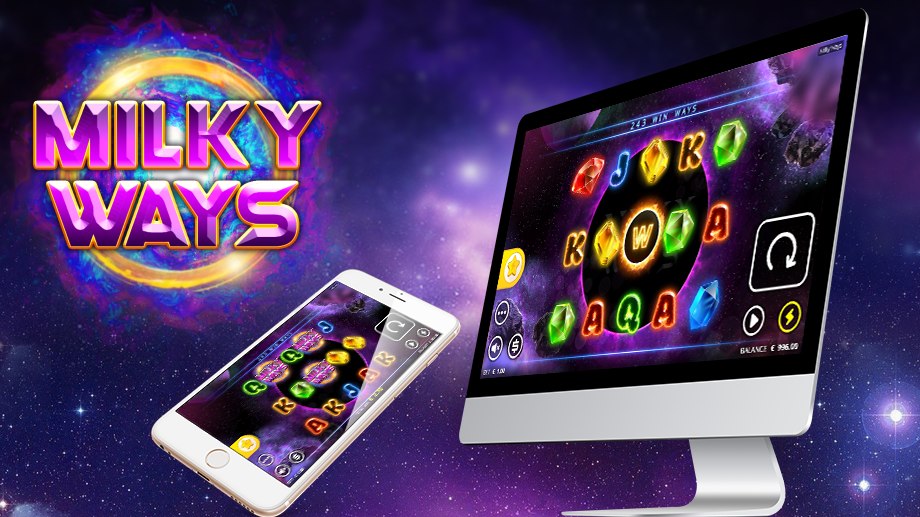 The game isn’t based on the Milky Way chocolate bar unfortunately. It’s based on outer space. Nolimit City has kept the design in Milky Ways simple. The sound and visuals combine very nicely though. With asteroids, stars and corona in the background, the brooding, sci-fi-style soundtrack fits the visuals perfectly. Yes, it’s all rather basic but it does the job perfectly well. If you don’t want to hear the full soundtrack or the effects, you can opt to mute either or both as required.

The reels are made up of brightly coloured A to J royal symbols and blue, green yellow and red gemstone symbols. They’re not the sharpest drawn jewels you’ll see but they’re lovely and sharp against the dark space backdrop.

The game interface is simple to use too. You can access the paytable and other settings from the game page. Payouts are given as cash rather than coins. The red stone is the most rewarding symbol. It pays 5 x your total stake if you land 5 on adjoining reels, starting from reel 1. That’s not a huge number but remember there are chances to boost it with the wild multipliers.

There’s nothing very complicated about Milky Ways. We liked the simplicity of design and features though. The gameplay is rather repetitive but none the worse for that. NetEnt’s Starburst slot comes to mind.

We landed the bonus features regularly and they delivered plenty of action. The biggest win opportunities come from the wild multipliers which appear in the base game and Milky spins. The Fusion Spins feature is a nice little addition to give you free respins.

We were pleasantly surprised by the Milky Ways slot. It’s might not be the most sophisticated space-themed slot you’ll play as far as design goes but it’s a playable take on a classic theme.

What is the Milky Ways slot RTP?

The Milky Ways return to play rate is 96.14%. That’s about average for a slot release. It does have a hit frequency of 33.2% which means 1 in 3 spins will result in a winning combination. Triggering the Milky Spins feature takes 66 spins on average.

What is the Milky Ways max payout?

The most you can win from the Milky Ways slot is 5,664 x your total stake. This is achieved in the Milky Way Spins feature where you’ll play with 3,125 ways to win on every spin. It’s a medium to high variance slot so don’t expect big wins often.

Where can I play the Milky Ways slot?

The Milky Ways slot can be played at casinos with Nolimit City slot games. With more and more casinos now offering their slots, you have a good selection of trusted operators to choose from. Check out the best Milky Ways casinos for UK players.

What features does Milky Ways have?

In the base game, look out for Solar Wilds that can boost payouts by 2x or 3x or combine for even bigger multipliers. There’s also a free spins round on expanded 3,125 ways to win reels. Land a winner within the Milky Way spins to trigger the Solar Spins which are streak respins that can deliver even bigger rewards. See the Milky Ways bonus features section for more details.