Recreating the famous rap battles of the 1990s, the East Coast vs West Coast slot is a retro flavoured hip hop-themed game from Nolimit City. There’s plenty going on in this super volatile 5 reel, 243 ways to win title. Highlights include respins and free spins where your winning chances are boosted via Enhancer features. These can deliver expanded reels, nudging wilds which increase multipliers, multiplied symbols, linked reels and expanded symbols. With up to 84,375 ways to win, max wins can reach 30,618 x your total stake. Find out more in our detailed East Coast vs West Coast review.

The base game action in the East Coast vs West Coast slot plays out on a 5 reel, 3 row, 243 ways to win machine. The number of ways to win can rocket up to a maximum of 84,375 courtesy of the expanding reels which we’ll look at shortly. To create a winner, you need to land 3 or more of the same symbol or wild on adjoining reels starting from reel 1.

You can join this rap battle at stake levels of between 20p and £100 per spin. To adjust, click on the $ symbol below the reels. For autoplay, click on the arrow below the spin button. You can run up to 100 spins here. There are options to set win and loss limits too.

The East Coast vs West Coast RTP is 96.04%. This can rise to 96.89% with the Bonus Buy options (more info below). The hit frequency rate of 30.27% means you’ll land a winner on just under one third of spins on average.

The design might be pretty laid back but that’s certainly not the case when it comes to variance. The volatility is extremely high. Out of 10, it’s a maximum 10. The max win is 30,618 x your total stake per spin. 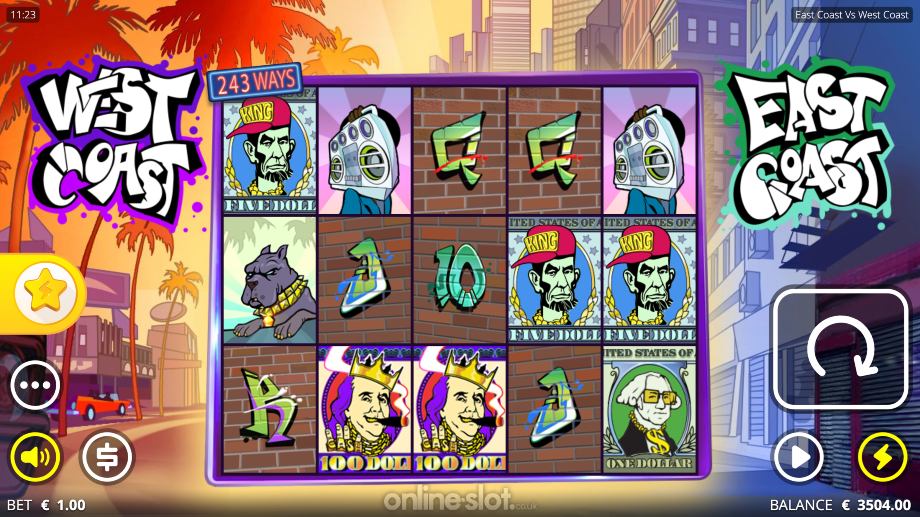 The design is done graffiti-style and is impressive as usual from developer Nolimit City. The reels are set against a backdrop of the sun kissed palm trees of California and the gritty high rises of New York. You’ll hear a beat heavy soundtrack playing while you spin, punctuated by blaring sirens. The overall effect is pretty superb.

On the reels you’ll find graffiti A to 10 symbols alongside a ghetto blaster, a dog and a trio of dollar bills featuring the images of George Washington, Abraham Lincoln and Benjamin Franklin smoking a blunt. The Benjamin Franklin symbol has the highest value and pays 1.5, 2.5 or 7.5 x your total stake if you land 3, 4 or 5 in combination.

There is also a gold ring wild symbol which substitutes for any symbol except the bonus scatter. Here’s a list of payouts per symbol:

You can expect plenty of variety from the features on offer in East Coast vs West Coast. There are respins and free spins aplenty, complete with a variety of enhancers which can really rev up the action. 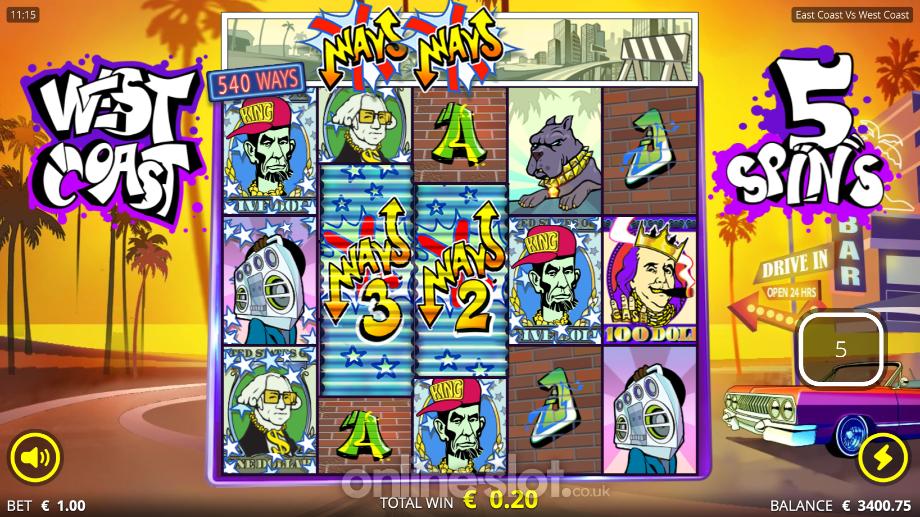 The Drive By Respin feature is triggered by landing 2 bonus scatter symbols on the same spin. You’ll then play 1 respin where one of the enhancers will be active (described above). 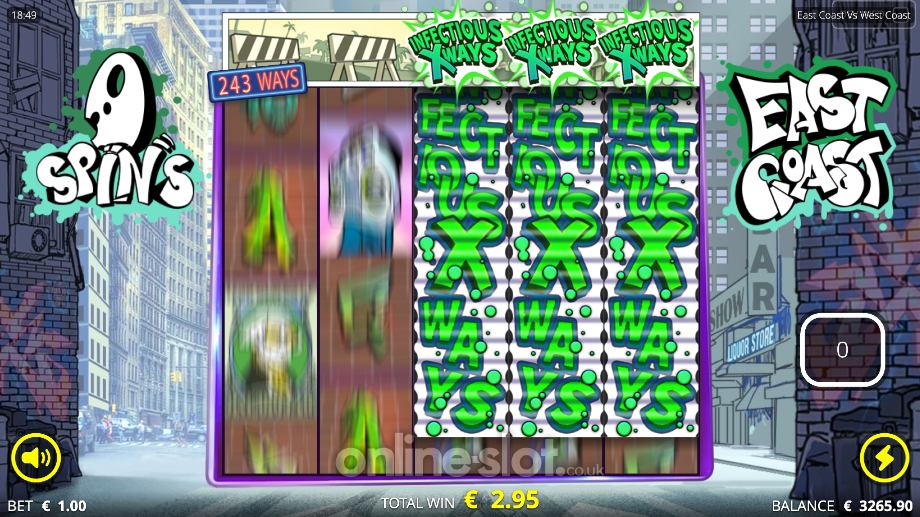 Land 3 or 4 Bonus symbols and you’ll receive 8 or 10 free spins in the East Coast Spins feature. In this round, an Infectious X-Way symbol is guaranteed to land on each free spin.

Above the reels is a bar. This shows what other Enhancers can trigger. Some of them will be locked. Land a Bonus symbol to add 2 more free spins as well as unlocking an Enhancer. If you manage to unlock all 5 Enhancers, you’ll head to the Coast to Coast Spins feature which we’ll look at below. This feature has a higher risk than the West Coast option as well as higher win potential. 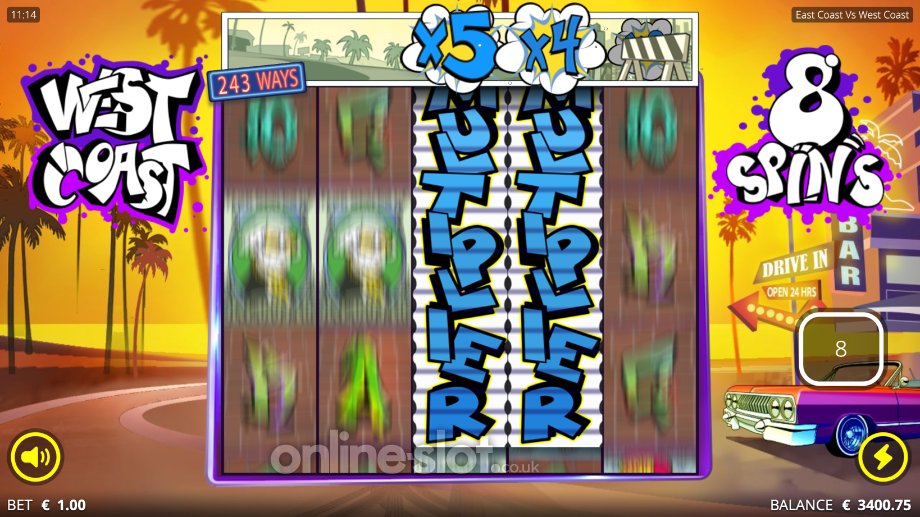 The Coast to Coast Spins feature can be triggered from the other 2 free spins features. You can also activate it by landing 5 Bonus symbols. You’ll then play 5 free spins with 2 Enhancers landing simultaneously on each of them. This increases your win potential as you’ll benefit from double the number of enhancers on every free spin.

Like in other Nolimit City slots, there are 2 feature buy options in East Coast vs West Coast. Either option will give you 8 East/West Coast Spins or 12 Coast to Coast Spins. Here’s what they offer:

East Coast vs West Coast Review Summary – which side you on?

The East Coast vs West Coast slot offers plenty of variety thanks to the Enhancers. It can pack a proper payout punch too courtesy of max wins of 30,618 x stake. Take care though as the action here is extremely volatile.

With up to 84,375 ways to win, the key to the big wins will come from an increased number of ways to win as well as the multipliers. The best feature is the Coast to Coast Spins feature where 2 enhancers are in play on each free spin.

Even if you don’t know your rappers, or your Snoop Dogg from your Kool G, the range of extras make East Coast vs West Coast worth a spin. It doesn’t offer the max wins than the San Quentin slot does but it’s a superb game yet again from Nolimit City.

There are a few hip hop themed slots out there. None offer the max win potential, the unique design and range of bonus features than East Coast vs West Coast does. In summary, another superb game from Nolimit City.

What is the East Coast vs West Coast RTP?

What is the East Coast vs West Coast max win?

The most you can win is 30,618 x your total stake. Highly volatile, the key to big wins is from the multipliers and increasing ways to win, up to 84,375.

Are there any East Coast vs West Coast free spins?

Yes, you have the choice of East Coast or West Coast Spins. These come with a range of Enhancer features which deliver synced reels, multipliers, expanding and morphing symbols. The ways to win can reach 84,375.

How does the Coast to Coast Spins feature work?

Is there an East Coast vs West Coast demo?

Yes, you can play the East Coast vs West Coast free play version here at Online-Slot.co.uk. Produced using HTML5 technology, you can try this hip-hop themed slot on desktop, mobile and tablet devices.