Based on the noble Japanese warrior class, the Bushido Ways slot is a superbly designed and feature-filled game from Nolimit City. The action starts on 5 reels and 1,024 ways to win but can expand to offer up to 12,288 ways to win. Look out for the wild Geisha who can land on reel 3. If any part of her appears, she nudges to turn the whole reel wild. Other highlights include transforming symbols, wilds that can slice so they’re the equivalent of 2, 3 or 4 wilds. There are also 2 free spins features which come with extra wilds or sticky multipliers. With 30,000 x stake max wins, find out more in our full Bushido Ways review.

Where to Play Bushido Ways Slot

The Bushido Ways slot is initially played using 5 reels, 4 rows and 1,024 ways to win. The game mechanic means that this can increase massively, offering 24,576 ways to win, if the reels reach their maximum configuration courtesy of the nudges and slicing wilds. To create a winning combination, you need to land 3 or more matching symbols or wilds on adjacent reels, starting from reel 1.

You can join the warriors at stake levels that range from 20p to £100 per spin. Click on the Dollar sign to view all available bet levels (there are 25 to choose from). In some countries, there’s an Autoplay function where between 5 and 100 autospins can be selected. These come with single win and balance limits.

Variance wise, it’s very high and rated as 9/10 (extreme) by developer Nolimit City. The potential maximum win is a massive 30,000 x your total stake from a single spin. 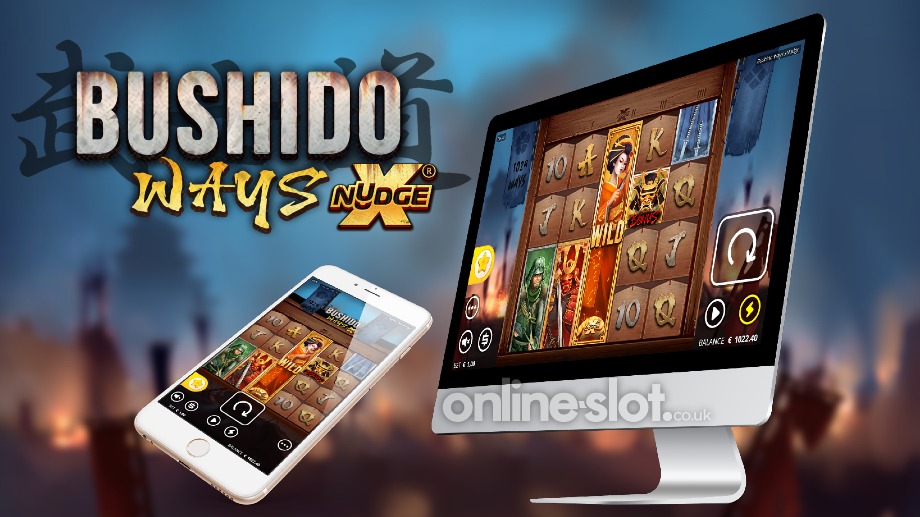 The Bushido Ways slot is set in Japan and based on the infamous warriors. The Bushido was a moral code adopted by Japanese Samurai warriors. Its core tenets involve honour, respect, tribute, glory, fear and revenge. It’s a bit like the codes of chivalry associated with European knights from the Middle Ages.

The Samurai warriors are central to the design here. As you’d expect, there’s a strong hint of historical Japan. Combine the impressive visuals with the traditional Japanese soundtrack and you have a slot that’s very atmospheric and sounds like it’s from a blockbuster film. As always, it’s impressive from Nolimit City as usual.

On the wooden-style reels you’ll see Asian A to 10 symbols alongside higher value Samurais who can land in stacked formation. They’re all very well drawn and packed full of detail. The red Samurai is the most valuable symbol and pays 2 x your total stake for 5 in combination.

Maintaining the Japanese theme is the Geisha which is a nudging wild that can land on the middle reel only. There’s also a single wild symbol and a Bonus.

Bushido Ways xNudge is available to play on mobiles, tablets and desktop devices. You’ll find the high-class design and wide variety of features no matter what you’re playing on. The Bushido Ways mobile slot plays superbly. 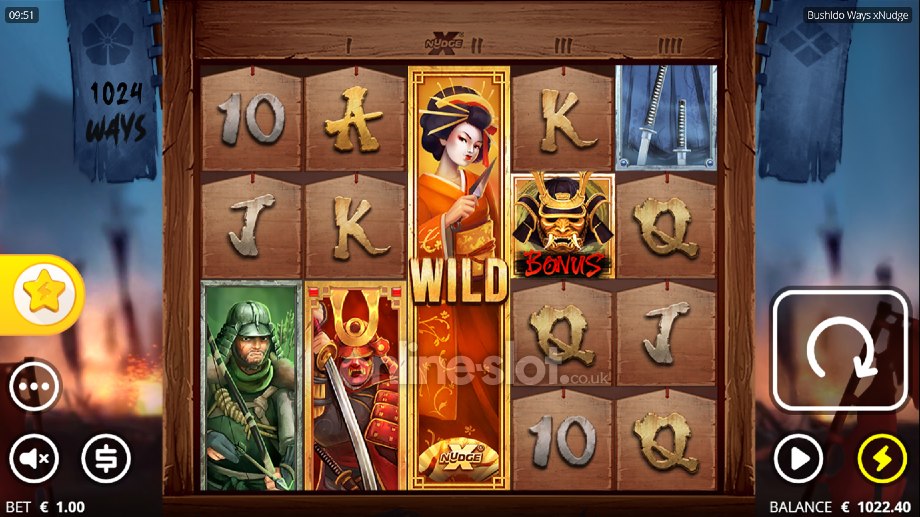 As her name suggests, the Geisha symbol is wild. She spins in 4-high stacks and can appear on reel 3 only. When she does land on that middle reel, she triggers The Wild Geisha feature. The Geisha nudges so that the whole of the reels turns wild. For every step the wild nudges, a multiplier increases by 1x.

The single-symbol wilds can land anywhere apart from reel 1. If you land a single wild on reel 3, 4 or 5, you bring the Sliced Wilds feature into play:

Now, the sliced wilds will also increase the number of ways to win. If reels 1 and 5 have 4 symbols, reels 2, 3 and 4 can have 6, 8 and 16 symbols meaning 12,288 ways to win potentially (4x6x8x16x4). Land the sliced wilds in the free spins features and they copy down to the bottom of the reel before the slice occurs.

During this feature, at least 1 single wild is guaranteed to land on reels 2, 3, 4 or 5 on each free spin. Land a stacked Geisha Wild in this feature and you’ll be upgraded to the Geisha Spins feature. 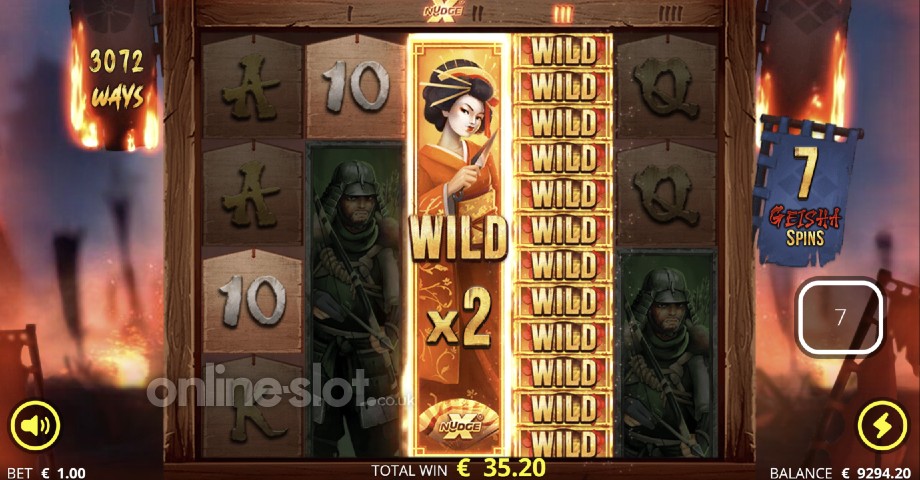 Trigger the Geisha Spins feature via the Shogun Spins feature or by landing 3 Bonus symbols and a stacked Geisha wild on the same base game spin. Once again, 8 free spins are awarded.

For each nudge the Geisha Wild does, a sticky multiplier is brought into play, up to 4x. Extra free spins equal to the value of the multiplier are also awarded. Landing a Bonus symbol here adds 1 extra Geisha Spin to your tally. On each Geisha Spin, a single wild is guaranteed to land on reels 2, 4 or 5.

In some territories, players will have the chance to buy 1 of 2 free spins features. Known as the Nolimit City Bonus feature, the RTP also increases with each feature. Here are your options:

Bushido Ways Review Summary – learn the way of the warrior

The Bushido Ways slot is a beautifully designed game. With a lot of variety on offer, the bonus features offer something different to what we’ve already seen in other Nolimit City slots.

Key to big wins is the Sliced Wilds feature which can increase the number of ways to win to 12,288. This applies in the base game as well as in the 2 free spins features.

Of the 2 free spins features, the Geisha Spins feature is where the best action will come from. The sticky multiplier up to 4x will land you huge wins hopefully with a 30,000 x stake max win available (known as The Journey’s End). The chances of winning this amount is 1 in 45 million though.

The XNudge mechanic can be found in other slots like Deadwood. Bushido Ways has many some similarities as it also comes with multiple free spins features. The latter offers bigger win potential but is simpler in terms of gameplay.

Overall, Bushido Ways xNudge is another superb release from Nolimit City. It doesn’t match up to San Quentin in my opinion but not many slots come close either.

What is the Bushido Ways RTP?

What is the Bushido Ways max win?

The most you can win from a single spin in Bushido Ways xNudge is 30,000 x your total stake. Known as The Journey’s End, the key to big wins is from the sticky multiplier wild in the Geisha Spins feature.

How does the Sliced Wilds feature work?

Are there any Bushido Ways free spins?

Yes, there are 2. The Shogun Spins feature sees 1 guaranteed wild land on each free spin. Land a stacked Geisha wild here to play the Geisha Spins feature. Here, a sticky multiplier up to 4x is in play.