Prizes of up to 38,000 x stake are the main attraction in the Twin Spin Megaways slot, an updated version of the original classic Twin Spin from NetEnt. This suped up sequel combines elements of the original but revs up the action with a Megaways game engine that offers up to 117,649 ways to win.  Other highlights include Avalanche Reels and Twin Reels which join to show the same matching combination of symbols. Trigger the Free Spins feature and you can look forward to unlimited free spins. Boosting your winning opportunities here are wild multipliers that can double or treble your award. Find out all you need to know in our detailed Twin Spin Megaways review.

The Twin Spin Megaways slot is played on a 6 reel machine where the number of active Megaways can reach up to 117,649. Each reel can be made up of anywhere between 2 and 7 symbols on each spin. The more symbols on display, the larger the number of Megaways active. If all 6 reel have the maximum 7 symbols, you’ll have 117,649 ways to create a winner on that spin. Land matching symbols on 3 or more adjoining reels, starting from reel 1 to create a winner.

Stake levels here range from between 10p and £200 per spin. Click on the coins below the reels and set your level. You can run between 10 and 1,000 autospins if required. Click on the advanced settings to set win and stop loss limits. You can also end autoplay when you trigger the free spins.  There’s a turbo spin mode available too.

The Twin Spin Megaways RTP is 96.04% which is about average. We found the volatility here to be pretty high. That’s matched by the potential maximum win which stands at a massive 38,000 x stake per spin. 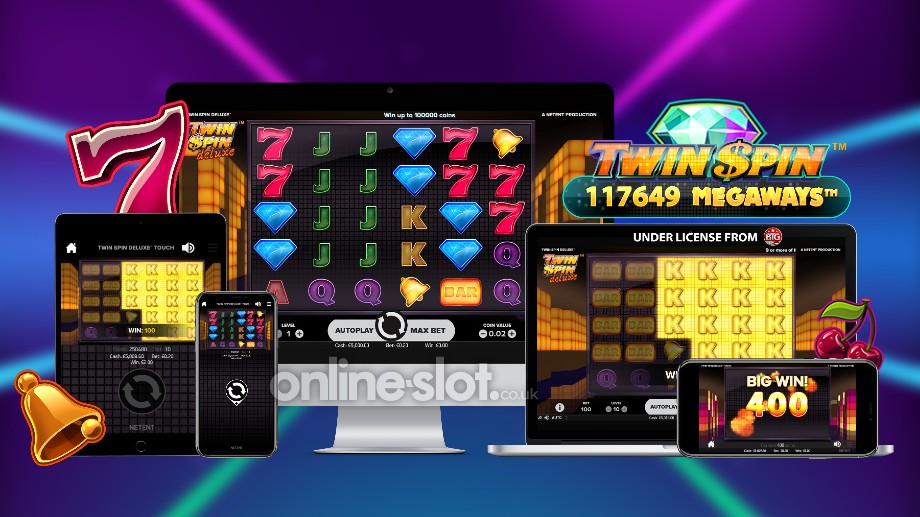 The design in the Twin Spin Megaways slot is similar to the original Twin Spin slot. It has a classic Las Vegas feel with a modern twist. The visuals here are clean and sharp.

If the soundtrack sounds familiar it should be. It’s exactly the same one that plays in the original Twin Spin and sounds like it could have come straight from a TV gameshow. The design here is rather understated but it does the job perfectly well.

The plain black reels are made up of a collection of classic fruit machine symbols. They include A to 9 royals as well as cherries, a bell, a bar and a lucky 7. The diamond tops the payouts, delivering 2, 3, 6 or 10 x your total stake if you land 3, 4, 5 or 6 in combination.

Like all NetEnt slots, you can play Twin Spin Megaways on all devices including desktop, tablet and mobile. The neat, clean visuals stand out nicely on the smaller devices. There are plenty of moving parts here given the Avalanche feature and Megaways mechanic but the Twin Spin Megaways mobile slot comes together very nicely.

NetEnt has taken elements that made the original Twin Spin slot such a hit and added a new dimension to the gameplay via the Megaways game mechanic. You’ll find the usual twin reels in this version as well as Avalanche spins and a free spins round complete with wild multipliers.

Land a winning combination and the Avalanche feature comes into play. Successful symbols are blasted off the grid and new symbols drop in and replace them.

If these new symbols create a new winner, a payout is made and the process is repeated with another Avalanche following. The avalanches keep on coming until no new winning combination is formed. The Avalanche feature has been used in many NetEnt games and also by Megaways’ developer Big Time Gaming (known as Reactions or Cascading Reels). 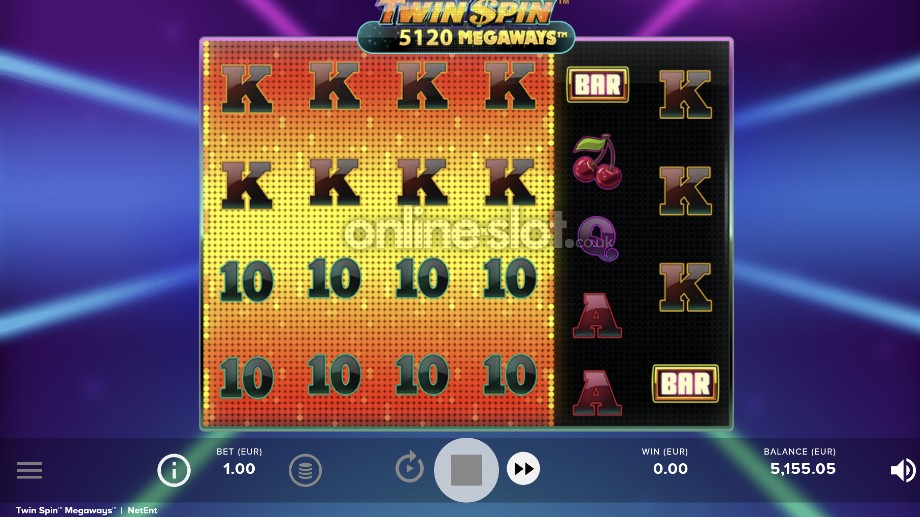 On each spin, at least 2 but possibly more adjacent reels are twinned. Known as the Twin Reel feature, these linked reels will be made up of the exact same combination of symbols.

If you were to get 5 twinned reels, all 5 reels would display identical symbols. This can really boost you chances of forming a winning combination. If you do get a win, the Avalanche feature is triggered with new symbols replacing the winning ones.

To trigger the Free Spins feature, you’ll need to land 5 scatter symbols anywhere on the reels on the same spin. You’ll then go on to play 15 free spins. You’ll get an extra free spin for every additional scatter appearing on the triggering spin.

Joining the action here are wild multipliers which can appear anywhere apart from reel 1. These 2x and 3x multipliers can double or even treble payouts. These can really come into their own when the multiplier wild forms part of a set of Twinned Reels.

The Twin Reels will always be the maximum 7 symbols high which also boost the potential number of Megaways that are active. If you get 5 twinned reels, you’ll play with the maximum number of 117,649 Megaways.

The Twin Spin Megaways slot version is better than the original as it keeps the elements that made the original such a hit and adding an extra level of gameplay in the form of the Megaways game mechanic.

The imagery is super sharp and the soundtrack will have you humming along (whether you like it or not). This slot can pack a big payout punch too with awards of 38,000 x stake payouts possible. If you enjoyed the original Twin Spin slot, you should find more than enough to keep you entertained in this very playable sequel.

How does it rate compared to other Megaways slot games? It’s simple and to the point which some players will appreciate. Despite there being nothing revolutionary, it offers big potential wins with bonus features you’re used to.

What is the Twin Spin Megaways RTP?

The Twin Spin Megaways return to player rate is 96.04% which is below the average for a Megaways slot. However, it does offer big win potential.

What is the Twin Spin Megaways maximum win?

The most you can win from a single spin in Twin Spin Megaways is a massive 38,000 x your total stake. The likeliest way to win big is from the wild multipliers in the free spins.

Are they are Twin Spin Megaways free spins?

Yes. The Free Spins feature begins with at least 15 free spins. With unlimited retriggers, there are wild multipliers up to 3x landing on 5/6 reels. With the Twin Reel feature active, Twin Reels will have 7 symbols each.

What is the Twin Reel feature?

The central plank of Twin Spin Megaways is the Twin Reel feature. On each spin, 2-5 adjacent reels will link and display the same combination of symbols. In the free spins, every twinned reel will display 7 symbols giving you more Megaways.