The Super Striker slot is a 3 reel, 5 payline game powered by NetEnt. With a football theme, you can play from just 10p a spin on all devices. It offers a multi-level Free Spins feature and the Golden Multiplier feature where multipliers can reach 10x. Then there’s the Bet Slip feature where you predict the frequency of a symbol landing in a number of spins to win a multiplier up to 815x stake.

Where to Play Super Striker Slot

The Super Striker slot comes with 3 bonus features. There’s the Free Spins feature where you start with 3 free spins. Each golden football scatter resets the free spins tally. They also come with stake multipliers – if you fill the reels with them, you’ll win the combined prizes. If you collect enough, you’ll move to the next level. The Golden Multiplier feature then applies which can go up to 10x. There’s a Bet Slip feature where is about predicting the frequency of symbols appearing in a certain number of spins for a multiplier prize. 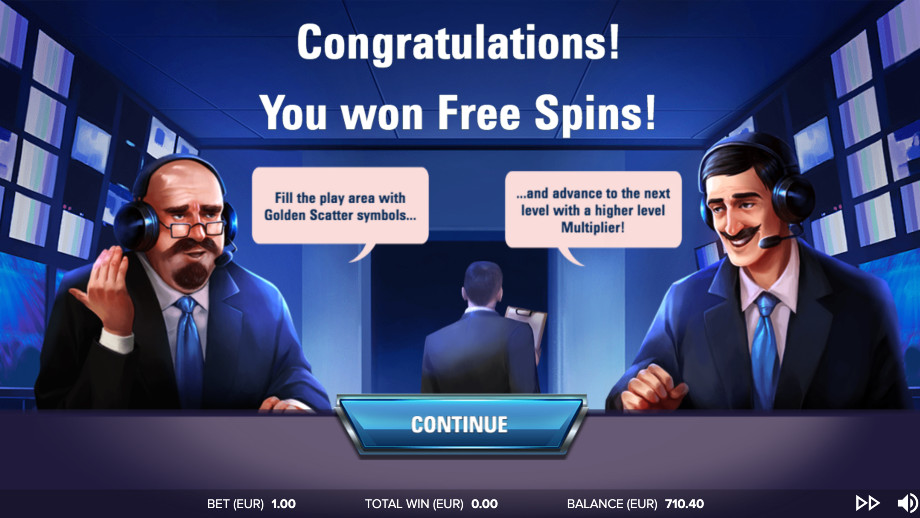 Super Striker comes with a Free Spins feature. This is played when you get 3 football scatter symbols or 1 golden football scatter and 2 football scatters landing anywhere on the reels in the base game. You will begin with 3 free spins. Here, there are 5 different levels with an increasing multiplier.

Each time you advance a level, you will win a sum equal to all multipliers from the golden football scatters. This amount is also subject to the multiplier for that particular level – this is known as the Golden Multiplier feature. Here are the multipliers each level offers:

There’s also the Bet Slip feature which was first used in the Scudamore’s Super Stakes slot (from NetEnt). To initiate the feature, click on the Bet Slip to the side of the reels. Basically, the Bet Slip allows you to bet on the number of times a particular symbol lands within a designated number of spins. Here’s what you need to do:

If you were to choose a low value symbol, you will need more of them to win the amount shown in the Bet Slip. This is because, in theory, this symbol will appear more often. Choosing a high value symbol is much more lucrative but a lot harder to land.

If you chose the highest value symbol, the Golden striker, these would be your options:

If you use the Bet Slip feature, it’s worth noting that the RTP increases depending on which bet is chosen – it will rise to between 96.06% to 96.93%.

Super Striker is played on a 3×3 grid with just the 5 paylines. You can play the Super Striker slot from 10p to £75 per spin. If you want to play using the Autoplay function, you can select from 10 to 1,000 spins. There are also advanced settings where you can stop the autoplay on any win, if a single win amount is achieved or if your balance goes up/down by a chosen amount.

In terms of variance, the Super Striker online slot is high – this means plenty of little wins throughout the game. The bigger wins will come from the Golden Multiplier feature in the free spins. The max win is 5,000 x your stake which is high for a football themed slot.

The Super Striker RTP is 96.04% – which is average for an online slot. If you use the Bet Slip feature, the RTP increases between 96.06% and 96.93% depending on which symbol you choose and how many spins you need to get the number of symbols. 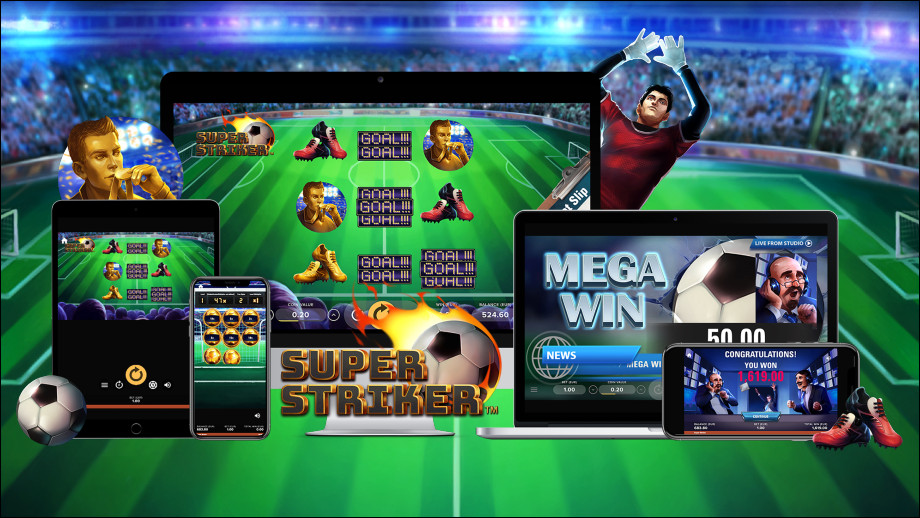 The Super Striker slot is a football themed game released in time for the Euro 2020 tournament. With cartoon style graphics, you’ll see a football pitch in the background. It has a retro feel graphically. The soundtrack is rather odd as you’ll hear hallowing crowds cheering.

With the symbols floating on the reels, you’ll see Goal, double Goal and treble Goal symbols on the reels. There are also red football boots, golden football boots, a super striker and a golden player kissing a medal. The latter is the most rewarding symbol as 3 on a payline will give you 100 x your stake – the next most valuable symbol is the super striker who pays 10 x your stake (for 3 on a payline).

You can play Super Striker on desktop, mobile and tablet devices. Well, as long as your device uses an iOS, Android or Windows operating system. The simple graphics and animations work well on smartphone screens so you don’t miss out on any of the action.

The Super Striker slot is not the best game to look at – NetEnt could have done a bit more graphically truth be told. However, the Free Spins feature has the potential to pay out up to 5,000 x your stake on each free spin due to the 10x multiplier in level 5.

The Bet Slip feature has been seen before but the max win is 815 x stake which isn’t worth the hassle in my opinion. Most of the time, you won’t get the number of symbols you opt for, especially if it’s a higher value symbol.

Most football themed slots are quite bland – Super Striker is better than most of them though. However, the Bicicleta slot by Yggdrasil Gaming has more to offer.

❓ Can I play Super Striker for free?

You can try the Super Striker slot for free here at Online-Slot.co.uk – in fact, there’s over 3,000 online slots to play and read about.

? What is the Super Striker RTP?

The most you can win from the Super Striker slot is 5,000 x your stake – this can be achieved in the Free Spins feature with the potential 10x multiplier.

⚡ Is there a Super Striker mobile slot?

Super Striker can be enjoyed on mobile devices – you can also play the game on desktop and tablet devices. The simple reel layout transfers well to smaller sized screens so it’s perfect to play on the go.