The Hall of Gods slot is by NetEnt and has 5 reels and 20 paylines. Playable from 20p a spin on all devices, this Norse mythology themed game is a progressive jackpot slot offering 3 jackpots. There are also expanding wilds, free spins with trebling multipliers and a picks feature where cash prizes are up for grabs. The RTP is 95.7% and offers wins of 4,314 x stake per free spin. It offers an average jackpot of €5.3 million and has paid out up to €7.7 million.

Where to Play Hall of Gods Slot

The Hall of Gods jackpot slot takes place on 5 reels, 3 rows and 20 fixed paylines. A win is created when 3, 4 or 5 matching symbols land across on any of the paylines, beginning from the leftmost reel. For the 4 Norse Gods, you only 2 matching symbols on a payline to get a win.

You can spin away from 20p to £50 per spin catering to all players. There’s an Autoplay option where you can choose from 10 to 1,000 autospins. If you click on Advanced Settings, you can stop the autoplay on any win, if you trigger the Free Spins or Pick Win features if a single win exceeds a chosen amount or if you balance increases/decreases by a chosen amount. You can also implement the Quick Spin mode to spin the reels faster.

Most of your wins will come in the base game with the bigger wins coming in the Free Spins feature and Pick Win feature. The max win is 4,314 x stake from each free spin (with the 3x multiplier). The most you can win from a base game spin is 1,438 x stake. You can win a lot more from the progressive jackpots: check out the list of Hall of Gods jackpot winners below. 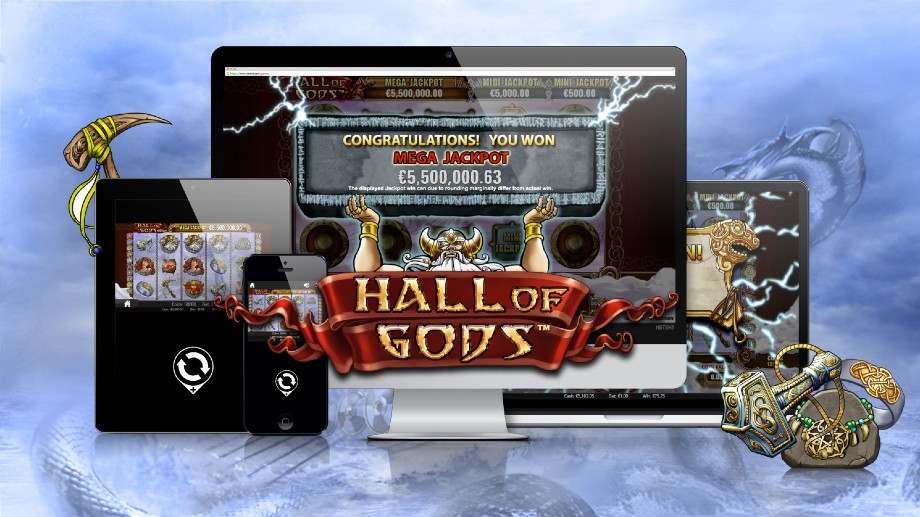 The Hall of Gods slot has a Norse mythology theme as you join Norse gods on the reels. Released in 2010, it looks dated graphically but it adds to the charm in some ways, in my opinion. Set in the skies and with clouds in the backdrop, the soundtrack is that of a live casino slot.

The low value symbols are represented by chests full of apples, axes, necklaces, hammers (Thor’s presumably) and rings. Norse gods Idun, Loki, Freya, Thor and Odin also appear on the reels. Odin is the highest value god as he pays 0.5, 2.5, 7.5 or 200 x your total stake for 2, 3, 4 or 5 across a payline. There is a Midgard Serpent wild symbol which appears on the 3 middle reels and performs the usual substituting duties.

NetEnt has revamped many of their older releases but the Hall of Gods slot hasn’t had a facelift. What has happened is that it’s been remade using HTML5 technology meaning it can be played on mobile and tablet devices (as well as desktop). The simple graphics and animations work well on smaller screens.

The Hall of Gods slot offers you 3 bonus features. You have an expanding Midgard serpent wild symbol on the 3 middle reels and a Free Spins feature where you can win up to 40 free spins with all payouts trebled. With a Pick Win feature where you win cash prizes, you can also win 1 of 3 progressive jackpots. 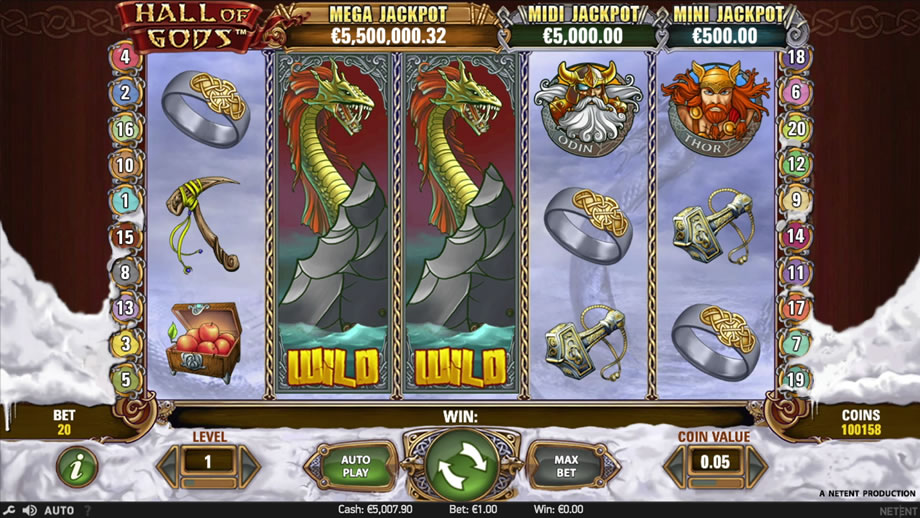 Hall of Gods comes with a Midgard Serpent symbol which is the wild. Appearing on reels 2, 3 and 4 (the 3 middle ones), it substitutes for all symbols except the scatter and bonus features. When the wild lands, it will trigger the Expanding Wild feature.

The wild then expands to reward you with a fully wild reel. The Midgard Serpent wild symbol can appear simultaneously on all 3 middle reels leading to 3 fully wild reels.

Then you have the Free Spins feature which you can activate by obtaining 3 or more Odin’s Raven symbols (scatters). The more scatters you land, you more free spins you’ll play with:

Once in, all free spins come with a 3x multiplier meaning that all wins are trebled. If you get 3 or more Odin’s Raven symbols you will get more free spins. This can lead to 40 free spins in total. The Expanding Wild feature applies here too meaning you could play with 3 wild reels on every free spin. 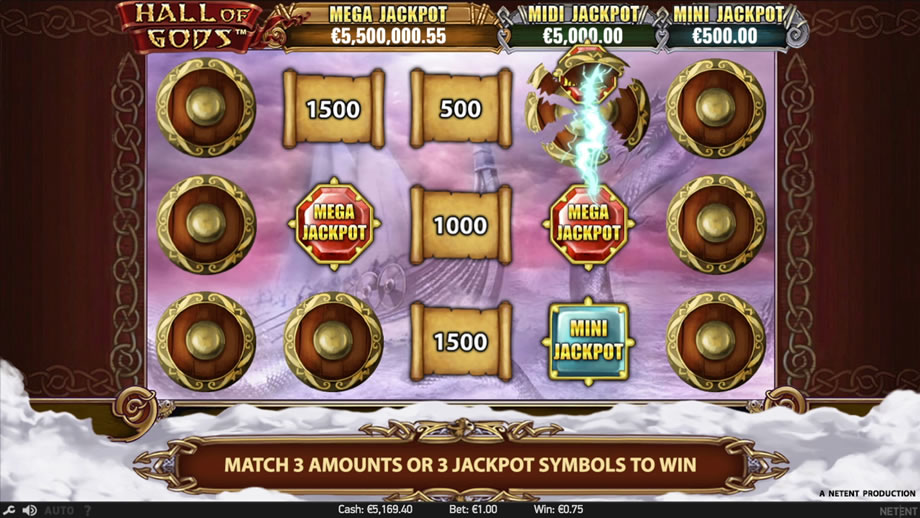 Finally, Hall of Gods has a Pick Win feature. This is the most appealing on the 3 features. It is triggered by obtaining 3 Thor’s Hammer symbols anywhere across the reels. This is the feature where you can win 1 of 3 progressive jackpots.

Anyway, use Thor’s Hammer to break the shields on the screen. Match 3 amounts and you will win it. You can also uncover 3 jackpots with 2 of them being local jackpots and 1 of them being progressive:

Since Hall of Gods was released way back in 2010, the slot has paid out over €90 million in jackpots. The largest single win was nearly €7.8 million in April 2015. It offers an average jackpot of €5.3 million which is won every 160 days on average.

The Hall of Gods jackpot slot may have been released in 2010 but it remains 1 of NetEnt’s most popular slots. It may not be much to look at but it some serious win potential throughout.

With an RTP of 95.7% (which is decent for a jackpot game), you can win up to 4,314 x stake on every free spin (with the 3x multiplier) which is good in terms of normal slots go.

Add in the jackpot element and you can see why Hall of Gods is a popular choice amongst slot players. The dated graphics and animations add to the charm for an experience not commonly found online anymore.

If you’re after progressive jackpots, Mega Fortune (by NetEnt) or Mega Moolah (by Microgaming) offer the biggest amounts available online.

Not all online casinos offer the Hall of Gods jackpot game. The bigger sites have it meaning more player try their luck and increase the Mega Jackpot into the millions. Check out the top Hall of Gods sites which have other NetEnt jackpot slots like Mega Fortune and Arabian Nights.

How do I win the Hall of Gods jackpot?

The 3 jackpots can be won via the Pick Win feature. You then use Thor’s hammer to smash shields. Match 3 amounts to win cash prizes or 3 jackpots. The Mega Jackpot is progressive and begins at £500,000.

What is the biggest Hall of Gods jackpot won?

With over €90 million paid since it was released, Hall of Gods paid out €7,788,882 in April 2015. With an average jackpot of €5.3 million, check out the jackpot winners section for more details.

Are there any Hall of Gods free spins?

Yes, the Free Spins feature gives you up to 40 free spins with a 3x multiplier. With up to 3 wild reels per free spin possible, you can win up to 4,314 x stake on every free spin.

The Hall of Gods RTP is 95.7% which is pretty good for a progressive jackpot slot. With a hit frequency of over 37%, you’ll get plenty of wins. The bigger wins come from the 3x multiplier in the free spins and the 3 progressive jackpots.