The Gordon Ramsay: Hell’s Kitchen slot comes with 5 reels, 3 rows and 20 fixed paylines. Land a winning combination with 3, 4 or 5 matching symbols on a payline. The symbols need to start from reel 1 and go across adjacent reels (i.e. matching symbols on reels 1, 2 and 3).

Feel the heat of the kitchen from 20p to £400 a spin. With a Quick Spin setting for faster spins, you will find the usual Autoplay function where between 10 and 1,000 autospins can be selected. In advanced settings, you have single win and balance limits if you wish.

The Gordon Ramsay: Hell’s Kitchen RTP is 96.07% which is just above the 96% average. The variance is in the low to medium range. However, the hit frequency is not yet known but the max win is 1,000 x your total stake per free spin. 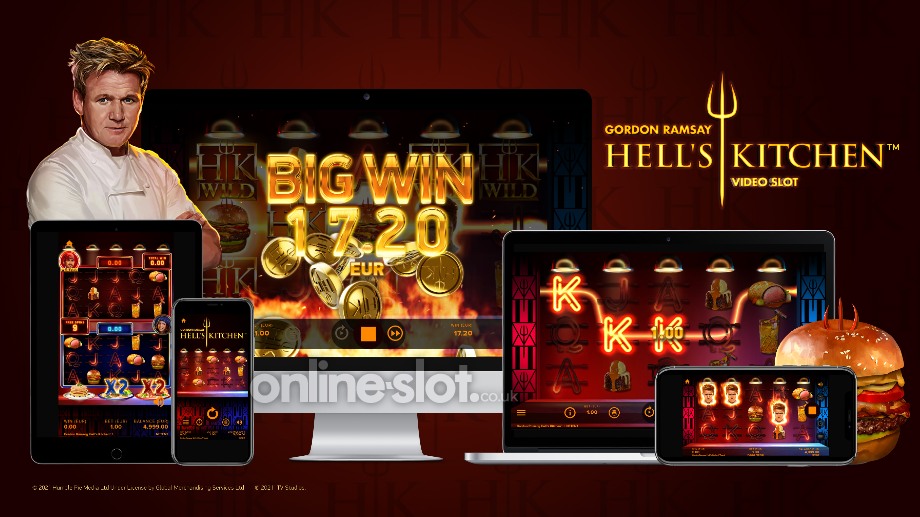 This game takes you to Las Vegas as the setting is Gordon Ramsey’s Gordon Ramsay: Hell’s Kitchen in Caesars Palace. With lights above each of the 5 reels, there’s an intense feel to the slot which sums up the chef’s temper and personality. As you spin the reels, you will hear Gordon’s infamous catchphrases.

Symbols on the reels include low value A, K, Q and J royals. The higher value symbols are represented by Gordon’s signature dishes. You will find a sticky toffee pudding, Gordon Ramsey’s signature cocktail, Hell Kitchen’s spicy burger and the Beef Wellington. The Beef Wellington symbol is the best payer giving you 2.25, 4 or 10 x your total stake for 3, 4 or 5 in combination.

The Gordon Ramsay: Hell’s Kitchen symbol is the wild and can appear anywhere on all 5 reels. As you’d expect, it substitutes for all symbols except the scatters.

Created with HTML5 technology, the Gordon Ramsay: Hell’s Kitchen slot can be played on desktop, mobile and tablet devices. The 5×3 reel layout looks just as clear on smartphones than it does on laptops and PCs.

Gordon Ramsay: Hell’s Kitchen comes with 6 bonus features. With random wilds, the free spins is played on 2 play areas where each free spin sees multipliers and random wilds added. If your chosen team wins, you play a pick me style game for cash prizes and multipliers.

Randomly triggered on any base game spin, the Ramsay’s Wilds feature can be activated. Gordon throws knives or plates at the reels which then fix to a reel position. 5 to 7 wild symbols are added randomly to the reels. This dramatically increases your chances of landing a winning combination. 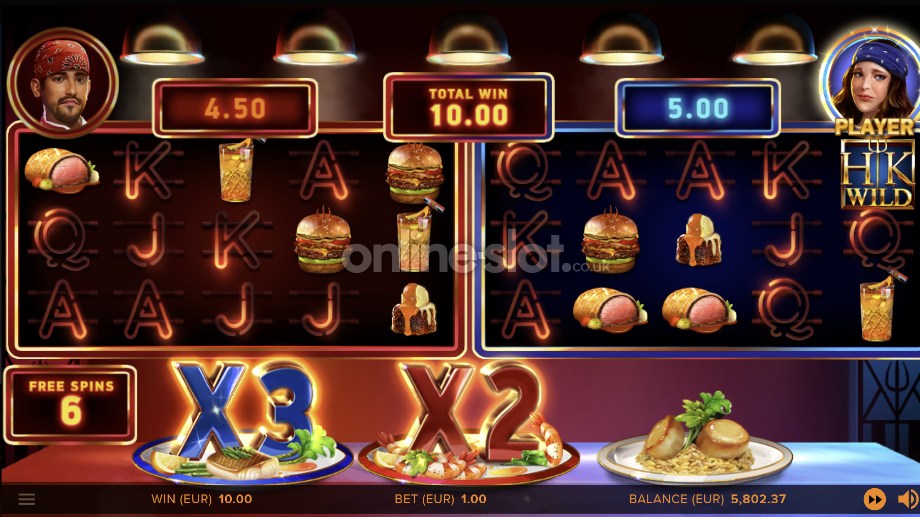 The Team Challenge Free Spins feature is played when 3 or 4 Gordon Ramsay scatter symbols appear on the reels. They can appear on all reels bar reel 3 (the middle one). 3 or 4 scatters will give you 10 or 15 free spins respectively.

You will see 2 play areas, each 5×3, which represent the blue and red teams. Before the free spins commence, you need to choose either the blue or red team.

On each free spin, 1 to 3 Order Up features are randomly triggered. They include:

The Order Up features are colour coded red and blue and apply to either the red or blue play areas respectively. If a 2x and 3x multiplier come into play at the same time, the multiplier values are added together to give you a 5x multiplier. 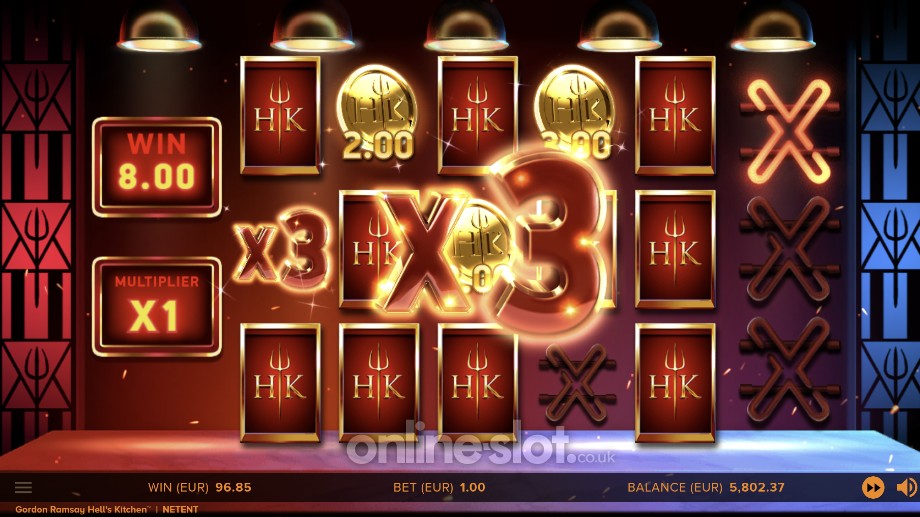 Once all free spins have played out, the team with the biggest total win is declared to winner of the competition. If you chose the winning team or the competition ends in a tie, you will activate the Gordon’s Bonus Game feature.

Here, you will come across 15 menus which you need to pick from. Behind each menu, there are 3 types of prizes:

You carry on picking until you uncover 3 ‘X’ symbols. The total win from this feature can be subject to the 2x and 3x multipliers.

The randomly-triggered Ramsay’s Wilds feature is decent and can add plenty of wilds on a base game spin. However, it’s all about the Team Challenge Free Spins feature. The bigger wins will come from the multipliers which can combine up to 5x. With 200 x stake to be won from each spin or free spin, the potential 5x multiplier can lead to 1,000 x stake payouts on every free spin.

Whilst the max win isn’t huge, NetEnt have done a decent job with Gordon Ramsay: Hell’s Kitchen. A disappointment personally is that Gordon is not swearing which is kind of the main reason why he’s so popular. Well, I don’t think NetEnt could have released Gordon Ramsay in his true glory in a slot game.

If you’re a fan of the chef or the TV series, Gordon Ramsay: Hell’s Kitchen will appeal. If you want harder-hitting branded slots with bigger win potential, the Game of Thrones online slot by Microgaming and Street Fighter 2 from NetEnt are recommended.

What is the Gordon Ramsay: Hell’s Kitchen RTP?

The Gordon Ramsay: Hell’s Kitchen RTP is 96.07% which is slightly above the slot average of 96%. Low to medium variance, most of the bigger wins will come from the various bonus features.

What is the Gordon Ramsay: Hell’s Kitchen max win?

The most you can win per spin is 1,000 x your total stake. The key to winning big is from the multipliers in the free spins which can combine up to 5x.

Are they any Gordon Ramsay: Hell’s Kitchen free spins?

Yes. The Team Challenge Free Spins feature gives you up to 15 free spins. Taking place on 2 play areas, 1 of 3 Order Up feature apply on every free spin. They give you multipliers up to 5x and random wilds.

How does the Gordon’s Bonus Game feature work?

In the free spins, you choose the red or blue team. If you don’t choose the losing side, you will play the Gordon’s Bonus Game feature. You then pick from 15 menus to win cash prizes and multipliers until you reveal 3 ‘X’ symbols.