The Gems of Adoria slot is powered by NetEnt and is their first 3D video slot. With cutting edge graphics, it has 5 reels and 15 paylines. Playable from 10p a spin on all devices, it has a sci-fi/fantasy theme and provides a superb new gaming experience. The game benefits from random striking wilds and random flipping symbols. There is also a Free Spins feature where you can win up to 50 free spins.

Where to Play Gems of Adoria Slot

Bonus Features in Gems of Adoria

The Gems of Adoria 3D slot comes with 3 bonus features. You have a Striking Wilds feature where up to 9 wilds strike the reels. The Flipping Symbols feature is new and sees symbols ‘flip’ to give you an improved winning combination each time. In the Free Spins feature, you can play with up to 50 free spins with the other 2 features in play. 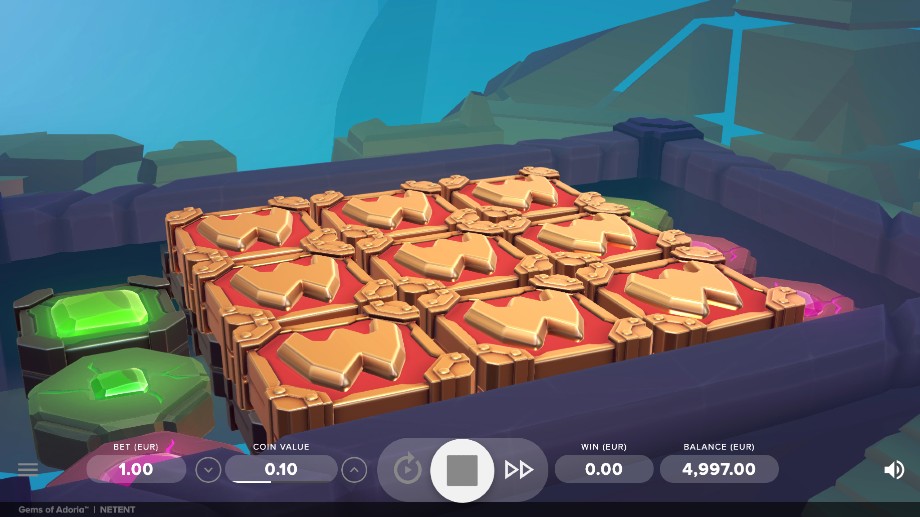 There is a randomly triggered Striking Wilds feature which can be triggered at any time. When activated, between 2 and 9 striking wilds are randomly added to the reels. This is sure to give you a winning combination.

Gems of Adoria also comes with a Flipping Symbols feature. Also randomly triggered, between 2 and 5 consecutive symbols are randomly chosen in a row and can flip either vertically or horizontally.

Every flip will result in an improved payout than the previous win or flip. You will see the symbols pop out of the reel set which looks pretty impressive truth be told.

Keep an eye out for the scatter symbol which is a light set within a stone case. 3 or more appearing anywhere on the reels will trigger the Free Spins feature with the following number of free spins:

Both the Striking Wilds and Flipping Symbols features can come into play during the free spins for increasing winning potential.

The Gems of Adoria slot is played with 5 reels, 3 rows and 15 fixed paylines. A win is created when you get 3 or more matching symbols across any of the 15 paylines, starting from reel 1. Pretty standard really.

Available to play from 10p to £200 a spin, there’s the usual Autoplay function where you play up to 1,000 autospins. You can customise it to stop for any win, if you get a win of a certain size or if your balance goes up or down by a chosen amount.

Low variance, it has a hit frequency of 22.1% meaning just over 1 in 5 spins will result in a winning combination. The random features trigger fairly frequently too. However, the max win is a disappointing 500 x your total stake which can be achieved if you fill the reels with the highest value gemstone symbol. The RTP is 96.13% which is average for an online slot. 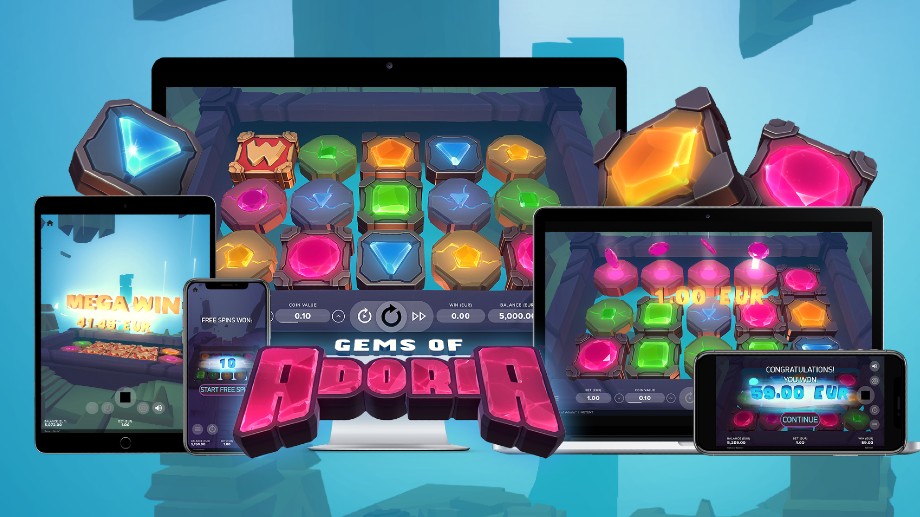 The Gems of Adoria slot is the first to use Real Time 3D technology and benefits from state of the art graphics and a unique soundtrack. It showcases three dimensional symbols which look like no other slot you’ve played before – well, not from NetEnt anyway.

The camera angle changes randomly on spins to give you an immersive experience. Visually, Gems of Adoria is unique and has a sci-fi and fantasy theme.

With the 5×3 reel set encased by a stone temple, you will see plenty of gemstones of the reels. With the reel set at an angle, the visuals are particular impressive. Every winning combination sees lightning strike the contributing symbols giving it a grand feel.

The most valuable symbol is the pink gemstone which pays 2.5, 5 or 15 times your stake for 3, 4 or 5 in combination. You will also see a W symbol which is the wild. It can appear on all 5 reels in the base game and Free Spins feature. As you’d expect, it substitutes for all symbols except the scatter.

With cutting edge technology, Gems of Adoria can be played on desktop, tablet and mobile devices. The 3D graphics look fantastic on all devices including smartphones. The experience is truly immersive.

The Gems of Adoria 3D slot does look the part. The graphics give it a grand feel. NetEnt says this game “presents an online casino experience like no other” – whilst this may be the case visually, the max win of 500 x stake is rather disappointing.

The Striking Wilds feature is basically a random wilds feature. The Flipping Symbols feature is a decent concept but the low value of the symbols and the low max win total is what lets Gems of Adoria down. NetEnt could have just increased the value of the symbols and the variance to create a really good attempt at their first 3D slot. Instead, they’ve released a low variance game which won’t appeal to slot lovers bar an initial gander.

NetEnt has produced much, much better slots. Gonzo’s Quest is ever-popular despite being their first platinum slot game and the volatile Dead or Alive 2 has earned cult status amongst players and streamers. Both these slots are recommended if you’re a NetEnt fan.

📱 Is there a Gems of Adoria mobile slot?

Yes. NetEnt has created the Gems of Adoria slot with HTML5 so it can be enjoyed on mobile, desktop and tablet devices that use iOS, Android or Windows technology. The 3D graphics and animations look spectacular even on smaller screens.

⭐ What’s the Gems of Adoria RTP?

The Gems of Adoria slot RTP is 96.13%. This is about average for an online slot. Low to medium variance, you’ll get plenty of winning combinations of a smaller nature mostly. Gems of Adoria is more about entertainment that max payouts.

Yes. The Gems of Adoria slot is a real time 3D video slot that comes with cutting edge graphics and unique sound. Offering a unique experience, you are taken closer to the reels as the camera angle moves around in 3D space. Nothing in the slot is static.