NetEnt has taken one of its most popular gemstone-themed games and given it a makeover to create the Dazzle Me Megaways slot. Like the original 2015 release, it’s played using a slightly unusual game engine where different number of symbols can land on each reel. That’s even more pronounced given the Megaways mechanic where the 6 reels can offer up to 99,225 ways to win when fully expanded. As well as avalanche reels, there are wild reels and a free spins feature. Dazzling wild reels appear on each free spin and expand in length with each winning combo that lands. Find out all you’ll need to know in our in-depth Dazzle Me Megaways review.

Where to Play Dazzle Me Megaways Slot

Just like the original game, the Dazzle Me Megaways slot is played using a 6 reel machine. The set up is rather different in the sequel though, starting with the Megaways mechanic. On each spin, between 2 and 9 symbols can appear on each reel.

That alters the number of ways to win for that spin. If all 6 reels reach their maximum height, you’ll have 99,225 Megaways active. As usual for a slot that uses a Megaways game engine, winners are created by landing matching symbols on adjacent reels, starting from reel 1.

Stake levels in Dazzle Me Megaways range from between 20p to £200 per spin. Click on the coins icon to change your bet size accordingly. There’s also a Turbo Mode and Autoplay function in some countries (no in the UK from October 2021).

The Dazzle Megaways RTP is 96.1% which is average for a Megaways game. The hit frequency rate is 23.63% meaning nearly a quarter of spins will result in a winning combination.

The volatility is in the medium bracket as the bigger wins will come from the free spins. The most you can win from a single spin and set of avalanches here is 50,000 x your total stake per spin. 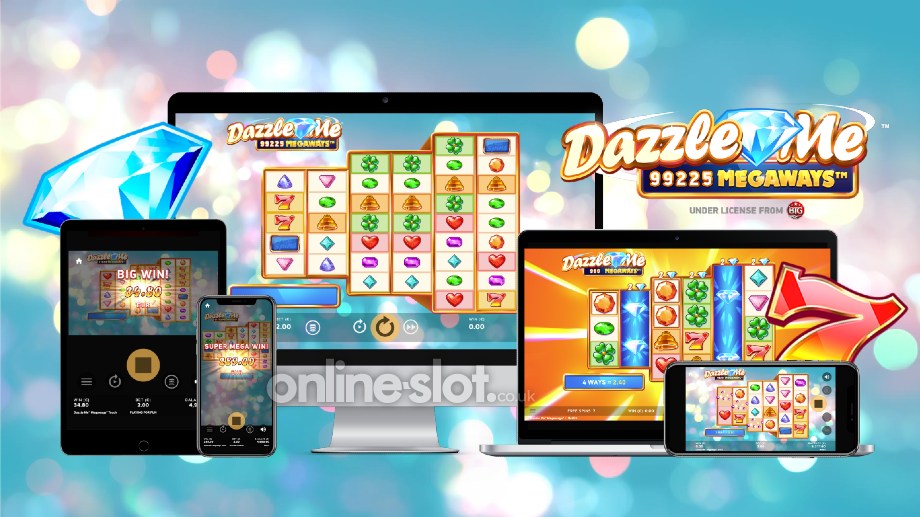 The design in the Dazzle Me Megaways slot is like a spruced-up version of the original. In case you’re wondering, that’s Dazzle Me. Set in world of dazzling gems, the graphics and animations are crisp and clear.

You’ll hear a classic fruity-style soundtrack playing in the background while you spin. As usual for a NetEnt slot, the design here is bright and bold and the soundtrack bouncy and upbeat.

On the reels, you’ll find an assortment of gemstone symbols which appear alongside some classic fruity image including 4 leaf clovers, bells and lucky 7s. The lucky 7 is the most lucrative symbol, paying 3 x your total stake if you land 6 on adjoining reels.

The diamond is the wild. This can substitute for all the standard symbols when it makes up part of a winning combination. Wild can fill whole reels too. These Dazzling Wild Reels are in play throughout the bonus round and can really get the action motoring when you trigger the free spins.

I’ve not always been a huge fan of playing Megaways slots on a small screen device but flip your smartphone into landscape mode and Dazzle Me Megaways plays rather well. The colourful imagery is clean and crisp when playing on a mobile or tablet device. The gameplay here is pretty straightforward which again makes it nicely suited to play on a small screen. The Dazzle Me Megaways mobile slot comes together well.

With 4 bonus features, the main extra in Dazzle Me Megaways is the Free Spins feature. Boosting your chances here are special Dazzling Wild Reels which turn whole reels wild.

After a winner has been formed, the Avalanche feature follows. Those successful symbols are blasted off the reels and new symbols drop into the vacated positions. A new payout consideration is then made with the new symbols in place. The avalanches keep on coming as long as a new winner is created. This also can be found in the original Dazzle Me slot game. 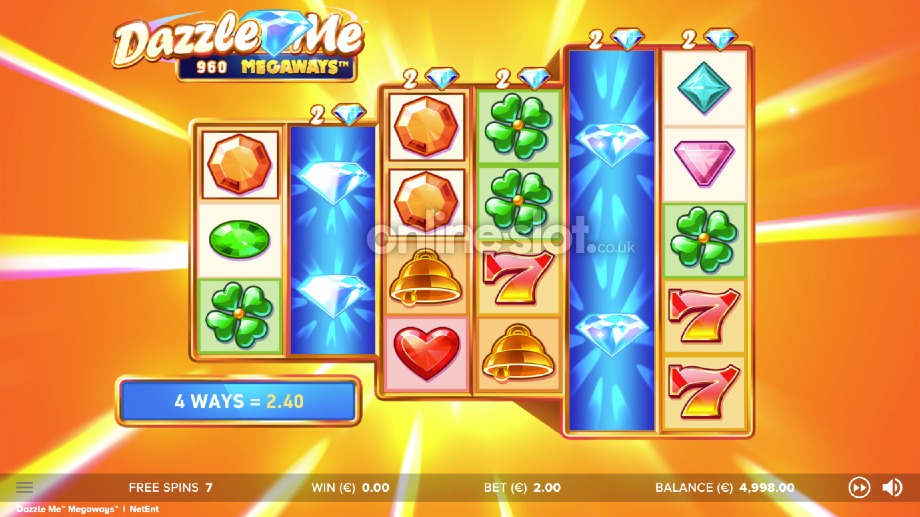 During the feature, at least 1 reel with the turned into a Dazzling Wild Reel. The whole of that reel will be wild for that free spin and any subsequent avalanches that follows.

Then you have the Dazzling Wild Reels feature. The number of wilds that appear in a Dazzling Wild Reel starts at 2. There are opportunities to add to that number though. Each time you land a win that includes a wild, the counter for that reel increases by 1.

Finally, the Megaways mechanic and avalanche wins are active during the free spins, just like in the base game. This means the Avalanches work in conjunction with the Dazzling Wild Reels.

There are plenty of similarities between the original Dazzle Me and the Dazzle Me Megaways version. The design is very similar and the almost triangular reels have a familiar look to them.

There are some key differences when it comes to gameplay though, starting of course, with the Megaways mechanic and the avalanche reels. The linked reels from the original have gone though.

They have been replaced by free spins and wild reels which increase in length as you land wins that include a wild. It’s a tidy new addition and adds something different for a Megaways slot which are often filled with the same old features.

Dazzle Me didn’t seem an obvious choice for a sequel or a Megaways upgrade. This Megaways version from NetEnt is nicely done though. It keeps the shell of the original but ramping up the action with a game engine that offers up to 99,925 ways to win. If you enjoyed the original, Dazzle Me Megaways is worth a closer look. Especially as it offers 50,000 x stake max wins.

You should also look at other NetEnt Megaways slots like Piggy Riches Megaways and Gonzo’s Quest Megaways which have been just as popular as the originals.

What is the Dazzle Me Megaways RTP?

The Dazzle Me Megaways RTP rate is 96.1% which is just above average for an online slot. However, the original Dazzle Me slot has a 96.91% RTP which is quite a bit higher.

The max win is 50,000 x your total stake. Whilst this can be won on any spin, your chances increase in the free spins due to the increasing Dazzling Wild Reels.

Are there any Dazzle Me Megaways free spins?

Yes, on each free spin in the Free Spins feature, 1 reel will be filled with at least 2 wilds. Land a win with a wild and the number of wilds that appear on that reel increases. This is the Dazzling Wild Reels feature.

Is there a Dazzle Me Megaways demo?

Yes, you can play the Dazzle Me Megaways free play version here at Online-Slot.co.uk. Play the demo on desktop, mobile and tablet devices too.