Eye-catching diamonds, rubies, emeralds, sapphires and opals can deliver rich rewards in the Reel Gems slot, a 5 reel, 243 ways to win game from Microgaming. This veteran slot first hit online casino shelves in 2010 but remains a popular game today. Feature highlights include the ability to pay to respin a reel which can trigger a winner or improve on an already successful position. Trigger the bonus round for 15 free spins with all payouts trebled. Those payouts can get as high as 120,000 coins during the feature round. With an RTP of 97.49%, this low variance slot offers plenty of play. Find out more in our in-depth Reel Gems review.

Where to Play Reel Gems Slot

Stake sizes here range from 25p to £125 per spin. Click on the coins in the bottom right-hand corner of the screen then choose your stake. Click on the arrows above the spin button for autoplay. You can set 10, 25, 50 or 100 autospins if required.

The Reel Gems RTP is 97.49% which is well above average and one of the best return to player rates you’ll see. This isn’t a volatile slot. In fact, the Reel Gems volatility is low. The hit frequency rate of 37.42% means that you’ll land a winner around every 2-3 spins on average.

The maximum win in the base game is 165 x stake. This rises to 495 x your total stake in the free spins which we’ll look at in detail shortly. 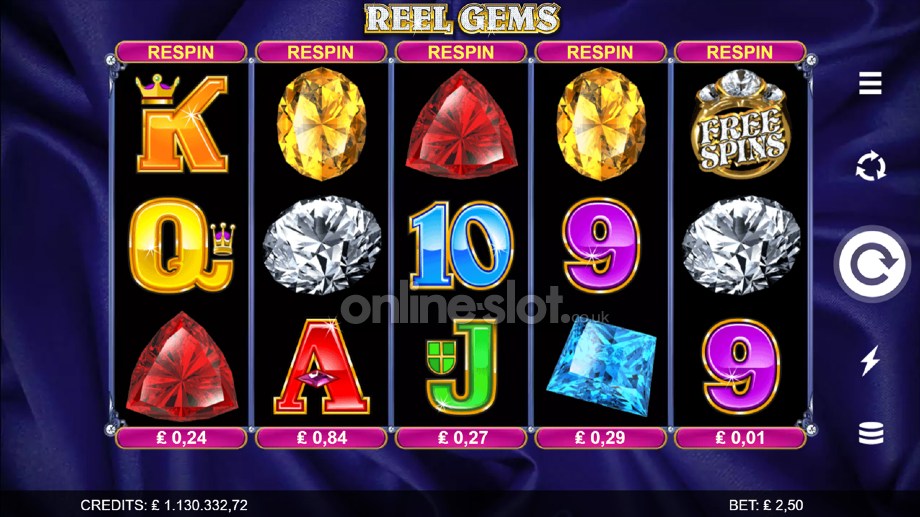 You’d expect a slot called Reel Gems to have a blingy theme and that’s just what you’ll find here. There’s gentle, easy listening soundtrack playing while you spin which matches the theme rather well. Released in November 2010, the design here looks a little old fashioned to modern eyes. The visuals are crisp and clear so it’s by no means a deal breaker.

The plain black reels feature lower value playing card symbols alongside 5 higher paying jewels. They include diamonds, rubies, emeralds, sapphires and opals. The shimmering white diamond is the most rewarding standard symbol. Land 2, 3, 4 or 5 in combination for an award of 0.4, 1.6, 16 or 160 x your total stake.

The Reel Gems logo is the wild. This can appear on reels 2 and 4 only. It substitutes for all the standard symbols when it makes up part of a winning combination. The gem-encrusted gold ring is the free spins scatter symbol. Land 3 or more of these to trigger the bonus round.

Reels Gems is available to play on smartphones and tablets as well as desktop computers. If you’ve got a suitable Android or Apple iOS handset, you’re good to go.

There are a couple of features to note in the Reel Gems slot. For starters, you’ll have the opportunity to pay to respin a reel following every spin. The main bonus is a free spins round where all payouts are trebled.

After a spin is completed, you’ll be offered the chance to spin 1 reel again. Called the Respin feature, this gives you the chance to try and improve an already successful combination into something evening better.

This doesn’t come for free though. The price to respin a reel varies depending on which reel you choose and what the current symbol set up looks like. How much it costs to spin a specific reel is shown below the reel. There are no limits to how many times you can respin a reel either.

The respins can be especially tempting if you have 2 free spin scatter symbols on display and you’re hoping to land a third to trigger the main feature. Finally, the Respin feature isn’t available if you’re using the Autoplay facility. 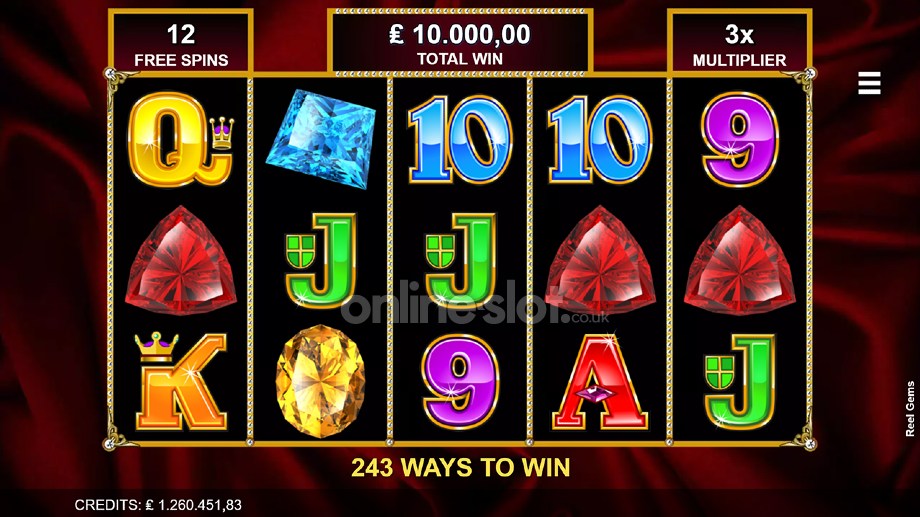 The Free Spins feature in Reel Gems is triggered in the standard manner by landing 3, 4 or 5 scatter symbols anywhere on the reels on the same spin. After you’ve received a payout equal to 2, 10 or 100 x your total stake, you’ll go on to play 15 free spins.

The simple gameplay on offer in the Reel Gems slot has proved very popular. There’s nothing revolutionary here but the Respins and the free spins with 3x multiplier are a decent combination.

The low volatility means that you can expect plenty of play for your investment. The high RTP of 97.49% stacks up favourably too against the slots with the best RTP rates. It might be an old ‘un but Reel Gems is still a very playable proposition.

If you want slots with high return rates, White Rabbit Megaways has a 97.77% RTP as well as 13,000 x stake payouts per spin. The highest RTP is 1429 Uncharted Seas from Thunderkick which comes with a 98.6% return.

What is the Reel Gems RTP?

The Reel Gems RTP is 97.49%. This places it amongst the highest available. For every £100 you wager on average, you’ll win back £97.49 which increases your chances of winning.

What is the Reel Gems max win?

The biggest possible payout is 495 x your total stake per free spin. This is due to the 3x multiplier. It comes with a hit frequency of 37.42% meaning over a third of spins will give you a winning outcome.

Are there any Reel Gems free spins?

Yes, the Free Spins feature is played when landing 3+ scatters. With up to 100 x stake awarded, you’ll begin with 15 free spins. With 15 more free spins to be won, all payouts during the free spins are trebled.

What is the Respin feature?

At the end of each spin, you’ll have the opportunity to pay and respin 1 reel and try and improve your position. Known as the Respin feature, the price varies on each reel depending on what symbols are on display.