Join the ancient Norse god of wisdom in the Odin’s Riches slot, an unusual cluster plays game from Just for the Win and Microgaming. Played on a 7x7 Rolling Reels grid, fill meters with winning symbols to bring Mini features into play. These award new winning clusters, Reel Rolls where low value symbols are removed from play, symbol upgrades and Reel Rolls with added wilds. Trigger the free spins for potentially unlimited free spins. On each of them, 1 of the modifiers will be randomly awarded. Also boosting your chances is an increasing multiplier. Find out more in our full Odin’s Riches review.

Where to Play Odin’s Riches Slot

Stake levels range from 20p to £50 per spin which caters to all pockets. Click on the coin to the right of the grid then choose from the stake levels. In some countries, there’s a Quick Spin mode and Autoplay facility where up to 100 autospins can be selected.

The Odin’s Riches RTP is 96.07%. Be warned though, this is an extremely volatile slot, despite a hit frequency rate of 49.44%. This means half of spins will result in a winning combination (on average). The max win is 5,000 x your total stake from a single spin. 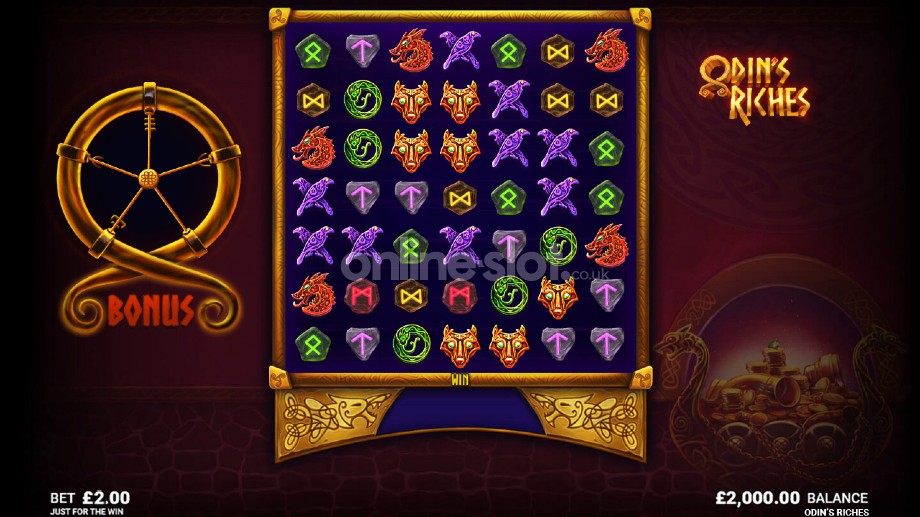 The Odin’s Riches slot has a Norse mythology theme. For those not up to speed on their Norse history, Odin was a Germanic god associated with wisdom and healing. As a result, there’s a strong Norse feel to the design here too. It’s rather simply done compared to some similarly themed slots but it comes together well.

There’s a rather ominous, drum-heavy soundtrack thumping away in the background which adds plenty of atmosphere. The understated sound and visuals here combine nicely.

The 7×7 reels are made up of 4 lower value neon runestones and higher paying animal motifs. They include ravens, a serpent, a wolf and a dragon. The dragon symbol tops the payouts, awarding 300 x your total stake if you land a cluster of 15 symbols. Equally rewarding is the gold wild which can land anywhere and substitute for all other symbols in a winning cluster.

You can try and part the Norse god from some of his riches whether you’re playing on a mobile, tablet or desktop computer. Despite the large game grid and the constantly moving parts, the gameplay stacks up pretty well on the smaller screen as the design is impressively put together.

With a total of 7 bonus features, there’s plenty of variety in Odin’s Riches. They include 4 modifiers as well as a free spins bonus where the modifiers and an expanding multiplier can enhance your opportunities.

The Rolling Reels feature, which is used in many Microgaming slots, is used in Odin’s Riches. After a winner is formed, the winning symbols are removed from the grids and new symbols drop in and replace them. A wild always appears in 1 of the vacated symbol positions. The Reel Rolls keep on coming as long as you form a new winning cluster. 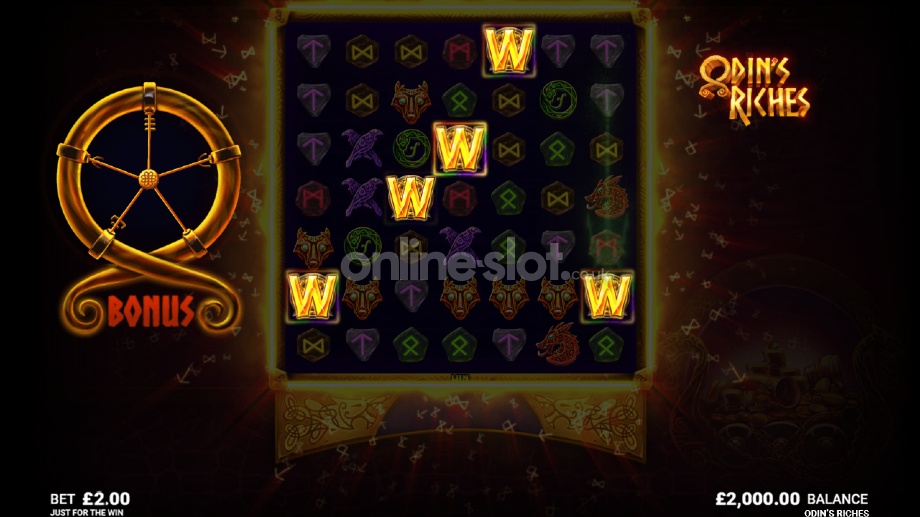 The Odin’s Wilds feature can trigger at random on any spin. Odin appears on the reels and drops between 4 and 9 wilds onto the grid. A new payout calculation and hopefully, a series of Reel Rolls then follow. This extra only applies in the base game. 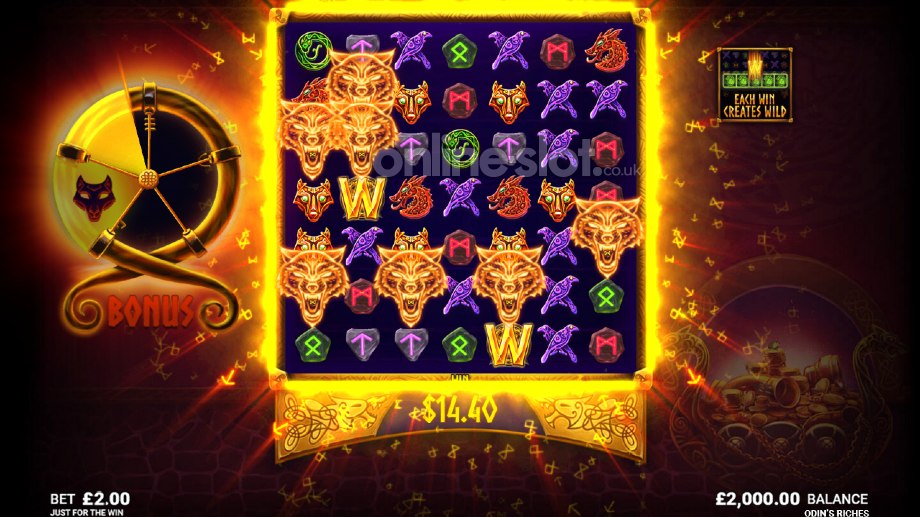 When you create a winning cluster, those symbols are added to the Bonus Meter to the left of the reels. For every 25 symbols collected in the Meter, a Mini feature is queued. These play out when there are winners on show from the current set of Reel Rolls. The Bonus Meter resets with each new spin.  There are 4 Mini features to benefit from: 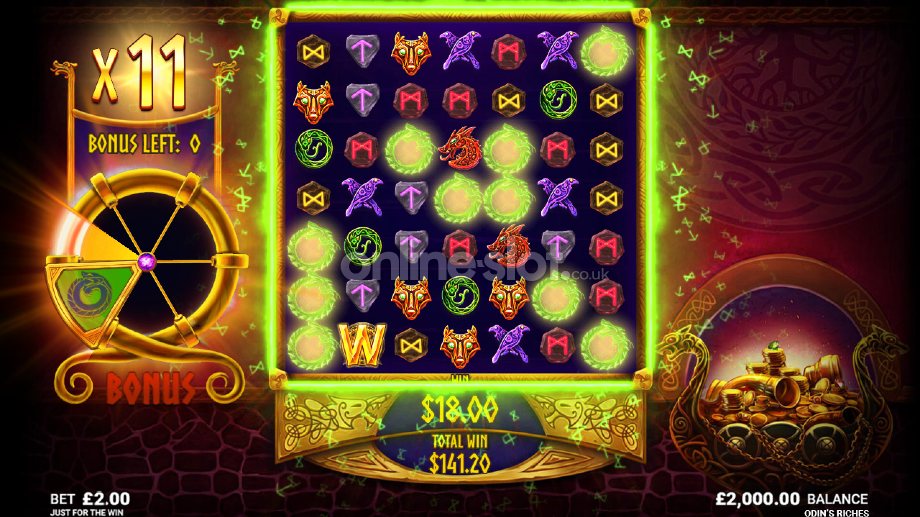 To trigger the Bonus Rounds feature, collect 125 symbols in the Bonus Meter. You’ll then receive 7 free spins. 1 of the 4 Mini features is queued up on each free spin.

The free spins start with a 1x multiplier active. That multiplier increases by 1 each time a Mini feature becomes active. Collect 125 symbols in a single free spin and 3 more free spins are added to your total, with no limits. The Bonus Meter resets each time there are no more winning clusters left on the reels.

The Odin’s Riches slot is rather different from your common or garden Norse-themed slot thanks to the minimalist design and the 7×7 cluster pays game engine.  It’s a game that can deliver plenty of action though, courtesy of the Rolling Reels and the quartet of Mini features.

Those Mini features can come into their own if you trigger the free spins, complete with the free spins and expanding multiplier. The key to big wins is from the increasing multiplier in the free spins though. 5,000 x stake max wins is decent but the variance here is extremely high. I like the fact it has a very high hit frequency rate of 49.44%.

If it’s a Norse saga you’re after, Thunderstruck 2 by Microgaming remains 1 of the most popular online slots ever. It features Odin, has 4 free spins features, a 96.65% RTP and 8,000 x stake max wins per spin. Another option is Hall of Gods from NetEnt which comes with 4,314 x stake wins per free spin and a progressive jackpot that averages out at €5.3 million.

What is the Odin’s Riches RTP?

The Odin’s Riches RTP is 96.07% which is bang on average. Highly volatile, you’ll get a winning combination every 2nd spin on average as it offers a 49.44% hit frequency rate.

What is the Odin’s Riches max win?

The most you can win from a single spin is 5,000 x your total stake. The key to big wins comes in the free spins where all 4 Mini features comes into play as well as an increasing multiplier.

What do the Mini features offer?

With 4 Mini features in play, they give you winning clusters, remove low value symbols, upgrading symbols and symbol removals. The latter sees up to 5 wilds land too.

Are there any Odin’s Riches free spins?

Yes, the Bonus Rounds feature begins with 7 free spins. The 4 Mini features are queued on each free spin. With unlimited extra free spins to be won, there’s an increasing multiplier for each roll.