Head high up into the clouds in the Noble Sky slot upon a steampunk airship in this 5 reel, 25 payline game from Neon Valley Studios and Microgaming. This superbly designed slot comes with a couple of features. Land a fully stacked airship wild to trigger the Respin Bonus. Respins are awarded with the wild airship moving 1 reel to the left each time. Each respin also increases a multiplier up to 10x. You’ll also have a chance to land 1 of 4 jackpot prizes worth up to 5,000 x stake. Discover more in our in-depth Noble Sky review.

Where to Play Noble Sky Slot

The Noble Sky slot uses a simple 5 reel, 3 row, 25 payline game engine. To create a winner, land 3 or more of the same symbol or wild in a payline on adjacent reels, starting from reel 1.

You can start your journey at stake levels that range from between 25p and £50 per spin. Just use the + and – buttons below the reels to adjust.  You can set 10, 25, 50 or 100 autoplay spins if required. There’s also a turbo spin mode. Click on the lightning bolt in the bottom right-hand corner of the screen to set this up.

This flight isn’t a hugely volatile one. In fact, the Noble Sky volatility is in the low to medium range. You can expect plenty of play for your investment. The Noble Sky RTP is 96.12% which is about average.

With a hit frequency of 44.45%, you’ll get a winning combination from nearly half of your spins. The max win is 5,000 x your total stake which will come from the fixed jackpots. 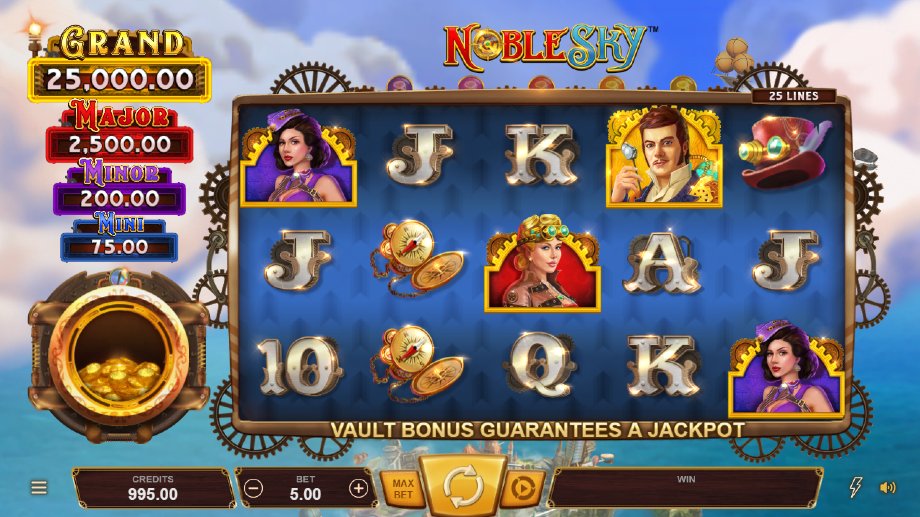 One area where Noble Sky really does excel is in its design. It looks and sounds terrific. There’s a luxurious feel to the visuals here. A trip aboard the Noble Sky, which is an airship, feels like a glamorous way to travel.

You’ll see mechanical wheels crank into life on each spin which are accompanied by a magical soundtrack that fits the theme perfectly. There’s a slight steampunk feel here but it feels a bit more high end than that. However you describe it, there’s plenty of atmosphere here.

With pale blue skies, fluffy clouds and floating mechanical balloons in the background, you’ll see A to 10 royals on the reels alongside a compass, a top hat, a hostess and an engineer. The most rewarding symbol is the rather dapper chap with the pencil moustache and eyeglasses. Land 2, 3, 4 or 5 of him on a payline for an award of 0.2, 1, 8 or 20 x your total stake. They don’t sound like enormous numbers. Remember though that the wild multipliers can help things along here.

The high-class sound and visuals come together very nicely in the Noble Sky mobile slot. The gameplay here is simple and works well on the small screen. The visuals are terrific, whatever device you’re playing on.

This airship extravaganza isn’t overloaded with extras but there are a couple of features that are worth noting. Boosting your base game chances are re-spins with stacked wilds and multipliers. Trigger the Vault bonus for a shot at landing a jackpot prize. 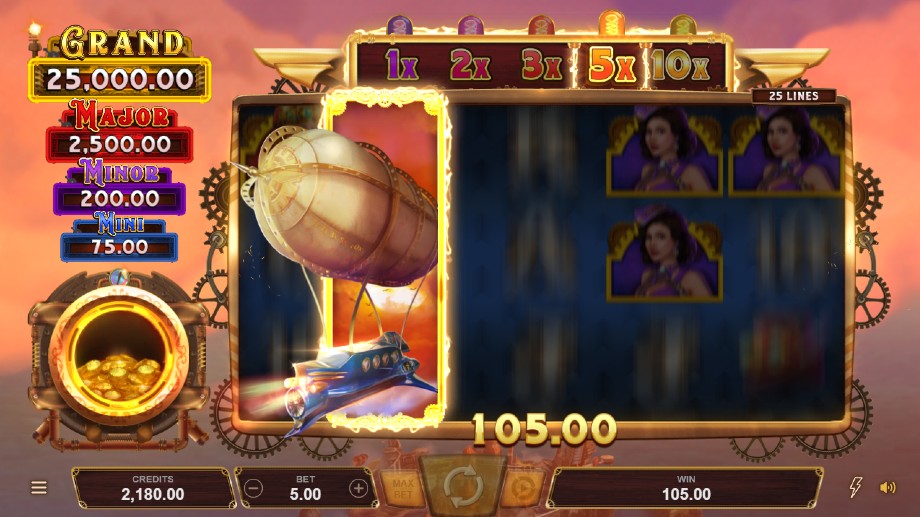 The airship symbol is wild. This spins in a stacked formation 3 symbols high and substitutes for all the standard symbols when it makes up part of a winning combination.

Fill the whole of a reel with a wild and you’ll trigger the Airship Wild Respins feature. A respin is awarded with the airship wild moving 1 reel to the left. The respins continue until the stacked wild drops off reel 1. The final respin plays out after the stacked wild has left the screen.

Each successive respin also brings an expanding multiplier into play. The win multiplier starts at 1x for the first respin, and increases to 2x, 3x, 5x, and 10x for any subsequent respins. 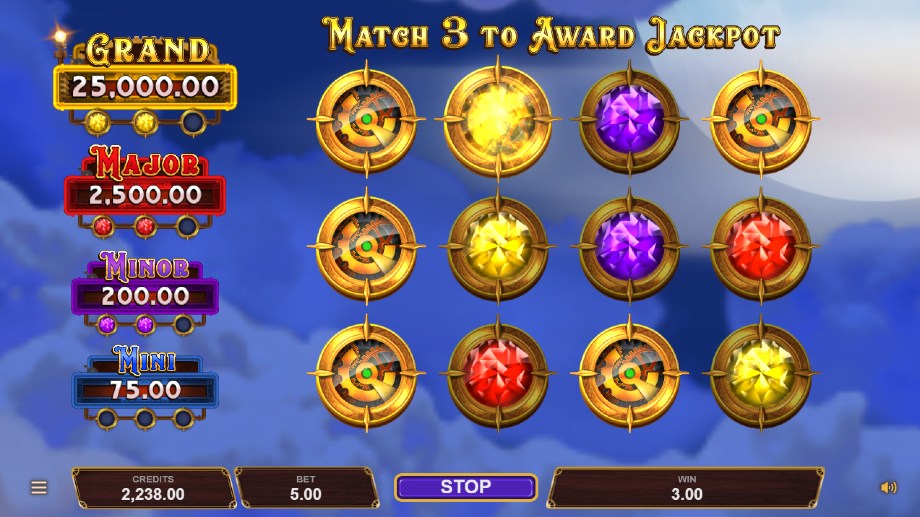 To the left of the reels, you’ll see a vault. On any spin, you could see a gold coin attached to a standard symbol. Each coin is added to the vault. On any spin that includes a gold coin, the vault can open. This triggers the Vault Bonus feature where you will land 1 of 4 potential fixed jackpot prizes.

You’ll then be offered the pick of 12 coins. Behind them lie icons that match the Mini, Minor, Major or Grand Jackpots. Keep picking until you land 3 that match. You’ll then win the associated jackpot:

We rather enjoyed our virtual trip among the clouds. The Noble Sky slot is a treat for both the eyes and ears.  If you like slots that offer huge amounts of variety, this might not be one for you. The gameplay can be rather repetitive but the stacked wild respins can be well worth landing courtesy of the expanding multipliers.

Add the jackpots into the mix and a voyage on the Noble Sky is one worth making. If you like the steampunk feel, Thunderkick’s Riders of the Storm slot is recommended as too is Kingdoms Rise: Scorching Clouds by Playtech.

What is the Noble Sky RTP?

The RTP is 96.12% which is about average. With a high hit frequency of 44.45%, you’ll get a win in nearly half of spins. This virtual airship ride isn’t a high variance one. The Noble Sky volatility is in the low to medium range.

What is the Noble Sky max payout?

The most you can win in the Noble Sky slot is 5,000 x your total stake. This can be won in the Vault Bonus feature where you make picks to win 1 of the 4 jackpots. The Grand Jackpot offers the 5,000 x stake prize.

Is there a Noble Sky free spins round?

No. Instead, there are respins with stacked wilds which shift 1 reel to the left until they drop off the screen. Each shift left also increases a multiplier which can reach up to 10x. Find out more about the Airship Wild Respins feature.

Where can I play Noble Sky?

Noble Sky is powered by Microgaming. You’ll find it available at a huge range of casinos and slot sites that offer Microgaming games. Check out the best Microgaming sites for the pick of the best places to play.