The Jurassic World slot is a 5 reel, 243 ways game from Microgaming. The official slot for the 2015 blockbuster film, you can spin away from 30p a spin on all devices. There’s an Indominus feature which randomly boosts wins in the base game to give you up to 1,000 times your total stake. The Free Spins feature gives you the choice of 3 locations and starts you with 10 free spins. This can lead to multipliers up to 7x, Rolling Reels and freezing Cyro Wilds as well as wild scatters will give you more free spins. You can win up to 14,166 x your total stake on a spin too.

Where to Play Jurassic World Slot

The Jurassic World slot is played with 5 reels, 3 rows and 243 ways to win. A winning combination is created by landing 3, 4 or 5 matching symbols on adjacent reels beginning from reel 1. Pretty standard for a 243 ways to win slot game.

You can play the official slot from 30p to £18 per spin. There’s an Auto Play option where you can choose 10, 25, 50 or 100 auto spins. With the option to view your balance in coins or credits, there’s a Quick Spin setting to make the reels spin a little faster.

Variance wise, Jurassic World is in the middle meaning balanced payouts throughout. With an RTP of 95.45%, it comes with a hit frequency of 31.09% meaning nearly 1 in 3 spins will result in a winning combination.

Whilst the RTP isn’t as high as other slots, it does offer huge winning potential. The max win is 14,166 x your total stake per spin. To win this, pick the Gyrosphere Valley in the Free Spins feature where the multiplier can reach 7x.

The Jurassic World casino slot has 3 bonus features. Landing 2 scatters will give you wilds whilst there’s an Indominus feature where you can win cash prizes up to 1,000 x stake. It’s all about the Free Spins feature where you explore 3 different locations which each offer something different.

Look out for the fly trapped in the amber stone fossil. This is the scatter. When 2 appear on the same base game spin, they will trigger the Scatter feature and transform into wilds. Whilst you want 3 to trigger the Free Spins feature, getting 2 wilds is a consolation. 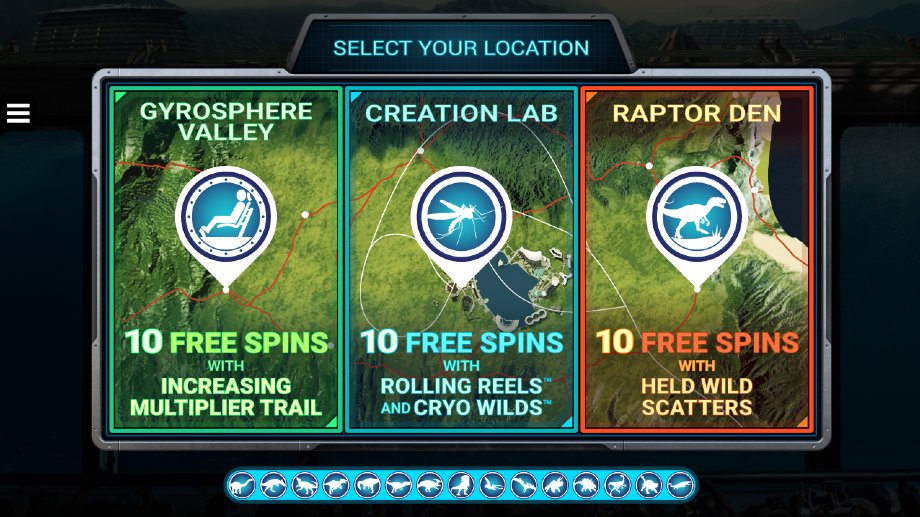 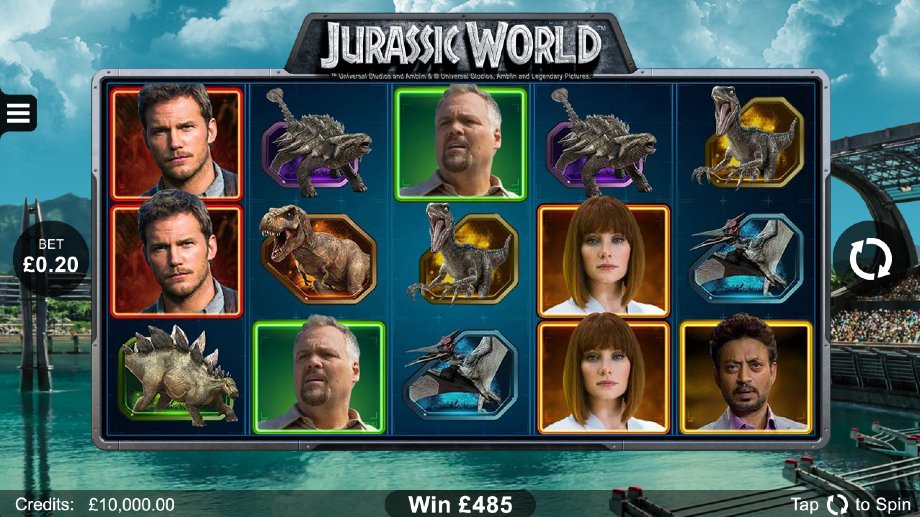 Created in partnership with Universal Pictures and following on from the original Jurassic Park slot (and film), the Jurassic World slot is the official game for the 2015 blockbuster film. Visually, and as you’d expect, it has stunning visual effects which does the film justice considering it’s the 6th highest grossing film of all time (at time of writing).

The Jurassic World logo is the wild symbol which substitutes for all symbols except the scatter. More importantly, wilds appear stacked up to 10 symbols high! The amber-encased symbol is the scatter which can lead to the Scatter and Free Spins features described above.

Produced with HTML5 technology, you can play the Jurassic World slot game on desktop, mobile and tablet devices. The simple 5×3 layout works well on smaller screens. For the best visual and audio experience, a laptop or PC is recommended though.

The Jurassic World slot doesn’t offer anything revolutionary when it comes to bonus features but the win potential is huge. The key to winning big is in Gyrosphere Valley where the multiplier can reach 7x. This can lead to 14,166 x stake wins on each free spin.

The randomly triggered Indominus feature will more than often than not give you wins of under 30 x stake but it will surprise you sometimes. Visually, it’s a stunning game and highly recommended if you love the Jurassic Park films. You should also check out the original Jurassic Park slot which is just as good. If you want slots based on films, see our branded slots section where there’s plenty to choose from.

What is the Jurassic World max win?

The most you can win from a spin in Jurassic World is 14,166 x your total stake. This will come in the Gyrosphere Valley from the Free Spins feature where the multiplier can reach 7x.

Where can I play the Jurassic World slot?

What is the Jurassic World RTP?

The RTP is 95.45% which isn’t the highest for an online slot. With a hit frequency of nearly 1 in 3 spins, this nicely balanced slot can give you 14,166 x stake wins as well as big wins from the other bonus features.

Is Jurassic World an official slot?

Yes. Microgaming teamed up Universal Pictures to create the official slot for the 2015 film. Visually 1 of the best slots you’ll come across, it features characters from the movie as well as the official soundtrack and graphics.