Take a classic fruit machine and give it a Megaways-style makeover and you’ll come up with something like the Joyful Joker Megaways slot. Created by All41Studio and Microgaming, it’s a 6 reel, cascading wins video slot where the number of Megaways can get as high as 117,649. Feature highlights include the Joker Spin where a bonus wheel can award multipliers of between 2x and 10x. Trigger the Free Spins feature for unlimited free spins complete with an expanding multiplier which increases with each Rolling Reels win. Payouts here can top 23,000 x stake from a single spin if the multipliers do their stuff. Find out more in our in-depth Joyful Joker Megaways review.

The Joyful Joker Megaways slot uses the popular Megaways engine from Big Time Gaming. The number of symbols that can appear on each reel varies with each spin. Reels 1 and 6 can show up to 7 symbols with reels 2, 3, 4 and 5 showing up to 6. There’s also a top row of 4 positions which sit above the central reel.

The more symbols on show, the more active Megaways and the more opportunities you’ll have to land a winning combination. If all 6 reels reach their maximum, you’ll have 117,649 ways to win. Keep tabs on how many Megaways are active on a spin in a meter in the top left-hand corner of the screen.

To create a winning combination, you need to land 3 or more matching symbols on adjacent reels, starting from reel 1. The number of ways to win varies with each spin but can get as high as 117,649. Stakes range from between 20p and £20 per spin. Click on the coins to the right of the reels then scroll up and down until you find your level.

The Joyful Joker RTP is 96%. The variance is in the medium to high category with the hit frequency coming in at 27%. This mean just over a quarter of spins will result in a winning outcome. The maximum win comes in at over 23,000 x your total stake from a single spin. 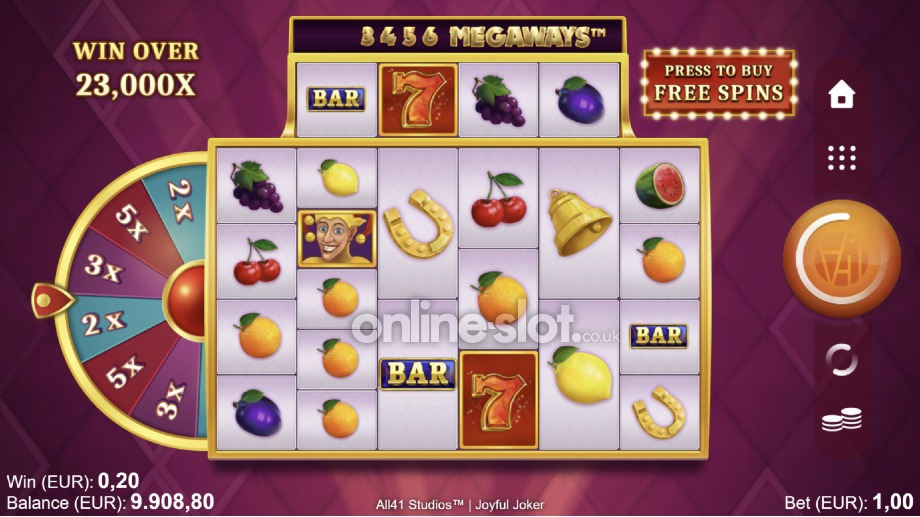 All41Studios has kept things simple as far as the design of the Joyful Joker Megaways slot is concerned. It’s different to Shamrock Holmes Megaways for example which are visually better and have more back story.

With a joker theme, the generic backing track sounds like the theme tune to a TV gameshow. That’s certainly the case when the Joker Spin triggers. With the screaming crowd, it sounds like it could come straight out of an episode of The Price is Right.

The light purple reels are made up of a collection of classic fruit machine symbols. In order of value are cherries, lemons and oranges followed by the plums, grapes and melons. Next come the golden horseshoes followed by the bells and bars. The lucky red 7 is the most rewarding symbol. Land 6 of these in combination and you’ll pocket an award equal to 50 x your total stake.

The white diamond is the wild. This substitutes for all the standard symbols when it makes up part of a winning combination. The slightly deranged looking Joyful Joker is the scatter. This can trigger the bonus feature (more on this below).

You can join the Joyful Joker on all devices including mobiles, tablets, PCs and laptops. Sharp imagery is a must with Megaways mobile slots and Joyful Joker is on the money. This is very straightforward to play.

You’ll find some staples of Megaways slots in this fruity reboot. With 4 bonus features, look out for Rolling Reels, free spins and expanding multipliers. There’s also the Joker Spin which is a bonus wheel that can award a multiplier which is active on your next spin.

When you land a winning combination, the Rolling Reels feature applies. Winning symbols are removed and replaced with new symbols. The rolls keep on coming until no new winning combination is created. This is available in the base game and free spins.

The Joker Spin feature can trigger at random on any winning spin. The Wheel to the left of the reels whirs into life and the jolly joker gives it a spin. Depending on where the pointer lands, you’ll receive a multiplier worth 2x, 3x, 5x or 10x which will be applied on the following Reel Roll.

Create a winning combination here and the symbols are removed from the reels and new ones replace them as per standard play. The value of the multiplier increases by 1 with each successive Reel Roll win. Following an unsuccessful Reel Roll, the multiplier resets to 1x. 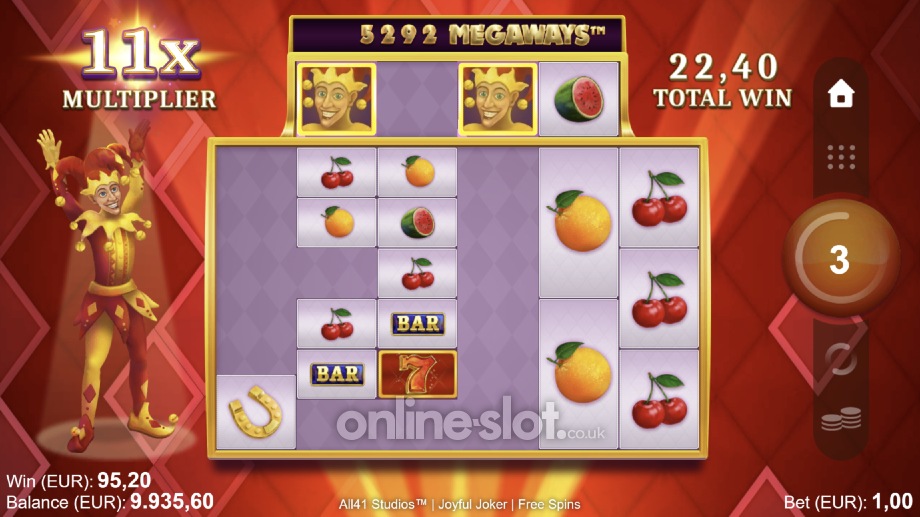 Land 4 joker scatters on the same spin and you’ll trigger the Free Spins feature with 10 free spins. A further 2 free spins are added for each extra scatter on the triggering spin. If you were to trigger with 6 scatters for example, you’d begin with 14 free spins.

The feature starts with a 2x multiplier. Each time you land a Rolling Reel win, the value of that multiplier increases by 1. There’s no limit to how high the multiplier can go here.

Retriggers are possible too. Land 3 or 4 joker scatters in the top window positions and another 3 or 4 free spins are added to your current total. Again, you can play with unlimited free spins.

In some territories, players will have the option to buy the Free Spins feature. Known as the Buy feature, how much this costs varies depending on the starting multiplier:

The Joyful Joker Megaways slot is nicely done. You won’t find anything massively original here but the Joker Spin multipliers add an extra later to the gameplay.

The free spins with the increasing multipliers offer the best opportunities. Get on a roll there and Joyful Joker Megaways could leave you laughing.

However, with so many Megaways slot games available, there are much better alternatives out there like Extra Chilli Megaways (from Big Time Gaming).

What is the Joyful Joker Megaways RTP?

The Joyful Joker Megaways RTP is 96% which is a standard rate. With a hit frequency rate of 27%, expect a winning combination every 4 spins or so on average.

What is the Joyful Joker Megaways max win?

If the multipliers work their magic, the maximum win in Joyful Joker Megaways can get as high as 23,000 x your total stake per spin. This can be won in the base game and the free spins.

What is the Joker Spin feature?

The Joker Spin feature can trigger on any winning spin. The Joker spins a multiplier wheel. You’ll then receive a 2x, 3x, 5x or 10x multiplier on the following spin. Successive Reel Roll wins increase the value of that multiplier.

Are there any Joyful Joker Megaways free spins?

The Free Spins feature will begin with at least 10 free spins and a 2x multiplier. With unlimited retriggers available, each rolling reel win increases the multiplier by 1, with no limits.