If there weren’t already enough reasons to play Microgaming’s classic vampire romance, the developer has added another by adding the potential riches of a progressive jackpot into the mix with the Immortal Romance: Mega Moolah slot. This jackpot version comes with the same feature-filled gameplay as the original including 2x multiplier wilds, the Wild Desire feature which can turn multiple reels wild and 4 different free spins features which come with a variety of wild and multiplier extras. You’ll also have a shot at scooping an enormous Mega Moolah jackpot. Discover more about this updated classic in our full Immortal Romance: Mega Moolah review.

The Immortal Romance: Mega Moolah slot comes with 5 reels, 3 rows and 243 ways to win. Create winners by landing 3, 4 or 5 matching symbols or wilds on adjacent reels, starting from the first reel.

Stake levels here range from between 30p and £6 per spin. Click on the coins icon to change your bet accordingly. Like with other Microgaming slots, there’s a Quick Spin facility as well as an Autoplay function. These 2 options will not be available to UK players from October 2021.

The volatility is in the high range meaning big wins will be hard to come by. The maximum win, excluding the Mega Moolah jackpot prizes, is 12,150 x your total stake.  When it comes the jackpots, the Mega Jackpot begins at £1 million. 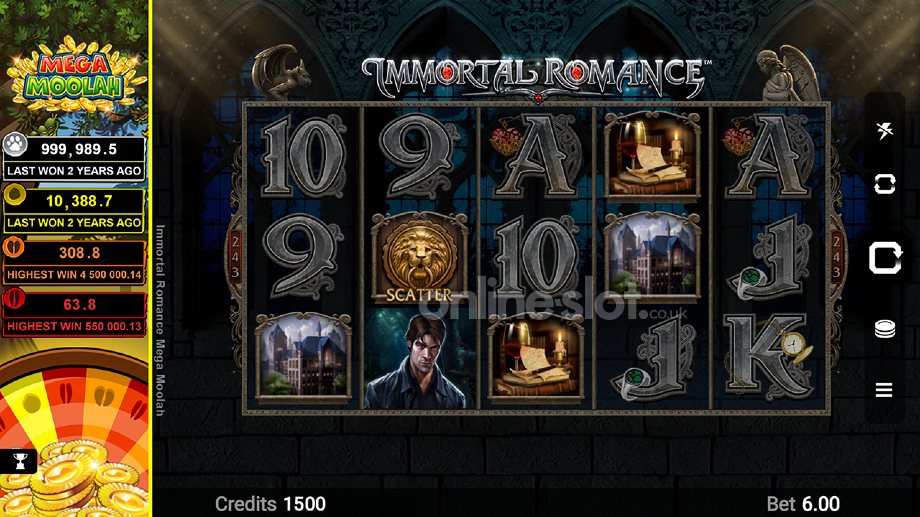 The design here will be instantly recognizable to anyone who has played the original Immortal Romance. With the non-jackpot version released in 2011, Microgaming has added 4 jackpots to the Immortal Romance: Mega Moolah slot so it looks exactly the same.

For the uninitiated, it has a vampire theme. This romantic horror has a strong Gothic feel. Graphically, Microgaming have not changed a thing. This is not a bad thing as the design here has really stood the test of time.

The reels include lower value A to 9 symbols which appear alongside candles, a haunted house the 4 main characters: Amber, Troy, Michael and Sarah. Sarah is the most rewarding standard symbol, paying 16.66 x your total stake if you land 5 on a payline.

There’s also an Immortal Romance logo wild symbol that pays up to 30 x stake in its own right. It also doubles the payout when it forms part of a winning combination with a standard symbol. The door knocker is the scatter symbol. This can trigger the feature if you land 3 or more on the same spin.

You can play Immortal Romance: Mega Moolah on mobiles and tablets as well as desktop devices. It works well the smaller screen devices too. This is a very playable mobile slot.

One of the reasons why Immortal Romance has become such a fan favourite is the wide variety of extras it offers. Bonuses includes 2x multiplier wilds, wild reels and an assortment of free spins feature. Immortal Romance: Mega Moolah now offers the chance to land a Mega Moolah jackpot too giving you 9 bonus features in total. 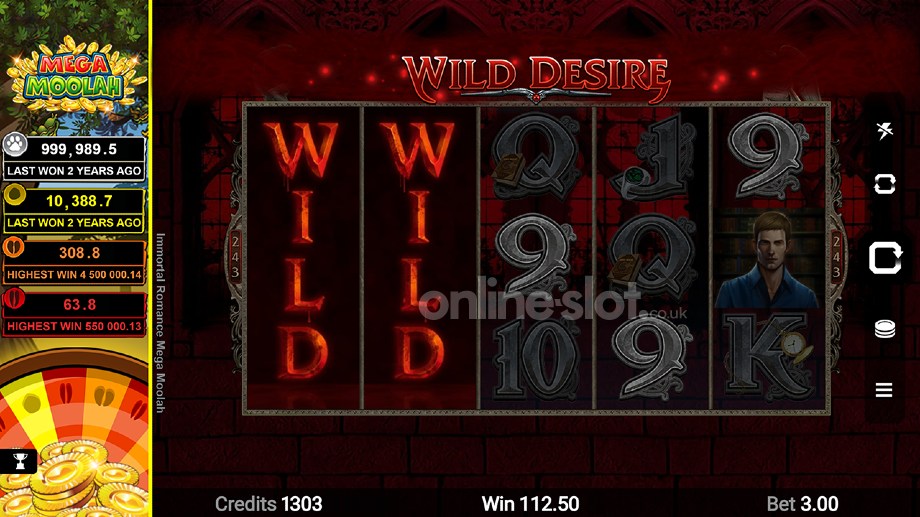 The Wild Desire feature can trigger at random on any base game spin. Between 1 and 5 reels will be filled with wilds. Yes, this means up to 5 fully wild reels which would result in a 12,150 x stake win. A payout calculation is then made with the wild in position.

The Chamber of Spins features 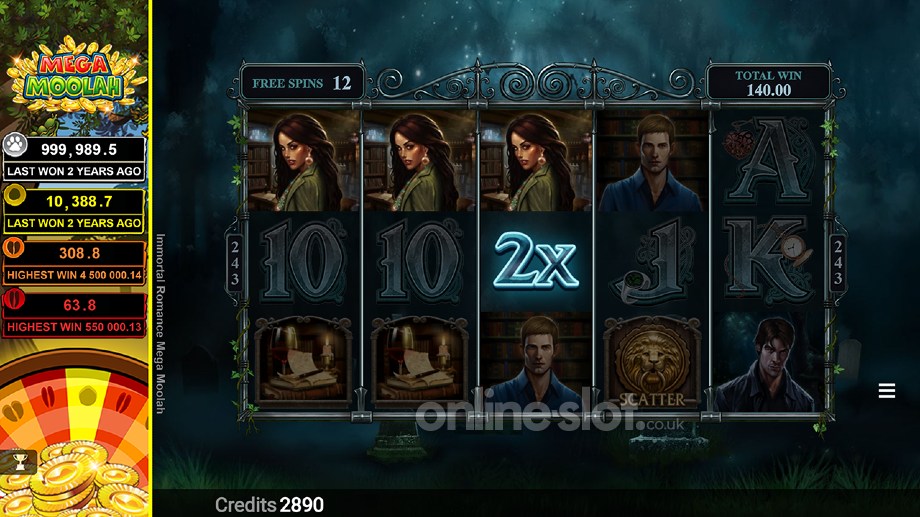 Free spins are central to much of the best action on offer in Immortal Romance: Mega Moolah. They’re triggered in the usual manner by landing 3, 4 or 5 door knocker scatter symbols anywhere on the reels on the same spin. You’ll receive an award of 2, 20 or 200 x your total x stake before going on to play a free spins feature.

There are 4 features, each based on 1 of the game’s character symbols: Amber, Troy, Michael and Sarah. You’ll start by playing the Amber free spins. The others unlock after you’ve landed The Chamber of Spins number a specific number of times. Here’s what to expect:

Amber feature: here, you can look forward to 10 free spins. All wins are boosted by a 5x multiplier. There’s a retrigger available for up to 20 free spins. This option can always be played.

Michael feature: this becomes available following the 10th bonus trigger. On offer are 20 free spins with the Rolling Reels feature. Each successive Rolling Reel win increases a multiplier from 2x to 3x, 4x and potentially 5x.

Sarah feature: this round unlocks when you’ve triggered The Chamber of Spins 15 times and offers 25 free spins, complete with the Wild Vine feature. If the vine appears on the middle reel, it will turn up to 14 symbols into wilds, greatly boosting your chances of a win. Land 2, 3, 4 or 5 scatters to add another 2, 3, 4 or 5 free spins to your total. 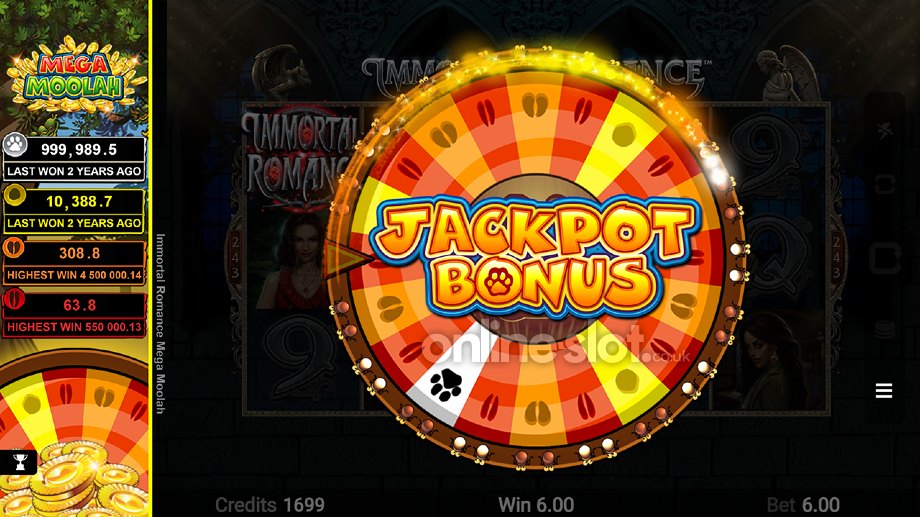 Immortal Romance: Mega Moolah is part of Microgaming’s record-breaking progressive jackpot network. The Jackpot Bonus feature can trigger at random on any paid spin. You’ll then spin a wheel which gives you a shot at landing the Mini, Minor, Major or Mega Jackpot.

You can check the current value of the jackpots in the meters to the side of the reels. The Mega Jackpot starts at a cool £1 million. Here’s what each of them offers at a minimum:

Now, the Mega Moolah jackpot network is the most popular online. The Mega Moolah slot paid out €18.9 million in September 2018 which is a world-record by the way. The average Mega Jackpot is over £3 million and is hit every 65 days on average.

Whilst they may be considered a cop-out by Microgaming, this version will appeal to fans of the original slot. It has all the bonus features that made the original so popular with the same max win available (12,150 x stake). The key to big wins is by getting 5 wild reels in the Wild Desire feature or in the Troy feature.

However, the difference is in the RTP rate. The original has a high 96.86% RTP whilst the jackpot version is 93.4%. If you’re chasing jackpots, this is fine though. It might all sound a little unlikely but it actually comes together very well. Even without the jackpot element, this horror favourite is a very playable game.

What is the Immortal Romance: Mega Moolah RTP?

What is the Immortal Romance: Mega Moolah max win?

The most you can win per spin is 12,150 x your total stake. However, the progressive jackpots can pay a lot more with the Mega Jackpot beginning at £1 million.

How do I win the Immortal Romance: Mega Moolah jackpots?

The Jackpot Bonus feature is triggered randomly and sees you spin a wheel to win 1 of 4 jackpots. The one you want is the Mega Jackpot which is seeded at £1 million. It’s paid a world-record €18.9 million before.

Are there any Immortal Romance: Mega Moolah free spins?

Yes. The Chamber of Spins gives you access to 4 free spins features. These come with a variety of extras including 5x multipliers, 2x and 3x multipliers, Rolling Reels with multipliers and spreading wilds.