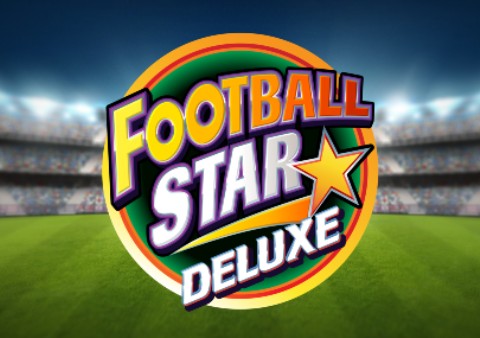 The Football Star Deluxe slot is the sequel to the popular Football Star game released by Microgaming in May 2014. With 5 reels, you can play with 18, 38, 68 or 88 paylines. Playable on all devices from 18p to 88p per spin, the RTP can reach as high as 96.88%. There’s a random wild reel feature in the base game as well as Rolling Reels for consecutive wins. It focuses on the Free Spins feature where you get 12 free spins. Continuous wins increase the multiplier up to 8x and wild stacks grow with every free spin for top wins of 3,200 x stake.

Football Star Deluxe comes with a total of 5 bonus features. Central to the gameplay is the Rolling Reels feature where you can continuous wins. With a random wild reel feature, the free spins gives you rolling reels with increasing multipliers as well as growing wild stacks.

The Football Star Deluxe online slot uses the Rolling Reels feature found in other Microgaming slots like Jurassic World. When you get a winning combination, the contributing symbols are removed from play. New symbols then drop in. This allows you another chance to win again. The reels continue to roll as long as you form new wins. 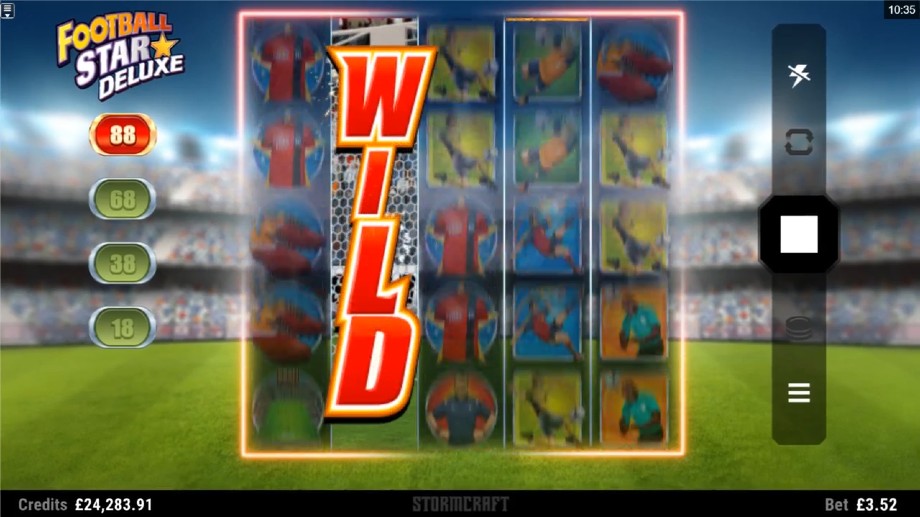 Look out for football players randomly appearing in the base game. They can turn reel 2, 3 or 4 (any of the 3 middle ones) into a wild reel for a guaranteed win. The wild reel then remains fixed in position for all subsequent rolls. The hit frequency of this feature in 1 in 115 spins. 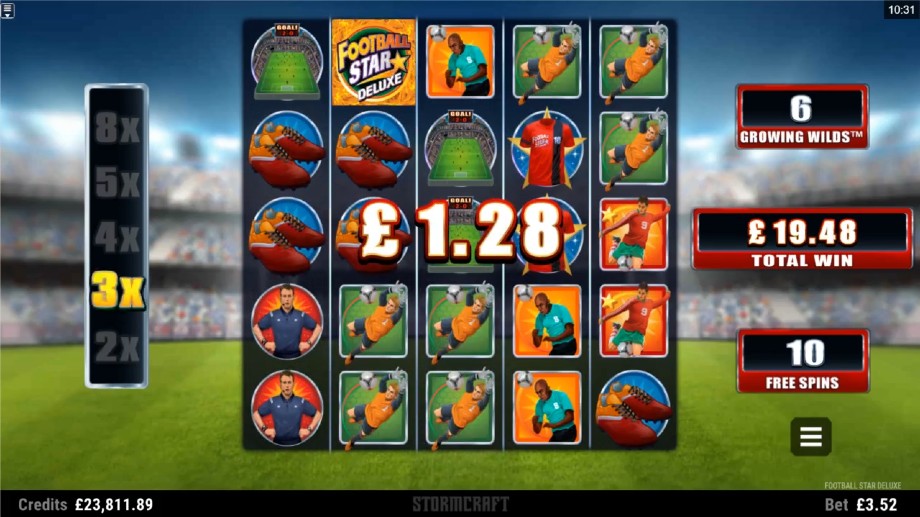 The Free Spins feature is played when you land 3 or more trophy scatters anywhere on the reels. 3, 4 or 5 in combination will pay out 5, 25 or 252 x your stake as well as award 12 free spins with a 2x multiplier. So far, so standard. You will trigger the feature 1 time in every 139 spins on average.

The Rolling Reels feature applies in the free spins. However, each roll triggers the Multiplier Trail feature. The multiplier increases with each consecutive win up to 8x:

There’s more. Super stacked wilds appear on reels 2, 3, 4 and 5 during the free spins. Each wild stack grows by 1 wild in size after every free spin. This is known as the Growing Wilds feature.

The Football Star Deluxe slot has 5 reels and between 18 and 88 paylines. A win is formed by getting 3, 4 or 5 matching symbols across a payline. You can opt for 18, 38, 68 or 88 free spins. The stakes obviously change on each option:

Like with other Microgaming slots, you can use a Quick Spin mode and an Auto Play function where you can select up to 100 autospins.

When it comes with variance, Football Star Deluxe is a high variance slot. With a total hit frequency of 32.16%, nearly 1 in every 3 spins will result in a winning combination of some kind. The max payout per spin is 3,200 x your stake. This can be achieved with the 8x multiplier in the Free Spins feature.

The Football Star Deluxe slot has an obvious football theme. The graphics and animations aren’t as sharp as other slots but have a video game feel. Let’s say it’s more Championship than Champions League. The game was released to coincide with the Euro 2020 football tournament.

With a football stadium forming the backdrop, symbols include football boots, football shirts, football pitches and referees. You’ll also see 4 football players with the star striker paying the most. 3, 4 or 5 in combination will pay 0.31, 1.45 or 6.68 x your stake.

The Football Star Deluxe logo symbol is the wild symbol and appears on reels 3, 4 and 5 in the base game. It appears super stacked in the base game and Free Spins feature. As you’d expect from a wild symbol, it substitutes for all symbols except the trophy scatter.

Produced in HTML5, you can play Football Star Deluxe on desktop, mobile and tablet devices. If your devices uses an iOS, Android or Windows operating system, you’re in luck.

The Football Star Deluxe slot may look like the original Football Star slot but it’s been improved as is offers more in every aspect. With 4 payline options, the max win of 3,200 x stake per free spin is definitely appealing. If you’re a footie fan and like slots, it’s a match made in heaven.

The 88 payline version is the best as the RTP is high at 96.88%. You should also try the Super Striker slot by NetEnt which is different in terms of gameplay but offers bigger wins.

What is the Football Star Deluxe slot RTP?

The Football Star Deluxe slot RTP varies from 96.18% (for the 18 payline version) up to 96.88% for the 88 payline version. Whilst the latter will cost more per spin, the potential return is worth the investment and should see your bankroll last quite a long time.

What is the Football Star Deluxe max win?

The Football Star Deluxe slot offers top wins of 3,200 times your total stake on each free spin. To win this, you need to achieve an 8x multiplier in the Free Spins feature and fill the reels with the high value football striker symbol and/or wilds.

Is there a Football Star Deluxe free play version?

Yes – you can play Football Star Deluxe for free here at Online-Slot.co.uk. Opt to play using your laptop/PC (desktop), mobile or tablet device. If you’re from the UK, you will need to verify your age as per the UKGC’s regulations. The simple process takes under 1 minute.

Does the Football Star Deluxe slot have free spins?

Yes – Football Star Deluxe has a Free Spins feature where you’re awarded 12 free spins. Beginning with a 2x multiplier, each consecutive win increases the multiplier to 3x, 4x, 5x and finally 8x. With each free spin, the wild stacks increase by 1 which increases your chances of achieving the 3,200 x stake max payout.