Based on the Canadian music producer and superstar DJ of the same name, the deadmau5 slot is a 5 reel, 243 ways to win game from Microgaming. With a selection of tracks blasting away in the background, the action is just as hi-tempo as far as gameplay is concerned. Look out for Rolling Reels, wild reels and a Free Spins feature that awards 15, 20 or 25 free spins. Get on a run with the Rolling Reels during the free spins to the increase the multipliers up to 10x.  Find out more about this volatile slot in our detailed deadmau5 review.

Where to Play deadmau5 Slot

The setup in the deadmau5 slot is straightforward. The action plays out on a 5 reel, 3 row machine which offers 243 ways to win. Landing matching symbols or wilds on adjacent reels, starting from the leftmost reel creates a winning combination.

Stake levels here start at 20p per spin, rising to a maximum of £100 per spin. Click on the coins next to the spin button then move the slider to set your level. You can set 10, 25, 50 or 100 autospins if required. Click the lightning bolt if you want to ramp up the base and activate turbo spin mode.

The deadmau5 RTP is 95.22% which is a  little on the skinny side. The hit frequency rate is 31.52% so on average, you’ll land a winner just under a third of the time. The volatility though is high. The most you can win from a single spin here is 2,100 x your total stake. 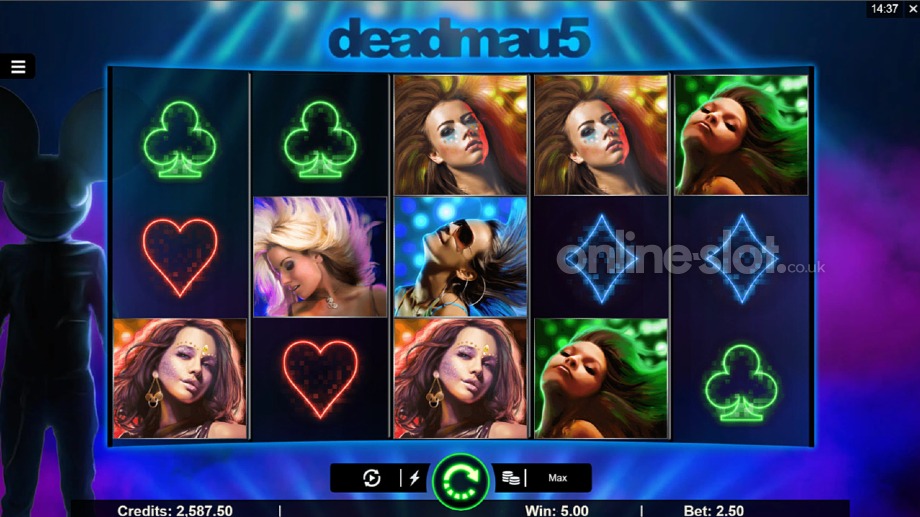 For the uninitiated, deadmau5 is the stage name of Canadian electronic music producer, DJ, and musician, Joel Zimmerman. For more information, you visit the official deadmau5 website.

Anyway, a nightclub is the setting for the deadmau5 slot game. The design is rather simple and understated. The soundtrack won’t be for everyone but overall, the design works pretty well. As you’d expect given its theme, you’ll hear some of the deadmau5 back catalogue pumping away while you spin. Tracks include 4Ware and Monophobia.

On the reels, you’ll see neon style heart, diamond, club and spade symbols alongside 5 dancing women. The lady with the face jewels is the highest value symbol giving you 0.5, 2.5 or 10 x your total stake for 3, 4 or 5 in combination. The deadmau5 logo symbol is the wild which substitutes for all symbols except for the scatter. The wild symbol can appear on reels 2, 3 and 4 only.

As usual for a Microgaming release, deadmau5 has been fully optimised for play on all devices including computers, tablets and mobiles. The slick sound and visuals are present and correct in all versions. The straightforward gameplay works very nicely on the deadmau5 mobile slot too.

As you’d expect from a slot based on a top dance music producer, deadmau5 is a high-octane affair. That’s not just the case with the sound and visuals, it also applies to the gameplay. There’s plenty going on here including Rolling Reels, wild reels and a bonus feature that offers free spins with dynamic multipliers.

Land a winning combination by hitting 3 or more matching symbols on adjoining reels, starting from reel 1. Winning symbols are then removed and new symbols drop down to replace them. A new payout consideration then follows. If you form a new winner, the process is repeated.

These ‘Reel Roll’s keep on coming as long as a new winning combination is created. The Rolls can deliver even more extras during the free spins round which we’ll look at below. The Rolling Reels feature has been used in plenty of Microgaming slots such as Immortal Romance.

Look out for the deadmau5 logo wild symbol appearing on the 3 middle reels. Randomly on any base game, you could benefit from the Drop the Wild feature. This turns the whole of reels 2, 3 or 4 wild. The Rolling Reels aren’t active when Drop the Wild feature triggers though. 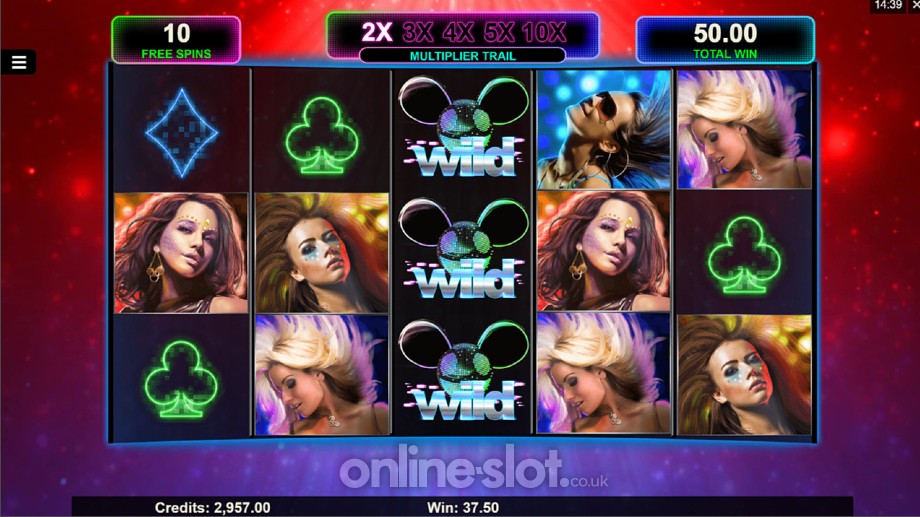 Landing 3, 4 or 5 scatters on the same spin activates the Free Spins feature. Your reward here is a payout equal to 5, 25 or 250 x your total stake as well as up to 25 free spins:

The Rolling Reels are active during the free spins, just like in the base game. The feature also comes with a Multiplier Trail.

Land successive Rolling Reel wins and you’ll bring 2x, 3x, 4x, 5x or 10x multipliers into play. At the end of each set of Rolls, the multipliers resets to its standard 1x. However, you cannot win additional free spins.

deadmau5 Review Summary – all about the free spins

The deadmau5 slot is a typically slick looking branded game from Microgaming. The imagery and sound are high spec.  The gameplay isn’t massively complicated but the combination of Rolling Reels, stacked wilds, free spins and expanding multipliers is a solid one.

The key to winning big is to get successive wins in the Free Spins feature which increases the multiplier up to 10x.  However, this branded game is highly volatile. If you’re not a dance music fan, this probably won’t be for you. You’ll find plenty of slots with similar features that aren’t quite so loud and in your face.

If you like the dance theme, the deadmau5 slot is certainly a game to consider. If you’re more of a rock fan, Play ‘n GO has plenty of rock-themed slot games.

What is the deadmau5 RTP?

What is the deadmau5 max win?

The most you can win from a single spin is 2,100 x your total stake. The bigger wins will come in the Free Spins feature where successive wins increase the multiplier up to 10x.

Is there a deadmau5 free spins feature?

Yes, land 3, 4 or 5 scatters and you’ll go on to play 15, 20 or 25 free spins in the Free Spins feature. Successive Rolling Reels bring expanding multipliers into play which can send payouts rocketing by up to 10x.

What are Rolling Reels?

Land a winning combination and the successful symbols are removed and new symbols replace them. Called the Rolling Reels feature, these ‘Reel Rolls’ keep on coming as long as a new winner is created. They come with even more goodies attached during the free spins.