Hunt for the Holy Grail and collect treasure as you try in the Avalon 2 slot, the second Microgaming game to be based on Arthurian legend. Played using a 5 reel, 243 ways to win game engine, it’s brimming with extras. They include a pair of randomly triggered modifiers that award instant cash prizes or multipliers or an expanding wild. Trigger the Grail Bonus and there are 8 potential features including a dice bonus, free spins with assorted extras, pick me rounds, battle bonuses and spin the wheel features. With 16,200 x stake payouts available from a single spin, find out more in our detailed Avalon II review.

Where to Play Avalon 2 Slot

The Avalon 2 slot is played using a simple 5 reel, 3 row, 243 ways to win machine. To create a winner, land 3 or more matching symbols or wilds on adjacent reels, starting from reel 1.

Stake levels here start at 30p per spin, rising to a maximum of £7.50 per spin. Click on the Autoplay button below the reels and pick the number of autospins you wish to run. It’s very simple to do.

The Avalon 2 RTP is 95.92% which is slightly below the 96% average. The hit frequency rate is 38.64% meaning over 1 in 3 spins will give you a winning outcome. The volatility here is in the medium range. When it comes to payouts, you can win up to 16,200 x your total stake per spin. 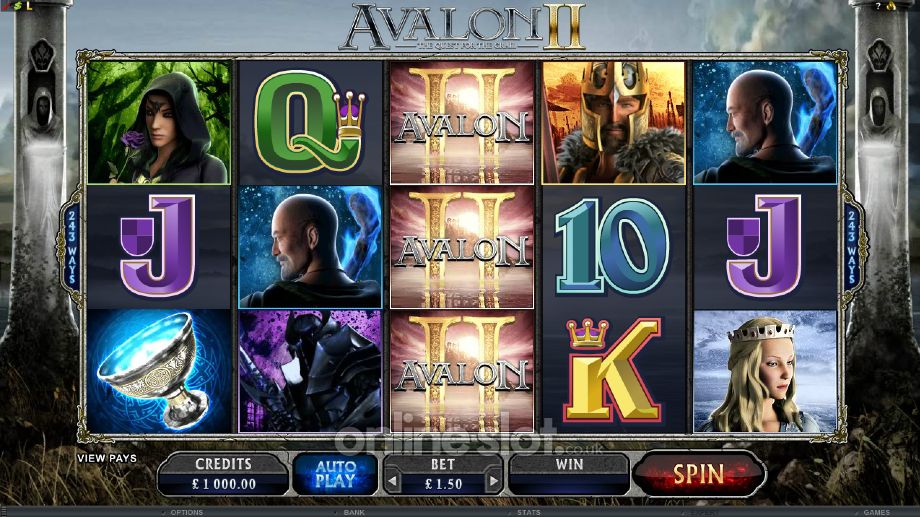 The Avalon 2: The Quest for the Grail slot (the official title) first hit the online casino shelves in January 2014 and despite its relatively veteran status, the design here has stood up pretty well. It doesn’t have the high def specs you’ll find from the latest slot releases but the visuals are more than good enough to play.

With an Arthurian legend theme, it is based on the legendary island where King Arthur’s Excalibur sword was forged. The orchestral score could come straight out of a movie adaptation. It has an epic sweep and delivers plenty of atmosphere. It’s might be an oldie but the sound and visuals here still impress in a retro kind of way.

The reels are made up of slightly blocky A to 9 royals alongside a cast of characters from Arthurian legend including Queen Guinevere, Merlin and of course, Arthur himself.  King Arthur is the highest paying symbol giving you 33.33 x your total stake for 5 in combination.

The Avalon 2 logo is the wild symbol. This substitutes for all symbols except the Lady of the Lake and the scatter. Importantly, it pays 66.66 x your total stake for 5 on a payline.

This slice of Arthurian legend is available to play on all devices including computer, tablet and smartphone. The Avalon 2 mobile slot offers the same massive range of extras as the desktop version.

If you like plenty of variety when it comes to bonuses and features, you’ve come to the right place in the Avalon 2 online slot. There are loads of extras here starting with a pair of modifiers. The action can really rev up during the Grail Bonus though where there are 8 potential feature rounds to work through as you try and track down the famous Holy Grail.

Avalon 2 comes with a pair of randomly triggered modifiers that can strike on any base game spin. Here’s what they offer you: 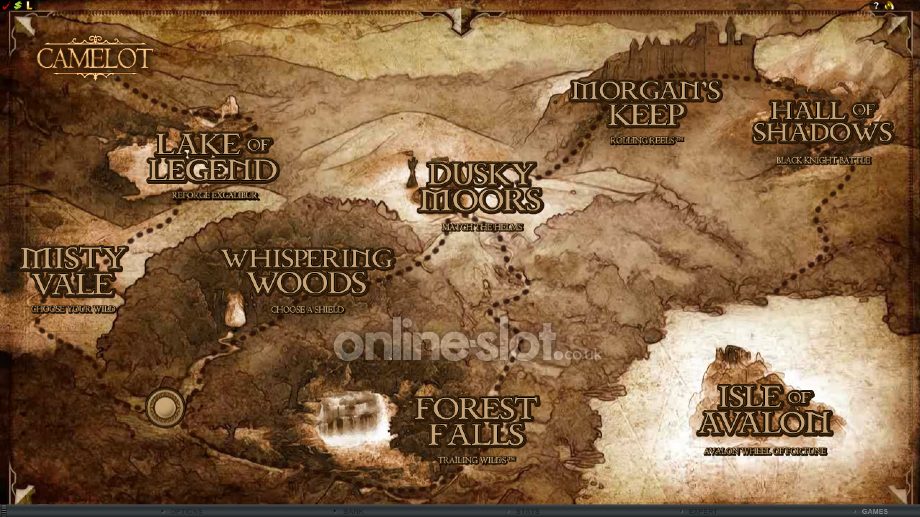 Land 3 or more Grail scatter symbols on the same spin to activate the Grail Bonus. This is a quest where the goal is to claim the Grail and safely return it to Avalon.

To complete your quest, you’ll work through a variety of bonus features. Features are unlocked in succession after you have triggered the Grail Bonus a specific numbers of times. Here’s what they entail:

With all the features on offer, the Avalon 2 slot sounds quite complicated. In reality, it’s actually a very straightforward game to play. That variety of bonus feature keeps things fresh and you shouldn’t get bored stuck playing the same old features over and over again.

Despite being released in 2014, the graphics still look good and tie in nicely with the Arthurian legend theme. If you love your slots, you will notice some of the sounds are the same as the Immortal Romance slot (also by Microgaming). The epic story does evoke emotion and intrigue.

The biggest wins will come from the free spins features, especially where the multipliers are concerned. I particularly like the Morgan’s Keep Bonus feature as you can play many free spins with a 6x multiplier. The max win of 16,200 x stake per spin is also very appealing.

The Avalon 2: The Quest for the Grail slot remains a popular game despite its old age for a good reason. If you like the Arthurian theme, this is a quest that remains well worth making. Another option would be The Sword and the Grail slot by Play ‘n GO which offers 10,000 x stake wins on every free spin.

What is the Avalon 2 RTP?

The Avalon 2 return to player rate is 95.92% which is about average. You won’ have to wait long for a win as the hit frequency is 38.64%. The variance is in the middle so nicely balanced.

What is the Avalon 2 max win?

The biggest possible win in Avalon 2 is a whopping 16,200 x your total stake. Your chances increase in the Morgan’s Keep Bonus feature which can give you a multiplier up to 6x on each free spin.

Is there an Avalon 2 free spins feature?

Yes, there are actually 3 free spins features which can be accessed via the Grail Bonus. They come with Rolling Reels and increasing multipliers, an extra wild with a 2x multiplier and trailing wilds.

Is there an Avalon 2 mobile slot?

Yes. Avalon 2 can be played on mobile and tablet devices, as well as desktop. The simple 5×3 layout works rather well on smartphones. The epic soundtrack and graphics look great on handheld devices too.