Join the ancient Greek god of the Sea in his underwater lair in the Ancient Fortunes: Poseidon Megaways slot. Created by Triple Edge Studios for Microgaming, it’s a 6 reel, Rolling Reels slot where the number of Megaways can get as high as 117,649. Feature highlights here include a Free Spins feature where Rolling Reel wins bring an expanding multiplier into play. There’s also a pick and click feature where you could land 1 of 4 potential jackpot prizes worth up to 5,000 x stake. Find out more about this ocean adventure in our Ancient Fortunes: Poseidon Megaways review.

Winning combinations are created by landing 3, 4, 5 or 6 matching symbols or wilds on adjoining reels, starting from reel 1. Stake levels here range from between 40p and £40 per spin. Use the + and – tabs in the bottom left-hand corner of the reels to adjust your stake.

The Ancient Fortunes: Poseidon Megaways RTP is 95.98% which is just below the 96% average. It comes with a 33.1% hit frequency rate meaning nearly a third of spins will result in a winning outcome.

Medium variance, you can win up to 10,000 x your stake in the Free Spins feature. 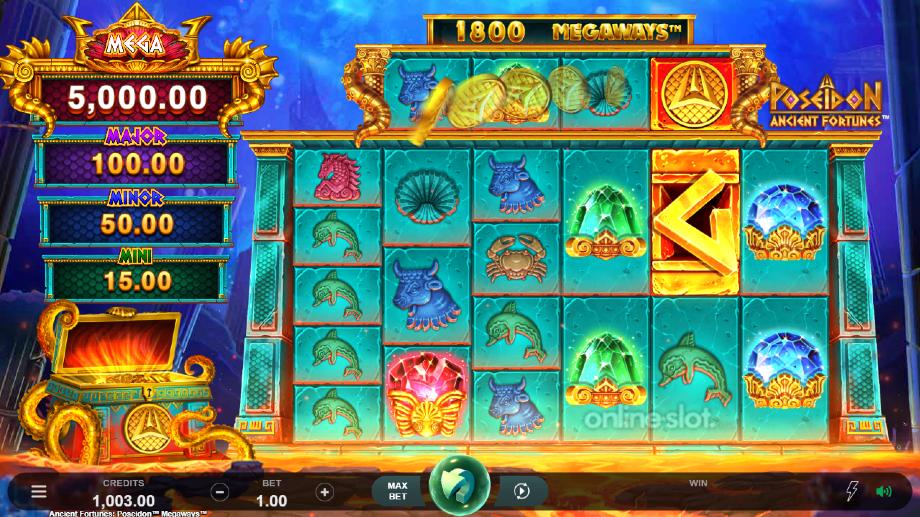 The sea god’s underwater palace is the setting in the Ancient Fortunes: Poseidon Megaways. With a Greek mythology theme, it’s based on the Greek God of the Sea (Poseidon). As you might expect given the theme, shades of blue and turquoise dominate the colour scheme.

There’s a rather haunting orchestral soundtrack playing in the background while you spin. It’s rather atmospheric and is an ideal complement for the rather psychedelic imagery.

On the reels are stylized shell, crab, dolphin, bull’s head, sea horse and octopus symbols as well as 3 brightly coloured gemstones. The most lucrative standard symbol is the gold icon of the head of Poseidon which pays 50 x your total stake if you land 6 in combination.

There’s also a trident wild that can land in the top position on the middle 4 reels. This replaces all the standard symbols when it makes up part of a winning combination. Finally, there are gold scatter symbols which trigger the game’s Free Spins feature.

You can dive deep beneath the waves on mobiles and tablets if you wish. The unusual design works well enough on the smaller screen devices but it’s a game I preferred to play on a larger screen.

With 3 bonus features, the gameplay here is pretty standard for a slot with the Megaways mechanic. The main extra is the Free Spins feature with an increasing multiplier. Poseidon also offers a chance to scoop one of 4 jackpot prizes courtesy of a pick-and-click feature.

The Rolling Reels feature is in play here. After a winner is formed, the successful symbols are blasted off the reels and new symbols drop in and replace them and a new payout consideration is made. If a new winner is formed here, the process is repeated. The Reel Rolls keep on coming as long as there’s a new winner on show. 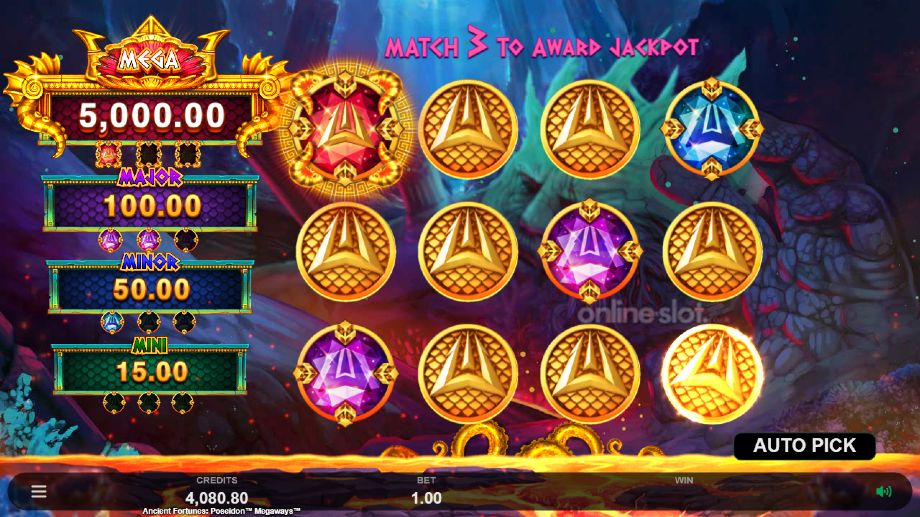 The Jackpot Pick Game feature can activate at random on any spin when all the Reel Rolls have been completed. Once triggered, you’ll be offered the pick of 12 tokens.

Each token has an associated jackpot prize. Keep on picking until you uncover 3 that feature the same jackpot. You’ll then win that prize. With the fixed jackpots displayed to the left of the reels, the top prize is 5,000 x your total stake: 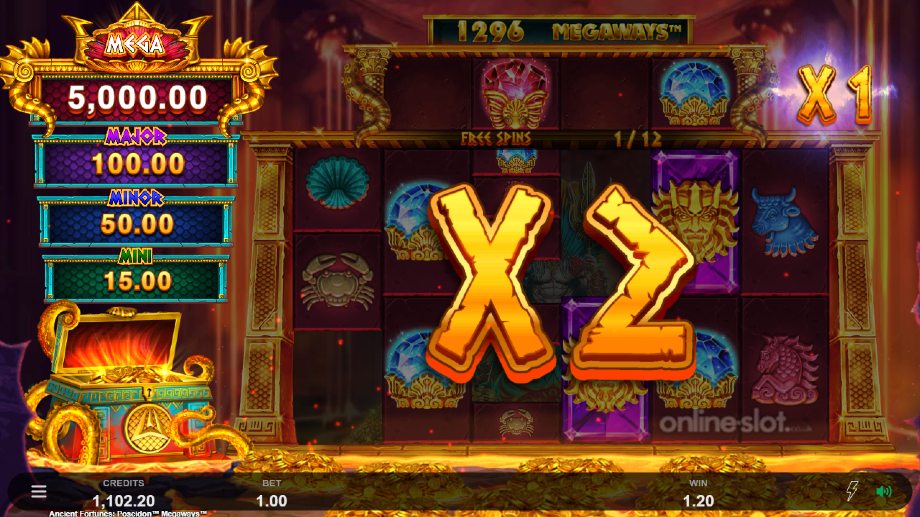 Spell out the word GOLD with scatter symbols and you’ll trigger the game’s Free Spins feature. Your reward is 12 free spins. Any extra scatters that appear on the triggering spin will add another 5 free spins to that initial haul of 12. This means triggering with 5 or 6 scatters will give you 17 or 22 free spins respectively.

The win multiplier starts at a standard 1x. Each time you land a Rolling Reel win, that multiplier increases by 1. Multipliers don’t reset following a winless Roll either, they keep on rising throughout the feature and with no limits.

Land 3 or 4 scatters in the window at the top of the reels and you’ll get another 5 or 10 free spins. Again, the number of free spins is unlimited. You can land the Jackpot Pick Game feature from within the free spins, just like in the base game.

The Ancient Fortunes: Poseidon Megaways slot is a pretty standard Megaways slot. The basic Rolling Reels mechanic delivers steady gameplay but there’s little in the way of embellishments to liven up the base game.

It’s a similar story to the Free Spins feature. I’ve seen the same free spins and increasing multiplier combinations in loads of other slots. The Jackpot Pick Game feature offers some decent opportunities but that’s the only tweak that Microgaming has made to the standard Megaways offering.

It’s all perfectly solid but Ancient Fortunes: Poseidon Megaways doesn’t have much in the way of a wow factor. It’s decent but not spectacular. As the name suggests, Microgaming will release more Ancient Fortunes Megaways slots. Let’s hope future games have more variety in the gameplay.

If you want more underwater adventures, Lord of the Ocean by Novomatic is a hugely popular land-based and online favourite. Poseidon also features in Playtech’s Age of the Gods which comes with 4 free spins features as well as 4 progressive jackpots. Alternatively, check out our Megaways slots page for a list of the best games around using this popular mechanic.

What is the Ancient Fortunes: Poseidon Megaways RTP?

The Ancient Fortunes: Poseidon Megaways RTP is 95.98% which is standard. Medium variance, you’ll land a win every 3 spins or so as it has a hit frequency rate of 33.1%.

What is the Ancient Fortunes: Poseidon Megaways max win?

The max win per spin is 10,000 x your total stake. The key to big wins is the increasing multiplier in the free spins which can only grow, with no limits.

No, this ancient underwater adventure offers a shot at landing 4 fixed jackpots via the Jackpot Pick Game feature. The best of them is the Mega Jackpot which pays 5,000 x stake.

Are there any Ancient Fortunes: Poseidon Megaways free spins?

Yes, the Free Spins feature begins with at least 12 free spins with unlimited extra ones to be won. These come with an increasing win multiplier which increases by 1 with each Rolling Reels win, again with no limits.

Is there a Ancient Fortunes: Poseidon Megaways demo?

Yes, you can play the Ancient Fortunes: Poseidon Megaways demo here at Online-Slot.co.uk. Spin away underwater at the scene of the ruins of Atlantis on desktop as well as all iOS and Android devices