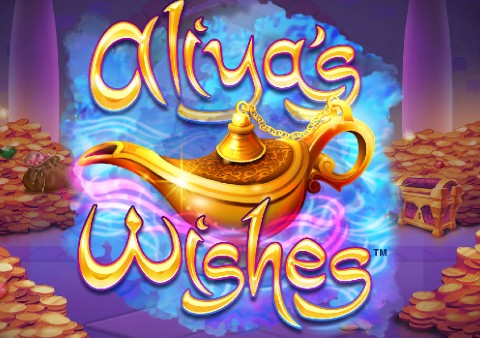 The classic tale of the Aladdin and his magic lamp gets a gender defying makeover in the Aliya’s Wishes slot, a 5 reel, 20 payline game from Microgaming. The star here may be female but the usual magic lamp can still deliver the same magical rewards.

In our detailed Aliya’s Wishes review, you’ll find out about a Rolling Reels game engine and expanding multipliers which increases with each successive Rolling Reel win. Trigger the feature and you’ll get to play with up to 40 free spins with bigger multipliers. Double your best game bet to activate the Win Booster and the multipliers can get as high as 50x when you trigger the bonus round. Let’s see if Aliya’s Wishes match up to yours.

Where to Play Aliya’s Wishes Slot

In the Aliya’s Wishes slot, the story of the magic lamp that can make wishes come true is as old as it gets. The gameplay here is bang up to date though. Boosting your winning chances are Rolling Reels, stacked wilds, expanding wilds and free spins. Let’s see how they shape up.

The Rolling Reels also bring multipliers into play. The first win pays out at a standard 1x. Each successive Reel Roll win is boosted by an increasing multiplier:

Things can get even bigger during the Free Spins feature too. 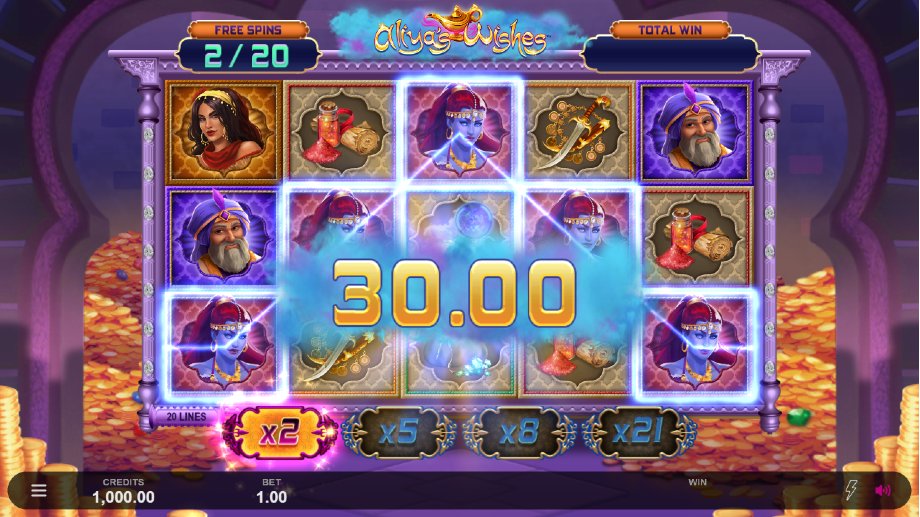 The magic lamp is the scatter symbol. Land 3, 4 or 5 of these anywhere on the reels on the same spin and you’ll trigger the Free Spins feature. Your reward is 10, 15 or 20 free spins.

The Rolling Reels game engine is in play during the feature. Here though, the multipliers awarded to successive Reel Rolls increases:

That’s a big potential jump from the 1x, 2x, 3x and 5x on offer in the base game. It’s almost identical to the Avalanche Reels feature from the Gonzo’s Quest slot (NetEnt) but with higher multipliers. Play with the Win Booster feature active and those multipliers can get even higher.

The Win Booster feature doubles the size of your stake on each base game spin. It doesn’t offer anything in the base game but can really get things moving during the free spins.

The multiplier in the Free Spins feature starts at 5x. Land 2, 3 or 4 successive wins from a single set of Reel Rolls and the multiplier rockets to 12x, 21x and a massive 50x.

If you fancy having a crack at the Win Booster, click on the blue jewel located on the left-hand side of the reels.

There’s nothing hugely complicated about the gameplay and features in Aliya’s Wishes. The action takes place on a 5 reel, 3 row machine that offers 20 paylines.

Bet levels range from between 10p and £30 per spin in standard mode. If you want to play with the Win Booster feature active, those limits rise to between 20p and £60 per spin. It’s possible to set up autoplay if required. You can also play at standard speed or take things up to turbo mode if required.

What is huge though is the variance. The Aliya’s Wishes volatility is extremely high so you can expect some big potential bankroll swings here. The max win is 3,715.3 x your total stake per free spin. 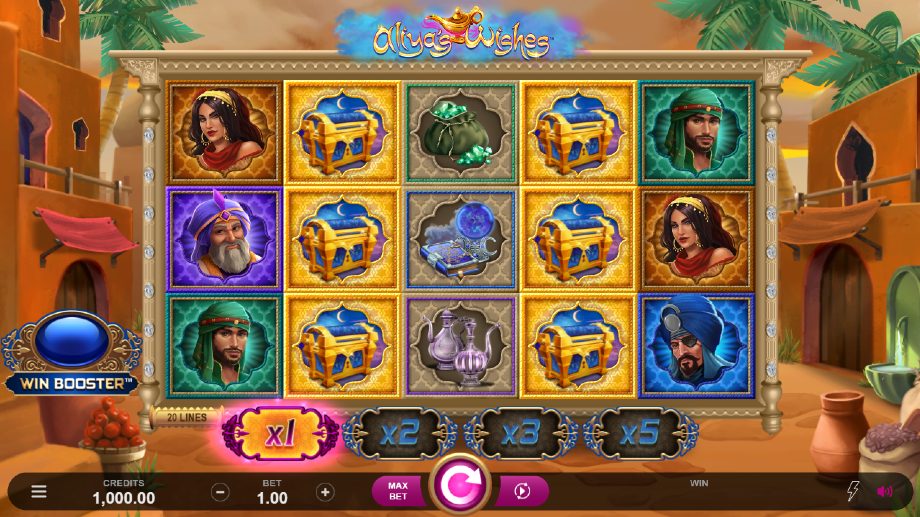 The Aliya’s Wishes slot is a feast for the senses. The colourful visuals here are terrific. They’re packed full of details and provide plenty of atmosphere. With an Arabian village in the background, all the symbols relate to the theme. There’s no playing card filler here.

Symbols on display include pots of tea, jewels, swords, money pouches and spices as well as 5 higher paying character symbols. The blue-faced genie tops the payouts, awarding 1, 3 or 15 x your total stake if you land 3, 4 or 5 on a payline.

The gold treasure box which is the wild. This replaces all the standard symbols in winning combinations. It offers the same payouts as the blue genie.

The ornately designed visuals work just fine on a smaller screen device. The simple but potentially explosive gameplay are well suited to tablet and mobile play too. No complaints here.

This reworking of the classic tale from the ancient world is very nicely done. The design is terrific: colourful and packed full of detail but also neat and crisp.

We’ve seen similar gameplay and features in many other slots. The Win Booster, and the potential multipliers of 50x add an extra level to the gameplay though. The super high variance means that it’s not for the faint-hearted.

We liked this trip to ancient Arabia. It looks excellent and the Rolling Reels and multipliers can deliver some cracking action. If you want more slots with the Rolling Reels feature, Microgaming has plenty. You cannot get better than Immortal Romance though which is probably Microgaming’s most popular offering.

What is the Aliya’s Wishes slot RTP?

Is there an Aliya’s Wishes free spins feature?

What is Aliya’s Wishes Win Booster?

The Win Booster feature is a supercharged multiplier that is active if you get on a run of consecutive symbol drop wins during the feature. These can boost payouts by 5x, 12x, 21x and even 50x in the Free Spins feature. It costs double your standard stake to activate the Win Booster.