Landing a bumper catch of coins is the goal in the Extreme Fishing slot, a 5 reel, 25 payline game from Lightning Box Games. Highlights here include the Shark Attack feature where any of the 3 most rewarding fish symbols turn wild for a spin. The main feature is a Free Games feature. Once triggered, you can look forward to playing 10, 20 or 30 free spins. You’ll also have a chance to trigger the Fishing feature where you can land prizes of up to 1,000 x your stake. See what else this angling expedition has to offer in our in-depth Extreme Fishing review.

Where to Play Extreme Fishing Slot

The Extreme Fishing slot comes with 5 reels, 3 rows and 25 fixed paylines. A win is created by getting 3, 4 or 5 matching symbols across a payline from left to right and starting from reel 1 .

You can take to these virtual waters at stake levels that range from between 25p and £150 per spin. Just click on the coins symbol to adjust your stake size. Autoplay is available too. You can run between 10 and 100 autospins, but there are no options to set win or stop loss limits.

The Extreme Fishing RTP of 95.84% is a little on the low side. These waters might look rather gentle but don’t be fooled. This slot lives up to its name as far as variance is concerned. The Extreme Fishing volatility is high. The most you can win from a single spin is 1,500 x your total stake. 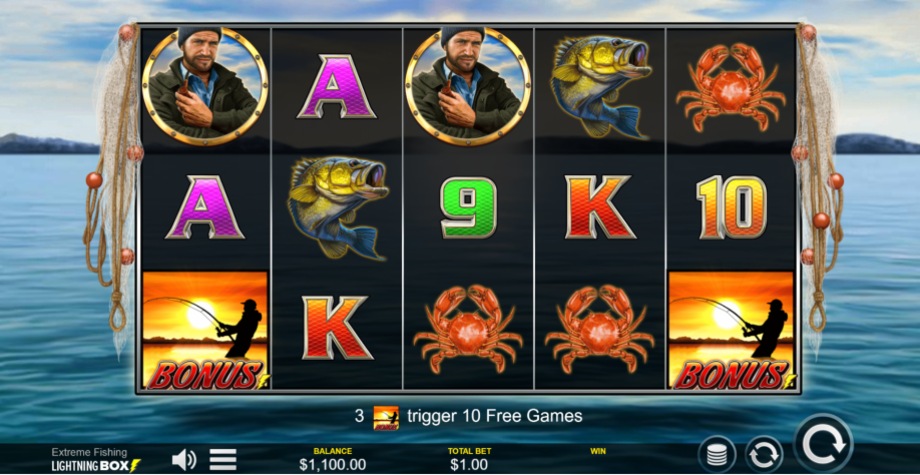 Visually, Lightning Box Games has kept the design pretty simple though. The visuals here aren’t the sharpest you’ll see. That’s no great surprise given the theme though. There’s a gentle soundtrack playing while you spin which is rather nice. You’ll have the option to play with the music, ambient noise, neither or both. Head to the settings and just accordingly. You wouldn’t call Extreme Fishing a design classic but it does the job.

Set against a coastal backdrop with hills on the horizon, the waters here are relatively tranquil. On the reels, you’ll see lower value royal value alongside a crab and a starfish. They’re accompanied by 3 higher paying fish symbols (these are the ones that transform into wilds in the Shark Attack).  The top standard symbol is the bearded fisherman who will get you an award equal to 20 x your stake if you land 5 on a payline.

Lightning Box Games has created an Extreme Fishing mobile slot. You’ll find the same simple design and explosive features that are on offer in the desktop version. It works well enough.

The theme here is a simple one but Extreme Fishing offers a number of bonus features which can deliver plenty of action. They include random wilds, up to 30 free spins and the Fishing feature. We’ll start by looking at the Shark Attack.

The Shark Attack feature can trigger at random on any spin. A school of animated sharks swims across the reels, gobbling up the 3 highest paying fish symbols and turning them into wild symbols for a single spin. All these potential extra wilds can deliver some big rewards. 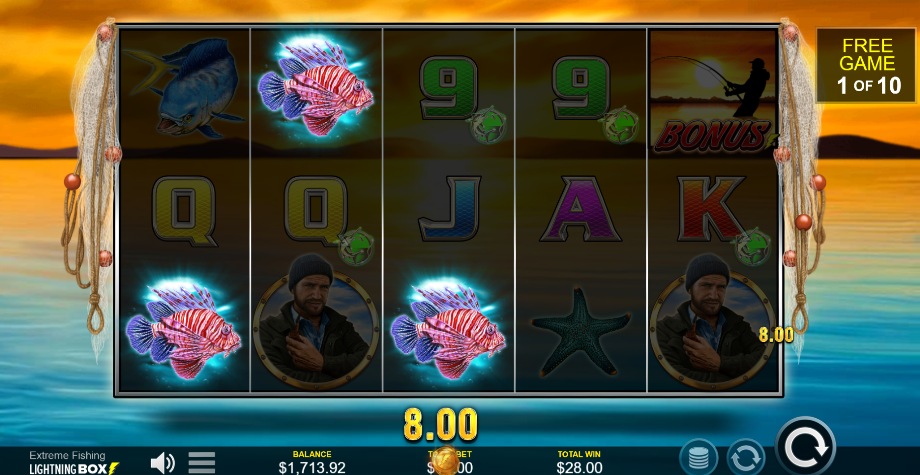 The silhouetted fisherman is the game’s scatter symbol. Land 3, 4 or 5 of these anywhere on the reels on the same spin and you’ll win an award of 2, 10 or 500 x your stake. You’ll also activate the Free Games feature. The more scatters, the more free spins:

The Shark Attack feature can land in the free spins, just like in the base game. 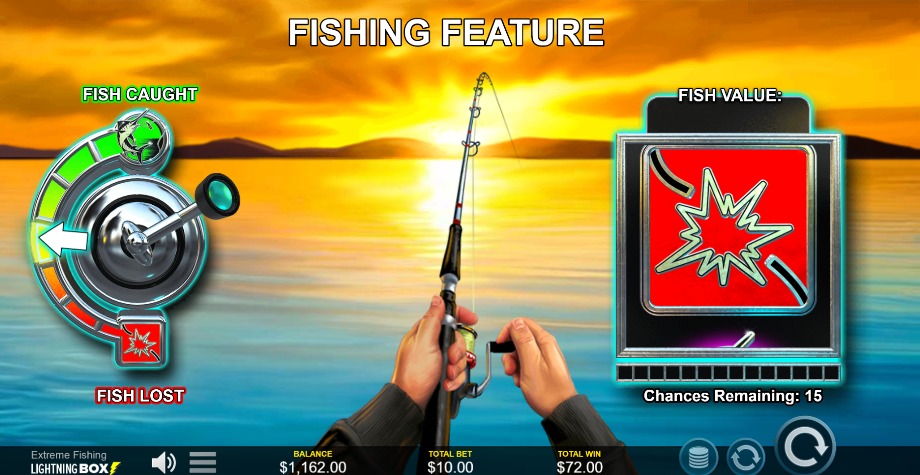 During the Free Games feature, look out for the green swordfish symbol. Land 5 of these on the same spin and you’ll trigger the Fishing feature.

A fisherman then casts off. On the right of the screen you’ll see whether he catches something. If he does, you’ll see a green fish symbol, complete with a cash value attached. If you see a red symbol, he’s caught nothing.

To the left of the screen is a meter. Each time the fisherman lands a fish, you’ll move 1 spot up the meter. If he lands nothing, you’ll move down one space on the meter.

The fisherman keeps on casting his line until he’s used up all 15 attempts or as soon as he’s caught enough fish to reach the top of the meter. All the values from the caught fish are combined to give you your overall prize. Prizes can reach up to 1,000 x your total stake.

You’ll then return to the Free Games feature to play out any free spins you have left. It’s possible to land the Fishing feature multiple times from within a single free spins trigger.

The Extreme Fishing slot doesn’t dazzle visually. The design is functional rather than being a thing of beauty. The features here stack up pretty well too. The Fishing feature within the free spins is rather unusual but can pep up what is a rather ordinary free spins bonus.

It’s no Deadliest Catch but Extreme Fishing, with its volatile action, lives up to its name. If you like fishing, Microgaming’s Wild Catch slot offers 9,000 x stake payouts. Another option is the Fishin’ Frenzy Megaways slot by Blueprint Gaming  which offers 10,000 x stake wins on every free spin.

What is the Extreme Fishing slot RTP?

The Extreme Fishing return to player rate is a little on the low side at 95.84%. These waters might look tranquil but they can be rather choppy when it comes to your bankroll.

What is the Extreme Fishing max win?

The maximum win from a single spin is 1,500 x your stake. The bigger wins will come by filling the reels with shark wilds. Extreme Fishing is a high variance slot though so tread carefully.

Is there an Extreme Fishing free spins round?

Yes, trigger the Free Games feature by landing 3, 4 or 5 scatters and you’ll play 10, 20 or 30 free spins. You can also land the Fishing feature from within the free spins where an angler catches fish to deliver extra awards of up to 1,000 x stake.

Where can I play the Extreme Fishing slot?