Take classic fruit machine visuals, a Megaways mechanic with cascading reels, a bonus wheel that can deliver 10 different modifiers and a free spins feature with expanding multipliers and you’ll come up with something like the Hot Spin Megaways slot. Created by iSoftBet, it’s a 6 reel game where the number of ways to win reach up to 117,649.  Some Megaways slots can be a little repetitive but that’s certainly not the case here thanks to the wide range of bonus features. Trigger the Free Spins feature and you’ll have the choice of a variety of free spins and starting multiplier combinations. Explore our in-depth Hot Spin Megaways review to find out more.

The Hot Spin Megaways slot is playing using a 6 reel, cascading wins machine. The number of symbols that appear on each reel changes with each spin. The more symbols, the more ways to win. If all 6 reels contain the maximum number of symbols, you’ll have 117,649 Megaways in play. Create winning combinations by landing 3 or more matching symbols or wilds on adjacent reels, starting from reel 1.

You can play at stake levels that range from 20p to £20 per spin. Click on the coin icon then use the + and – buttons to adjust. Click on the ‘i’ button to access the paytable. Payout amounts are shown in cash and relate to your current stake level.

The Hot Spin Megaways RTP is 95.98% which is marginally lower than the 96% average. The volatility is high so don’t expect big wins often.

The maximum potential win here is 50,000 x your total stake per spin. 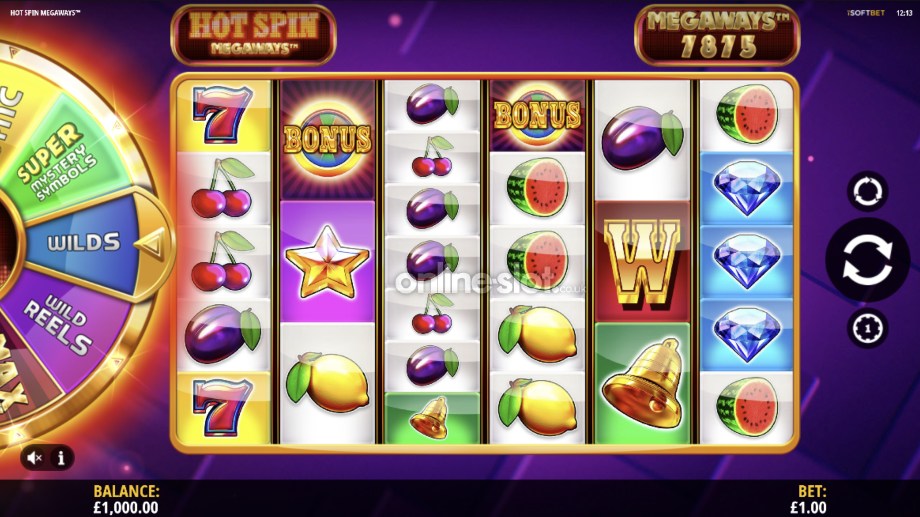 The Hot Spin Megaways slot has the look of an old school fruit machine. It’s the Megaways version of Hot Spin and Hot Spin Deluxe which are 2 of iSoftBet’s most popular releases. Like its predecessors, the design here is simple but the colourful imagery is lovely and crisp against the white reels.

The soundtrack is fresh and modern and complements the visuals nicely. It sounds like an Ibiza chill out tune. It’s all quite simple but does the job very well.

The reels include cherries, lemons, plums, melons, bells, stars and lucky 7s. The top standard symbol is the diamond which pays 50 x your total stake if you land 6 on adjoining reels. The W is the wild. This can appear on reels 2, 3, 4 and 5 only and substitute for all the standard symbols. Finally, there are the wheel bonus symbols that can trigger the free spins.

Produced using HTML5 technology, you can play the Hot Spin Megaways mobile slot on all devices including desktop and laptop computers, tablets and smartphones.

There’s plenty to get stuck into in Hot Spin Megaways when it comes to bonus features. A special bonus wheel can deliver one of 10 different modifiers in the base game. There’s also a free spins round, complete with an expanding multiplier, as well as even more modifiers. In total, there are 14 bonus features.

When a winning combination lands, the Cascading Wins feature applies and a cascade follows. The successful symbols are removed from the grid and new ones drop in and replace them. These cascades keep on coming as long as a new winner is formed. 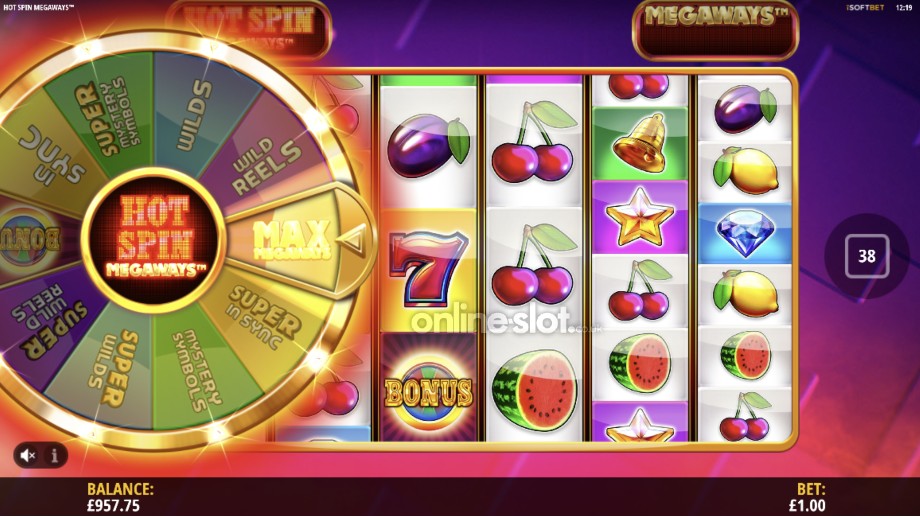 To the side of the reels, you’ll see the Hot Spin Wheel. This can activate at random on any spin. The wheel is made of 10 segments, each of which awards a special modifier feature. Once active, the modifier in the wheel window will be active for a single spin. Here’s what they offer: 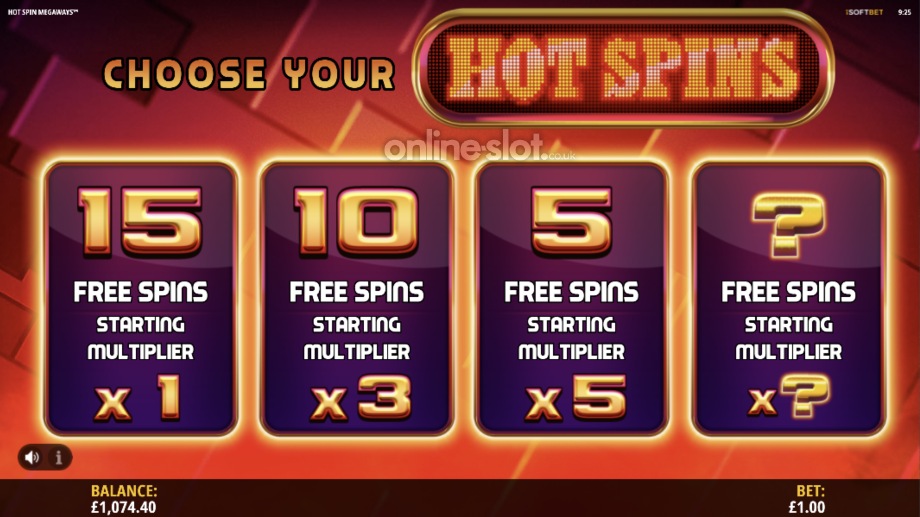 Trigger the Hot Spin Free Spins Bonus feature via the Hot Spin Wheel or by landing 4 or more Bonus symbols anywhere on the reels on the same spin. You’ll then be offered the pick of the following free spins and starting multiplier combinations:

When the free spins begins, an increasing multiplier is active. The multiplier increases by 1 with each cascade win created. This is known as the Unlimited Multiplier feature. The multiplier doesn’t reset following an unsuccessful cascade either, it continues to expand throughout the feature. Retriggers are possible here too. Land 2 or 3 Bonus symbols and another 3 or 5 free spins are added to your total.

The Free Spins Hot Spins Wheel feature is active during the free spins, just like in the base game. The modifiers on offer here are slightly different though:

The gameplay in some Megaways games can feel a little repetitive. There’s no danger of that in the Hot Spin Megaways slot though thanks to the wide range of modifiers which can really spice up the base game. Compared to the original and deluxe versions, there are more bonus features on offer.

However, the bigger wins will come Hot Spin Free Spins Bonus feature as you combine free spins, an increasing multiplier and lots of extras. I would personally begin with a higher starting multiplier due to the potential for bigger payouts.

Hot Spin can pay up to 500 x stake per spin whilst the Deluxe version offers up to 5,000 x stake. If you take Hot Spin Megaways, the max payout is 50,000 x stake per spin. This arguably makes it much more appealing as it offers much bigger potential wins and more bonus features.

Other slot providers have created Megaways versions of popular slots, like Gonzo’s Quest Megaways from NetEnt and Fluffy Favourites Megaways from Eyecon. iSoftBet has taken 1 of their best releases and made it much better which is not always the case with Megaways adaptations.

What is the Hot Spin Megaways RTP?

The Hot Spin Megaways RTP rate is 95.98% which is average. The hit frequency rate is 32% so expect a win in a third of spins on average. The variance is high.

What is the Hot Spin Megaways max win?

The maximum win in Hot Spin Megaways is 50,000 x your total stake from a single spin. The bigger wins will come in the free spins due to the increasing multiplier.

What are the Hot Spin Wheel Modifier features?

The Hot Spin Wheel can trigger randomly on any base game spin and bring Hot Spin Wheel Modifier features into play. With 10 bonus features on offer, you can benefit from wilds, synced reels, wild reels, mystery symbols, Max Megaways and entry to the free spins.

Are there any Hot Spin Megaways free spins?

Yes, the Hot Spin Free Spins Bonus feature sees you pick from free spins and starting multiplier options. With an Unlimited Multiplier in play, a new Hot Spin Wheel is in play giving you more modifiers. You can also win extra free spins.

Is there a Hot Spin Megaways demo?

Yes, the free play version is available here at Online-Slot.co.uk. Explore all the bonus features before you go on to play for real at your chosen UK online casino.