Celtic fantasy is theme on offer in the Rainbow Wilds Megaways slot, a 6 reel game from Iron Dog Studio where the number of ways to win ranges from between 64 and 117,649 on each spin. Look out here for Mushroom Wilds which can expand and bring an increasing multiplier into play. Played using a tumbling reels game engine, the Free Spins feature is played when landing 4 or more successive tumbling reel wins. Joining the action here are sticky wilds as well as expanding multipliers which increase with each tumble. Find out more about this super volatile slot in our detailed Rainbow Wilds Megaways review.

The Rainbow Wilds Megaways slot is played on a standard 6 reel Megaways machine where the number of ways to win can range from between 64 and 117,649. The number of symbols that can appear on each reel varies with each spin. This has an impact on how many different ways you can create a winning combination.

The minimum number of ways to win is 64. If all 6 reels show the maximum number of symbols, you’ll have 117,649 Megaways in play. Winners are formed by landing the same symbol or wild on adjoining reels, starting from reel 1.

Stake levels here range from 10p to £50 per spin. Click on the coins below the reels and adjust to suit. You can set between 5 and 999 autospins. There are options to set win and loss limits here too. You can also end autoplay whenever you trigger the free spins.

The Rainbow Wilds Megaways RTP is 95.82% which is just below average. Be warned though. This is an extremely volatile slot. The variance is high. The maximum win comes in at 12,000 x your total stake.  . 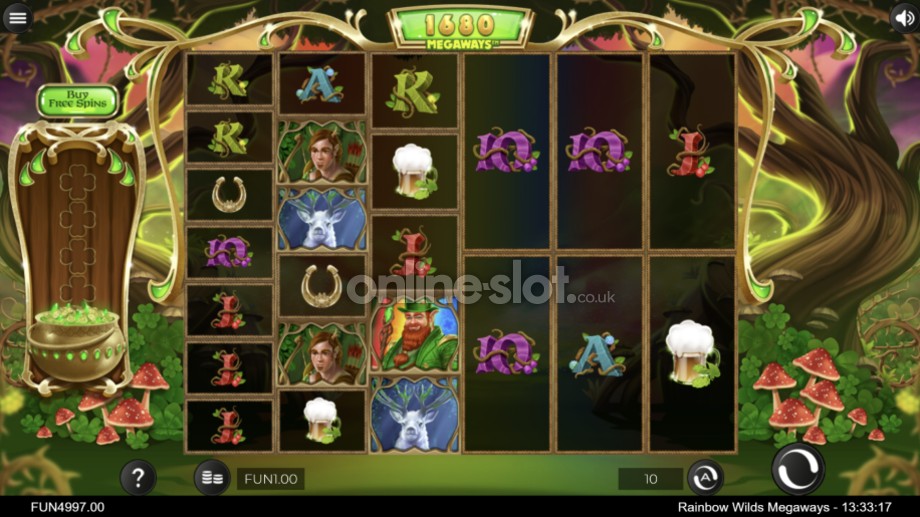 A rather trippy looking Celtic woodland is the setting for Rainbow Wilds Megaways. With a Celtic theme, there’s a slightly soft-focus look to the imagery here. Accompanying the action is a rather gentle soundtrack that has a hint of magic about it. The design isn’t the sharpest you’ll see but it does the job well enough. For your reference, producer Iron Dog Studio developed the Rainbow Wilds slot which is very similar.

On the reels you’ll find A to 9 royals covered in vines and creepers. They’re joined by a glass of beer, a heart, a horseshoe, an elf and a white hart. The bearded leprechaun is the most rewarding symbol. This pays 5, 10, 30, 60 or 100 x your total stake if you land 2, 3, 4, 5 or 6 in combination. There are also 3 different types of wild symbol. The standard wild can land anywhere apart from reel 1.

Rainbow Wilds Megaways is available to play on smartphones, tablets and computers. Being a Megaways slot, I recommend you play on bigger devices like tablets, PCs or laptops to get the full experience.

There’s plenty going on in this magical woodland, starting with the tumbling reels game engine. Joining the standard wilds are Mushroom Wilds which can spread to other reels and activate multipliers. Trigger the main feature for free spins complete with sticky wilds and expanding multipliers.

Land a winning combination and the successful symbols are removed from the reels. New symbols drop down to replace the winning symbols and a new payout consideration takes place. The tumbles continue until no new winner is formed. This is called the Tumbling Reels feature.

Mushroom wild symbols can land on reels 3 and 4 only in the base game and the free spins. Each one that hits can spread up to 3 mushrooming wilds onto reels 2, 3, 4 or 5. Known as the Mushroom Wilds feature, a Mushroom wild landing on the same reel as a standard wild will increase the multiplier by 1. 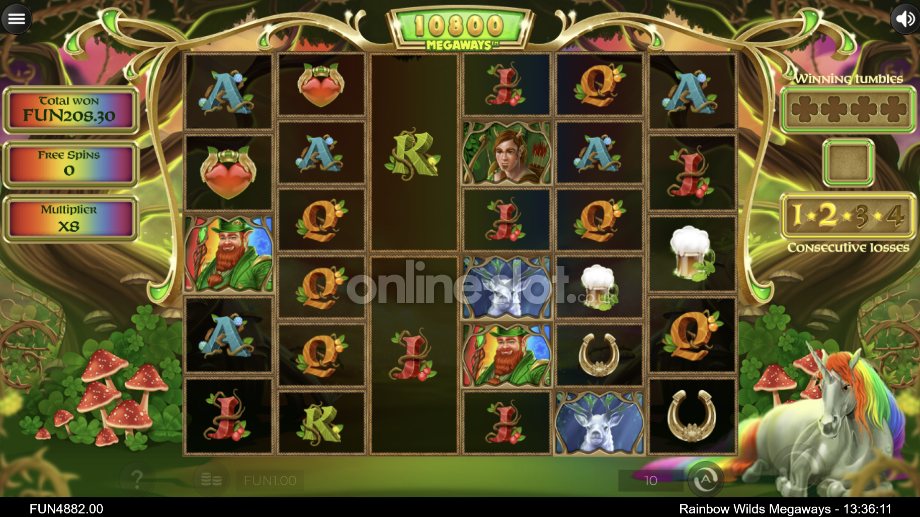 The Free Spins feature is triggered by landing 4 tumbling reel wins in succession. You’ll then receive 8 free spins. Another 2 free spins are added to your tally for each extra triggering tumble. The maximum number of free spins available is 14.

Joining the action during the free spins are sticky wilds which can hit on reels 2, 3 and 4 only. These come with an expanding multiplier which increases by 1 with each tumble. The multiplier resets when a new free spin begins.

The design in the Rainbow Wilds Megaways slot isn’t as madcap as some games that star grinning leprechauns. If the sound and visuals are rather understated, you can’t really say that about the gameplay. Many staples of the Megaways genre are present and correct here with a couple of innovations thrown in.

As usual, it’s the free spins where things can really start to motor thanks to the wild extras and the multipliers. The action here is extremely volatile so approach with care.

If you like the fantasy theme with a Celtic tinge, the unusual Rainbow Wilds Megaways is worth a look. However, it’s nowhere as good as 1 Million Megaways BC, also by Iron Dog Studio, which offers up to 1,058,841 Megaways and 50,000 x stake wins.

What is the Rainbow Wilds Megaways RTP?

The Rainbow Wilds Megaways return to player rate is 95.82%. Highly volatile, the RTP increases up to 96.3% if you buy your way into the free spins.

What is the Rainbow Wilds Megaways max win?

The maximum you can win from a single spin here is 12,000 x your total stake. The key to big wins is from the increasing multiplier which can apply in the base game and free spins.

Are they any Rainbow Wilds Megaways free spins?

Yes, the Free Spins feature is played when landing 4 or more tumbling reel wins in a row. Beginning with up to 14 free spins, you can win unlimited extra free spins. Look out for sticky wilds which will deliver multiplier boosts.

How does the Mushroom Wilds feature work?

The Mushroom Wilds feature sees Mushroom wilds land on reels 3 and 4. Every mushroom wild spreads to give you up to 3 mushroom wilds. If it appears on the same reel as a normal wild, the multiplier increases by 1.