Hope to turn magic beans into plenty of treasure in the Megaways Jack slot. Based on the fairy story and pantomime favourite, Jack and the Beanstalk, it’s a 6 reel slot from Iron Dog Studio where the number of Megaways can reach 117,649. Highlights of this volatile slot include tumbling reels which help you climb a beanstalk which can in turn lead you to the Giant’s Castle where free spins with multipliers await. Look out too for magic harps which can award added wilds, multiplier or help you up the beanstalk. The RTP is 96.2%. Found out more in our in-depth Megaways Jack review.

Where to Play Megaways Jack Slot

Many Megaways slots share a similar range of features. You’ll find the tumbling reels and shape shifting game mechanic in Megaways Jack. There are a few innovations worth noting here including Magic Harps which deliver modifiers and a free spins feature complete with multipliers.

If you land a winning combination, the successful symbols are removed and new ones drop down from a above to replace them. If this creates a new winner, the process is repeated. The tumbles continue until no new winner is formed or you trigger the free spins round.

Each successive tumbling win takes you 1 step higher up the beanstalk to the right of the reels. Reach the top and you’ll trigger the Free Spins feature (more on this below).

Magic beans can appear on tumbles. You’ll see 1, 2 or 3 beans appear which will take you 1, 2 or 3 leaves up the beanstalk.

This is a special modifier symbol. When 1 of these lands in the base game, it can award one of the following extras:

The Free Spins feature is triggered by making it up at least 8 leaves of the beanstalk. You’ll move up 1 leaf with each successive tumble or with the help of the Magic Beans or the Magic Harp. The higher up the beanstalk you go, the better the potential rewards on offer:

If a reel expands to its full 7 row height during the free spins, it locks in place guaranteeing the maximum Megaways of 117,649. It also adds 1 extra free spin to your total.

Furthermore,  the rewards on offer from the Magic Harp feature are slightly different during the free spins. Here it can award:

The Megaways Jack slot is played on a 6 reel machine. The number of symbols that can appear on each reel varies from between 2 and 7. This also alters the number of ways you can form a winning combination. This figure starts at 64 but can reach up to 117,649 if all 6 reels reach their maximum height.

Stakes in Megaways Jack range from between 20p and £20 per spin. You can set the bet level by clicking on the coins in the bottom left-hand corner of the screen. Click on the ‘A’ button to set up autoplay. You can run between 5 and 99 spins in a row. There are also options to set win and loss limits or end the autoplay mode when you trigger the feature.

The RTP is a reasonable 96.2%. The theme here might be rather gentle but don’t be fooled into thinking this is a gentle slot. The Megaways Jack volatility is very high indeed. This is a volatile slot. The max win is 25,000 x stake per spin or free spin. 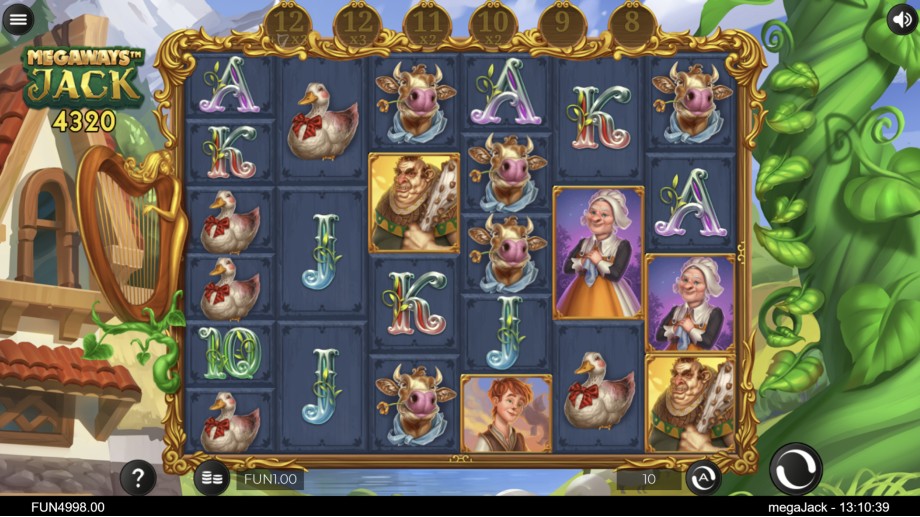 The fairy tale theme of Megaways Jack has been very well realised by Iron Dog Studio. There’s a lush orchestral backing track playing while you spin which gives the game plenty of atmosphere. There’s a cartoon feel to the visuals which are nicely drawn. It all comes together very nicely.

The visuals are rather good too. On the reels you’ll see A to 10 royals as well as symbols relating to the Jack and the Beanstalk tale. They include a cow, golden goose, granny and the giant. The most rewarding symbol is Jack who pays 25 x your stake if you land 6 in combination.

The Golden Egg symbol is the wild. Unusually for a Megaways slot, this can land on reels 2, 3, 4, 5 or 6 (it’s usually just the middle 4 reels). This replaces all the standard symbols. The Iron Dog Studio game interface is simple to use too. Click on the ? which will let you access the paytable and game info section.

All the positive stuff we’ve written about the desktop version also applies to the Megaways Jack mobile slot. The sound and imagery are terrific and the gameplay offers plenty of variety. You don’t need a big screen device to enjoy Megaways Jack.

Iron Dog Studio has taken the basic Megaways game mechanic and souped it up with some cracking extras to make the Megaways Jack slot. The Magic Harp modifiers can really get things moving, especially during the Free Spins feature when the multipliers can really come into their own.

It’s well designed too, combining classy visuals with a superb soundtrack. Add the super high variance into the mix and in Megaways Jack you have a very playable slot. You should also try Iron Dog Studio’s other Megaways title, Pirate Kingdom Megaways, which is also very enjoyable.

❓ What is the Megaways Jack RTP?

The Megaways Jack Return To Player (RTP) rate is 96.2%. That puts in in the middle of the pack in terms of rates of return. On average, for every £100 wagered, £96.20 is returned in prizes. Being high variance, the bigger wins will come from the Magic Harp feature, especially during the free spins.

? What is the Megaways Jack max win?

The most you can win from a spin or free spin in the Megaways Jackpot slot is 25,000 times your total stake. The likelihood increases in the Free Spins feature as the Magic Harp modifiers can increase the multiplier by 3 and give you extra wilds and free spins which can lead to more tumbles and increased multipliers.

? What features does Megaways Jack offer?

As well as the tumbling reels from the Megaways game engine, you’ll find Magic Harps that award multipliers, extra wilds or help you to trigger the Free Spins feature. That feature awards free spins with the potential for multipliers too. There’s plenty of action here.

⚡ Is there a Megaways Jack mobile slot?